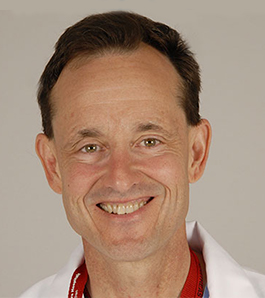 Rob Sheridan, M.D., graduated from Boston University's six-year medical program summa cum laude, Phi Beta Kappa and Alpha Omega Alpha. He attended school with a military scholarship, completed training in general surgery at Walter Reed, and served as a general surgeon in Honduras, Germany and Colorado. He then trained in burns, trauma and critical care at the Army Institute of Surgical Research (the Army's burn and trauma unit) in San Antonio and subsequently served in Germany as triage officer at the Landstuhl trauma center in support of Operation Desert Storm. Upon completion of his active duty military scholarship obligation, he joined the Massachusetts General Hospital Burn and Trauma Services and Shriners Children's where he has been active in burns, trauma and surgical critical care. He transitioned into the Army Reserve where assignments included humanitarian surgical missions and two deployments with Forward Surgical Teams in Afghanistan.

Dr. Sheridan has several active clinical research projects with funding from Shriners Children's, foundation, and industry. He has published over 250 papers, book chapters, editorials and online resources. Dr. Sheridan was a finalist for the Schwartz Center Compassionate Caregiver Award and Medal of Honor Foundation's Citizen Service Award and received the American Academy of Chest Physician's Governors Community Service Award. He is certified in surgery and in surgical critical care and is a fellow of the American College of Surgeons, the American Association for the Surgery of Trauma and the American Academy of Pediatrics.

Dr. Sheridan is director of the burn service at the Shriners Children's Boston and is an attending surgeon in the Massachusetts General Hospital burn unit. He is past president of the American Burn Association, a colonel (retired) in the US Army and a professor of surgery at Harvard Medical School.

Pediatric specialty care for children throughout Massachusetts and beyond