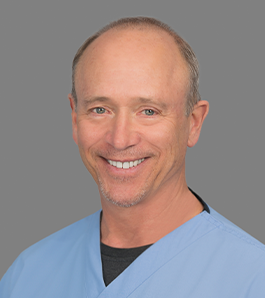 Following undergraduate and MBA degrees, and a successful seventeen-year business career, Fredric Bushnell, M.D., was accepted to the University of Illinois College of Medicine at the age of 42. He served as president of his class, rotated through the University of Edinburgh, Scotland and graduated in the honors program.

He attended the University of Pittsburgh Medical Center for internship, Loma Linda University for residency, and joined private practice at Huntington Memorial Hospital. In 2017, he joined the staff of Shriners Children's Southern California, where he helped develop a new model of N+1 anesthesia care with his mentor, John Scavone, M.D. (Sacramento). He concurrently created an opioid-sparing preemptive acute pediatric pain management protocol upon which he conducts outcomes research. He also serves on several national Shriners Children's medical advisory committees, including his chairmanship of the Anesthesia Executive Committee.

Dr. Bushnell has been an active clinician in medical/surgical missions overseas. As a result, he and his partner have six adopted children from Tanzania, one of whom is in his fifth year of medical school.