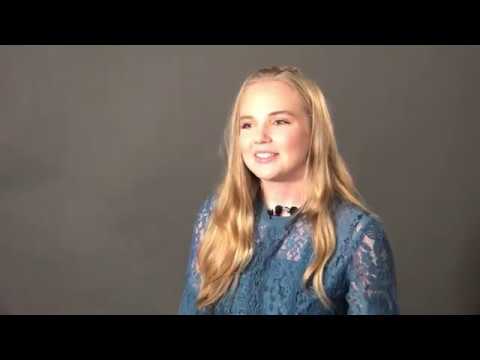 Katelyn: I'm Katelyn. I'm 16 years old. I'm a junior in high school. I was told that it was my curves were so severe.

R. Scott Cowan: Idiopathic scoliosis results from an imbalance in spine growth. So, in essence, one side of the spine has grown faster than the other side, which creates a curve.

Katelyn's curve when we initially evaluated her in November of 2015 was pretty big. It was about 48 degrees.

Katelyn: I met with Dr. Cowan for my first visit at Shriner's and he basically said my curve was in surgery range and it was very likely that I would have to get the surgery.

Karin: As a mom, as a parent, you want what's best for your child always. And I felt guilty because I thought that I had missed something. I felt overwhelmed because spine surgery sounded just beyond my comprehension.

R. Scott Cowan: The scoliosis operation is a fairly involved procedure where the spine is corrected, utilizing metal implants.

Katelyn: First, I thought that if I had to get the surgery to correct my scoliosis, I couldn't ride anymore and I love doing that. I couldn't play soccer anymore because that's a contact sport, and even maybe track I couldn't do because if I fell or something. So, that was really scary.

Karin: And the things that Katelyn loves doing, I think, would be limited if she had the surgery. We started researching different opportunities for Kate to get treatment for her scoliosis.

R. Scott Cowan: It's very important to offer all options available so that people can make an informed decision.

Karin: When we talked to the surgeons and we looked at the plan for what we would do with Katelyn .while she finished growing Shriner's gave us a lot of options.

R. Scott Cowan: It was still within that range that we could consider bracing, physical therapy, and non-operative care.

Karin: Dr. Cowan did suggest physical therapy would be a good option.

Katelyn: My physical therapist is a vet. She's awesome. First time I met her, she was so bubbly and energetic which was great because this was all new to me.

Yvette Santana: Each scoliosis specific exercise is specific to the type of curve they have. So, we first would have to, all the curves look similar in either a C or an S shape, but they're not all the same. And so what we look at which way the curve is going and which way the vertebrae are rotating and then we do exercises specific for that.

Katelyn: So, for my exercises, we started with just basic core exercises that wouldn't strain my back so that I could build a strong core that would be sort of the foundation for more of the invasive exercises that I was going to do.

Yvette Santana: Katelyn really was able to learn to correct her postural alignment and maintain that out of the brace and so in doing that, she was correcting her spinal curve. She was really compliant with the program and she started to see results.

Karin: And to hear the news at the end, we're not going to leave her on surgery watch.

R. Scott Cowan: That was a home run. So, yeah, it's great. It's wonderful to have a treatment regimen to work that well and particularly in a child like Katelyn who was really looking to avoid the more aggressive care options.

Karin: Everybody was very focused and very calming and all on the same team, it felt very inclusive or very connected and that was something that we didn't experience every place we went. So, I'm so glad we chose Shriner's hospital.

Katelyn: It's a really a nice feeling to know that I've come from something that the only option is surgery, we thought at that point, and now I'm out of surgery range and I can do what I always loves to do. My scoliosis now hasn't stopped me.