Scarlett bounces back after a burn injury from a fire pit.
Jan 12, 2023

It was August of 2020, the first summer of the COVID-19 pandemic. Looking for creative ways to spend more time outdoors, 2-year-old Scarlett’s family planned a festive backyard camping experience, complete with tents and a campfire.

The family spent an enjoyable evening with friends under the stars and everyone was excited to be spending the night in tents. Scarlett’s parents, Jenny and Nathan, were careful to extinguish the campfire before going to bed, and had made sure that their garden hose was at the ready the entire time it was being used.

The backyard campers awoke to a chill in the air and a light drizzle the next morning, so they went inside for breakfast. When the weather cleared that afternoon, Jenny took her daughter back outside where Scarlett accidentally stepped into the ashes of the extinguished fire pit. Even though hours had passed, the ashes were still hot enough to burn her feet.

“I was very surprised that the fire pit ashes were still so hot after all that time, especially with the rain that morning,” Jenny said. Jenny and Nathan were concerned that Scarlett’s burn injury was serious, and they wanted to be sure she received the right treatment. They took her to a local hospital where she was quickly referred to Shriners Children’s Boston for specialized burn care.

Scarlett was an inpatient at Shriners Children’s Boston for about three weeks and had several surgeries on her feet. Since then Scarlett has returned for follow-up surgeries, with the most recent in December of 2021.

Jenny said she learned from Scarlett’s care team that no two burns are the same, and it can be hard to predict how often a child will need surgery. In Scarlett’s case, she may not need additional surgery for another 10 years. “We were relieved to hear this news because that means Scarlett will be a teenager and better able to understand what is happening to her before the next surgery,” said Jenny.

I was very surprised that the fire pit ashes were still so hot after all that time, especially with the rain that morning.

Jenny recalled feeling overwhelmed in the days after Scarlett’s accident. “It was tough in the beginning, especially when we learned we would be coming back to the hospital throughout Scarlett’s childhood for follow-up care.”

Now, Jenny explained, Scarlett holds the hospital in such a positive light that she always wants to know when she can go back for a return visit. “She asks us when she can see her doctors and nurses. It is a completely different type of relationship which makes the idea of future surgeries much more palatable,” Jenny shared.

Child life specialists Hilary and Brooke were particularly important to Scarlett, especially during her inpatient stay. Through musical instruments and play therapy, they helped calm her. Jenny found a doll in a wheelchair with a cast for her foot, which also helped Scarlett process what she was experiencing.

During that initial stay, Scarlett had one dressing change a day. “Every day Hilary and Brooke made a point to come to the dressing change early with big smiles to distract Scarlett from the procedure, which was very difficult for her. That was so helpful, even for me, because every time Scarlett started crying, I would too,” Jenny said.

Nurses Diana and Alycia also made a lasting impact on Scarlett and her family. “Diana was reassuring and consoling, and we felt like she was really there for us,” said Jenny.

Now 4, Scarlett loves to dance, enjoys gymnastics and is attending preschool. Jenny, Nathan, Scarlett and big brother Daniel recently attended the Shriners Children’s Boston Haunted Walk. “We feel like we are part of the Shriners community and wanted to give back. And of course, who doesn’t want to celebrate Halloween? We all dressed up and came with our family and friends. And it was really special to see some of our care team outside of the hospital,” Jenny said.

Scarlett’s family wanted to share their experience in hopes that it might help other families. “I remember when I was in the hospital with Scarlett, I would go on the Shriners Children’s Boston website and read the patient testimonials, because they made me feel like my family would get through this. Everyone’s story is so different. Some of the stories were about teenagers reflecting on a childhood injury. Some were even adults looking back, and that was so helpful because I felt like everything would be alright,” said Jenny.

She is an active child who loves dance and gymnastics. 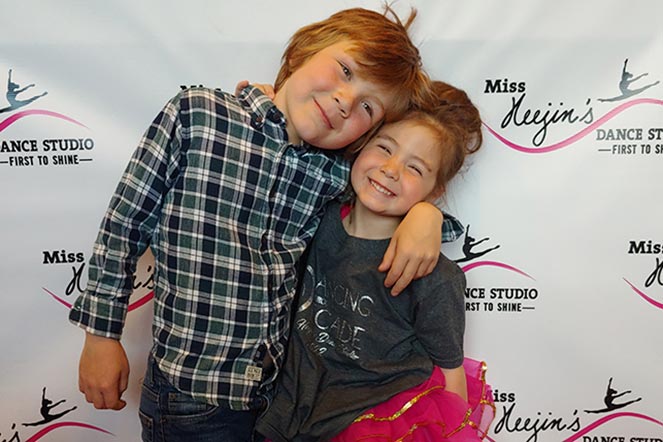 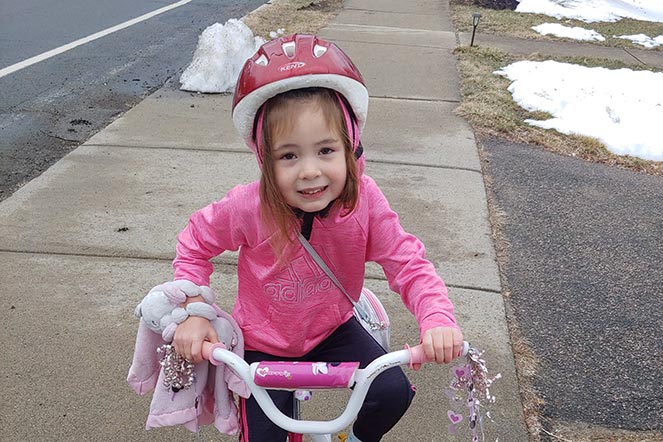 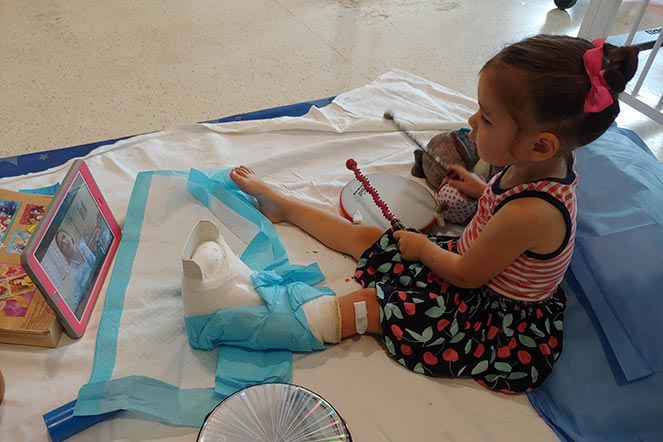 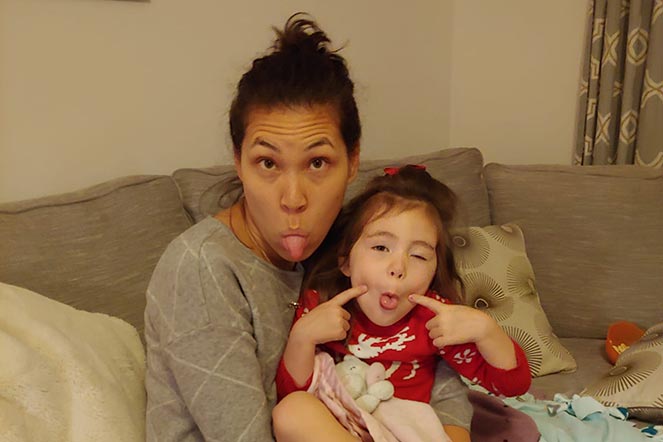 Scarlett and mom having fun. 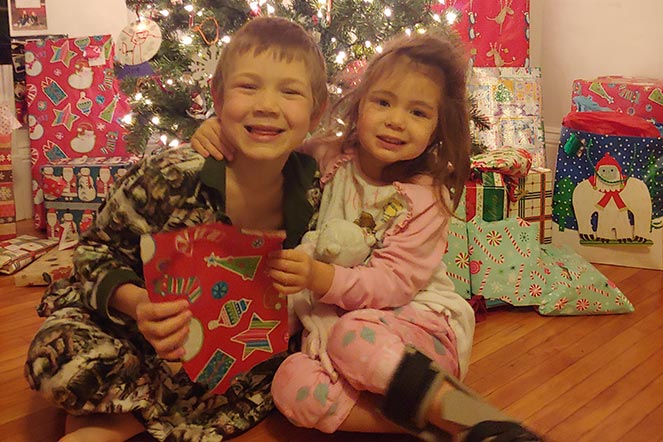 Scarlett and Daniel are all smiles at Christmas.