Chronicle of a Dream Fulfilled

Dennilson is originally from Sahuayo, Michoacan, and he is 14 years old.

He is going to start his third year of high school and his story begins when he was a 2-month-old baby. When his parents admitted him to Shriners Hospitals for Children Mexico, he began to use his prosthesis, which has helped him fulfill his dream of playing soccer.

When he was 6 he joined the school team, and he had the chance to attend various intercollegiate championships. One of those tournaments took place in Piedras Negras, Coahuila, where he won the trophy for the best goalkeeper. He also participated in the interstate Mexico-Guadalajara zone and he continues to be the designated goalkeeper of his school's team.

His biggest dream was to visit the Azteca Stadium and get to know his favorite team, Club America, and we use the past tense because Denny fulfilled his dream!

Dennilson received an invitation via Twitter from Santiago Baños, Sports President of Club America, to attend a game. Dennilson's reaction was endearing, because for him this had been a dream from an early age, and although at first he couldn't believe it, little by little he realized that, indeed, this would happen in just a couple of days!

Denny arrived with his family in Mexico City where he was received by the Club staff. In the afternoon, the adventure began when he was able to visit, not only the great Coloso de Santa Úrsula, but he also had the chance to access the players' dressing rooms where he was able to meet several of them. The Club gave him the official shirt of America with his last name stamped on it and the number 1, and it had also been signed by all the players.

My dream is to play for The America some day and be able to represent Mexico.

After this, Dennilson was able to be at the stadium's big field to watch the players warm up before the game.

Once this moment was over, he walked towards the tunnel where the players come out onto the field. There, he was greeted by Santiago Baños, who talked with him and his family about his visit to the stadium and what their feelings were after meeting the players in flesh and blood.

Later on, Dennilson set out to watch the game with his family from one of the stadium's boxes. He were ready to watch his favorite team play, the team that inspires him to continue playing soccer, and, above all, to see the player he most admires, Memo Ochoa.

The surprises were not over yet, as Club America won by three goals to nil, and Dennilson's emotion was doubled as he was able to be present at the stadium and his team won the game!

However, the excitement would continue, because after the game, Dennilson was able to fulfill one of his biggest dreams. He met his favorite player, Memo Ochoa, who greeted him and gave him the shirt he wore during the match that afternoon; and from that moment onwards I “never wanted to take it off,” Dennilson said.

This experience had a very positive impact on Denny, because now more than ever he has the motivation to continue practicing the sport he likes the most, and follow in the footsteps of those he admires most.

A big thanks to Club America for making Dennilson's dream come true.

For Dennilson it is an Accomplished Dream

Being able to meet his hero motivates Dennilson to continue playing soccer. 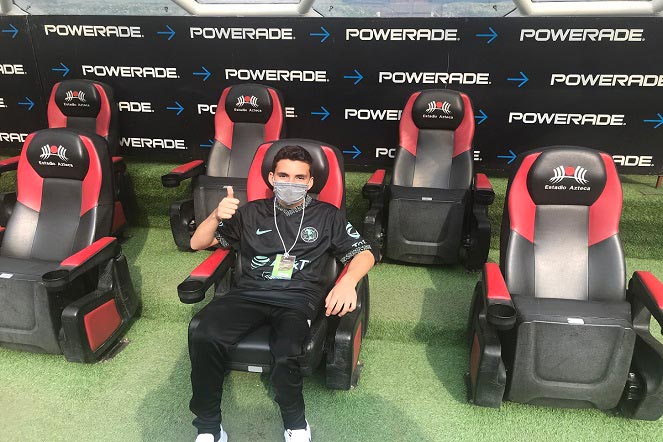 Dennilson on the players' bench. 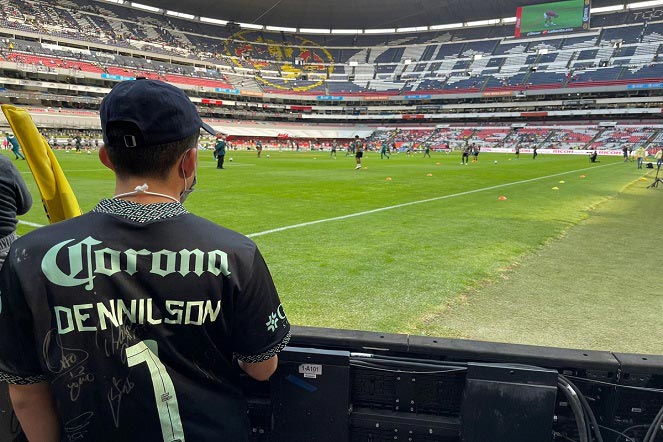 The place he always dreamed of getting to know.