After an accident at the beach, Sawyer received round-the-clock specialized burn care.
Nov 09, 2021

Hot sand caused by a fire pit results in a serious burn injury.

Sawyer came to Shriners Children’s Boston in 2018 when he was 10 years old after sustaining serious burn injuries from walking on hot sand at a Cape Cod beach. Sawyer’s family set up a fire pit in celebration of his grandfather’s 85th birthday. They secured a permit, had plenty of adults on hand to supervise and used a container to prevent hot embers and ashes from hitting the sand. However, once the sun set and the flames were extinguished, it was difficult to tell where the fire pit had been and where very hot sand remained.

Sawyer was in a chair near the extinguished fire pit. When he stood up, barefoot, Sawyer crossed the hot sand and fell to the ground, screaming in pain. Paramedics arrived once the family called 911, and they immediately called a helicopter to fly Sawyer to Boston for specialized burn treatment.

With the soles of his feet badly burned, Sawyer needed painful debridement to remove the damaged skin and frequent dressing changes to promote proper healing. Physical and occupational therapy were also part of his daily care to ensure mobility.

Sawyer stayed in the hospital for two weeks then returned weekly for dressing changes. As his wounds healed, the follow-up appointments became less frequent and eventually ended about a year after the injury.

We love supporting any opportunity that will help ensure all children can get the same care as Sawyer did.

Along with the obvious challenges that come with being hospitalized, Sawyer was homesick and missed his dog, Denver. Child Life Specialist Brooke Allen arranged a visit by one of the hospital’s therapy dogs after a particularly difficult bandage change. Diane said, “This was the most amazing way to lift Sawyer’s spirits, and really brought a smile to his face.”

The week following the accident, Sawyer was supposed to start at a new school. After he left the hospital and was ready to return to the classroom, Brooke facilitated a school re-entry in collaboration with the Harwich and Chatham Fire Departments, as well as members of the Boston Firefighters Burn Foundation.

“Brooke was an amazing help to Sawyer and would jump through hoops to make sure he was comfortable and happy,” Diane said. “Brooke always had a huge smile on her face every time she entered the room, and she always put Sawyer at ease – even through the difficult treatments.”

Back on His Feet with Help from Physical Therapy

An active kid, Sawyer had to sit out the fall golf season, but was back on his feet in November of 2019 to participate in a Spartan Race at Fenway Park as part of Shriners Children’s Team No Limits. After completing the race, Sawyer knew it was just a matter of time before he could get back to all his favorite activities.

One person in particular who helped Sawyer get back to the things he enjoyed doing before his injury was his physical therapist here at Shriners Children’s Boston, Aimee Chiasson. “Her low-key demeanor and ‘think outside the box’ approach was a tremendous help as Sawyer was working to get back on his feet,” Diane said. “She is a very gifted physical therapist that knows how to read children very well!”

Giving Back to the Hospital and the Community

Now in his first year of high school, 14-year-old Sawyer loves studying science. In his free time, he enjoys sailing and traveling.

To help prevent others from sustaining similar burn injuries, Sawyer educates the public by sharing his experience with burn injury, rehabilitation and pain management at paramedic refresher classes on Cape Cod.

Sawyer’s family has also generously continued to support Shriners Children’s Boston through donation and fundraising efforts. Most recently, Sawyer’s family fundraised for our second annual Virtual Haunted Walk, which ran from October 24 to November 1 of 2021.

“We love supporting any opportunity that will help ensure all children can get the same care as Sawyer did,” Diane said.

Sawyer and his family formed long-lasting bonds with some of our staff members throughout his stay and rehabilitation. 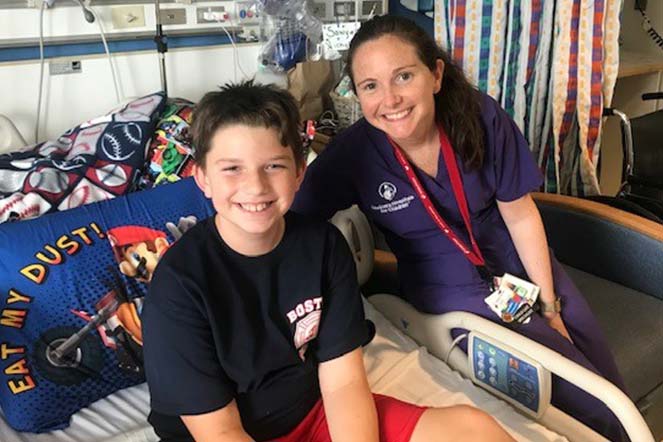 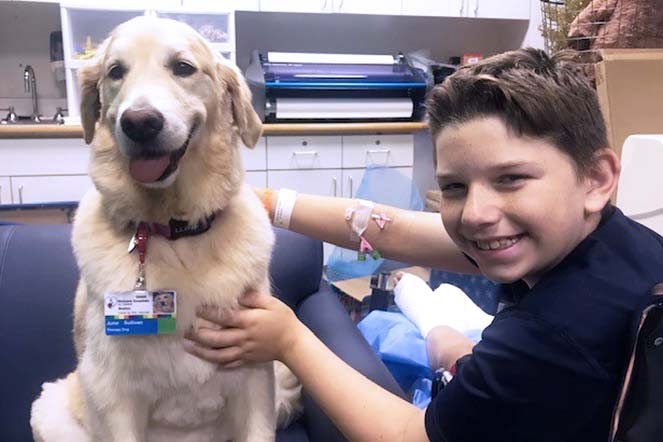 Brooke organized a visit from therapy dog Juno when Sawyer was missing his own dog back home. 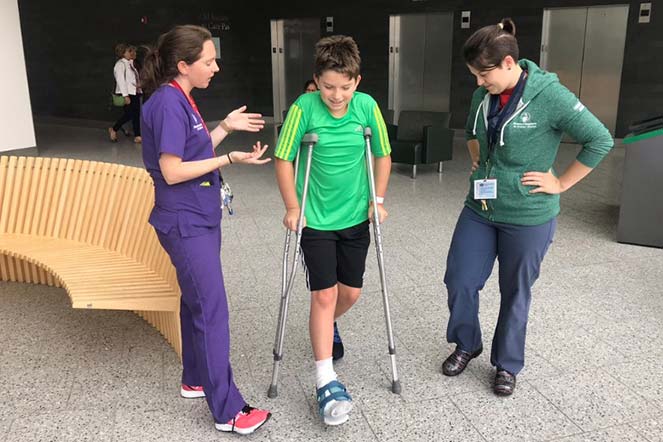 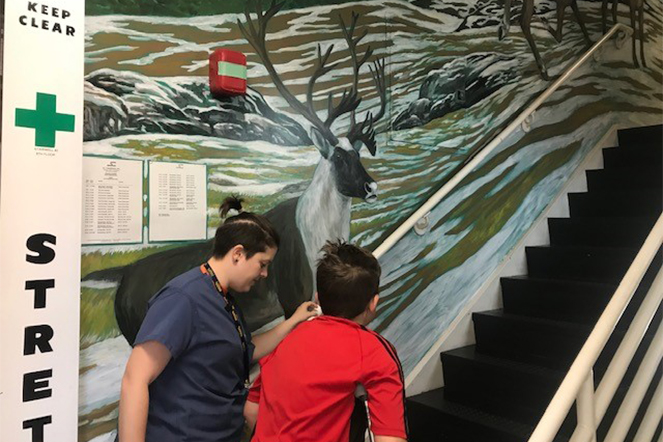 Aimee and Sawyer climbed the stairwell as part of his rehabilitation.