Hunter is a 10-year-old boy with an infectious laugh and big personality despite his small stature. He loves to ride his bike, climb things and rough-house. He especially loves to wrestle with his dad.

“Hunter loves WWE wrestling,” said Hunter’s mother, Amanda. “A lot of pretend wrestling happens at our house, but because of our medical condition, I always have to remind him, ‘You’re breakable, don’t do that!’”

Hunter needs his mother’s reminders because he was born with osteogenesis imperfecta (OI), also known as brittle bone disease. It is a rare genetic disorder that affects bone formation and strength. Children born with OI have bones that break easily and often with little or no obvious cause.

Hunter has been a Shriners Hospitals for Children — Northern California patient since he was a toddler. Hunter is also a second-generation patient at the hospital. His mom, Amanda, was treated for her OI as a child, when the hospital was located in San Francisco. Amanda credits her care with giving her the ability to walk today.

Hunter’s medical journey has been difficult and complex but enabled him to walk, stand up tall and live a robust life. Hunter was born a fighter. He came into this world with 18 broken bones, which is a realistic number to see for newborns with OI. Hunter has been followed closely by doctors his whole life. Over the years he has had six surgeries to correct various issues related to his OI.

Hunter’s first surgeries at Shriners Hospital, led by pediatric orthopaedic surgeon, Jennette (Jenny) Boakes, M.D., were to straighten his legs and hips, giving him the ability to walk. Hunter has had multiple surgeries over the years to heal broken bones.

His care team installed a halo gravity traction device that Hunter wore over several weeks while hospitalized to lengthen his spine and torso. When they were adequately lengthened, Hunter underwent surgery to insert special rods (MAGEC rods) into his spine. The rods will grow as Hunter does and will straighten his spine over time. They will eventually be removed when he is done growing. Hunter’s dad Robert noticed an immediate difference after Hunter’s halo treatment and spine surgery.

“Hunter’s spine had a 130-degree curve before the halo treatment and the surgery,” said Robert. “Today his spine curve is only 50 degrees and will continue to improve. His shoulder blades, once very uneven, are now much more even. The surgery also made him a lot taller.”

According to Robert, Shriners Hospitals for Children — Northern California is almost a second home for Hunter, and the little details make all the difference.

“Hunter is very comfortable at Shriners,” said Robert. “When he’s had to choose between going to the emergency room [for a broken bone] on a weekend or waiting to go to Shriners on Monday, Hunter has always chosen to wait for Shriners. It's like a second home to him, it’s a special place.”

Hunter spent the majority of his down time at the hospital taking advantage of the video game consoles housed in the central activity pavilion – the play center where patients go just to be children and escape clinical settings.

“I beat Super Mario when I was in the hospital!” said Hunter. “I like all the fun things to do at Shriners, even my friends liked visiting me there.”

Hunter’s mom Amanda credits the expertise of the medical team and their depth of experience with osteogenesis imperfecta, in helping Hunter thrive.

“When he was first born he was treated by our local doctors, but when they had trouble getting his broken leg bone to heal I decided to move to Shriners,” said Amanda. “I had a good experience at Shriners and knew that would be the best place for him. They really understand OI and understand kids.”

The medical team at Shriners Hospital will be there for Hunter as he grows.

“I want to play in the NBA,” said Hunter after being asked about his future career goals. Hunter’s mom Amanda tells him it is probably not in his future given his small stature and brittle bones, but she will encourage his second-choice career – a video game tester. 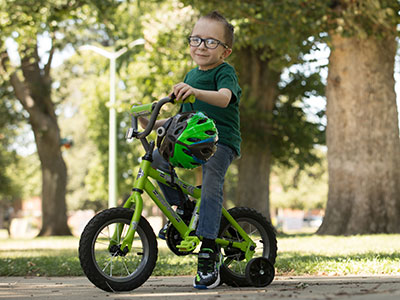 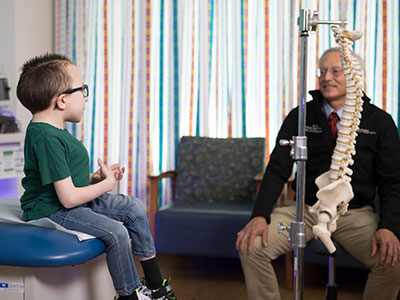