Patient Springs Back After Spine Surgery

As an active gymnast, Madeline underwent a routine physical at practice one day, and the examiner discovered a noticeable curve in her spine and an unevenness in her shoulders and hips. Prior to this discovery, Madeline experienced no outward signs or symptoms of scoliosis, though she does remember having difficulties rolling in a straight line any time she did a somersault on the beam in gymnastics. After learning of the curve, her family went to the Portland Shriners Hospital for scoliosis treatment.

Madeline’s mother, Jennifer, was familiar with scoliosis because her own mother had been diagnosed with the condition as an adolescent. This familiarity made Jennifer especially concerned when her daughter was diagnosed, because she witnessed the long and excruciating recovery process that her mother had gone through 30 years ago.

“Thinking back to what I saw my mom go through when she had her surgery made me really scared for my daughter,” Jennifer said. “I was really scared that she wouldn’t be able to do any of the things that she used to be able to do – but this has been totally different! It amazes me the advancements that have been made in spinal surgery since the 1980s. She [Madeline] is as active and strong as she was before.”

Madeline received treatment from Michelle Welborn, M.D., pediatric orthopaedic physician at the Portland Shriners Hospital, who performed an anterior fusion in March of 2019. Madeline spent four days recovering at the hospital with her mom, where – according to them - there was never a dull moment! Madeline and her mom were able to meet members of the National Guard who visited the hospital during their stay. This was particularly meaningful for Madeline, who hopes to join the Air Force as a cargo pilot one day. Also during her stay at the hospital, Madeline befriended another patient on the unit who was about her age and was going through the exact same thing. On their last day at the hospital, they had a Taylor Swift sing-along together, led by music therapist Keeley.

“This isn’t an experience that we look back on as being negative. That’s not saying that Madeline didn’t have any pain or it wasn’t difficult, but Shriners [Hospital staff] made it enjoyable,” said Jennifer. “We just had an amazing experience at Shriners, and Dr. Welborn has been a fantastic surgeon. I can’t say enough good things about her."

After an eight-month hiatus post-surgery, Madeline was able to return to gymnastics. Now, she is tumbling just as she was before the surgery, performing front tucks and aerials during gymnastics practice, proving that nothing can stop her. 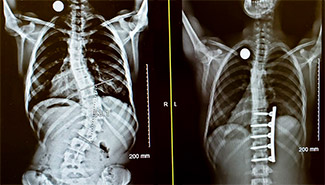 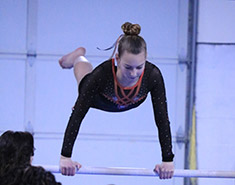