When the COVID-19 pandemic forced the postponement of all non-emergency surgeries in Massachusetts, Boston Shriners Hospital patient Jovani’s mother, Tanya, was concerned. She described how it felt to have her son’s surgery for a cleft lip canceled at the last minute due to the public health crisis.

“My son had already developed a lot. He was starting to walk and he was crawling. When he was supposed to have the surgery at 4 months, Jovani was not doing those things. He was not on the move,” Tanya said. When the state permitted the resumption of non-emergency surgeries, Jovani’s case was the first performed at Shriners Hospitals for Children — Boston. Jovani was 9 months old when he had the surgery.

Being at the hospital for surgery during COVID-19 was difficult. Tanya describes herself as an extrovert. With restrictions on visitors, Tanya found herself alone at night with Jovani while he recovered. “It was hard to have the surgery during COVID because you are confined to your child’s room, the doors are shut, everyone is in full protective equipment, and the dining room was closed. All of the typical hospital sounds were magnified, especially at night,” Tanya shared. “And it was already super emotionally stressful,” she added.

Even though visitors were limited because of the pandemic, Tanya was not on her own in Boston during Jovani’s hospitalization. “My husband, Marvin, and my family were my rocks. They stayed in Boston so they could be close to us and help in any way they could,” she said. They brought meals to Tanya and would take turns staying with Jovani so she could get some rest.

Tanya and her husband discovered that Jovani would be born with a cleft lip when he was in utero. “I didn’t even really know what a cleft was. I’ve never met a person who had a cleft lip in my entire life,” said Tanya. She described having a vivid dream that her baby would have a cleft lip when she was about 16 weeks pregnant. She scheduled an ultrasound and could identify Jovani’s cleft as soon as she saw the images. That discovery was the beginning of a difficult journey because Tanya felt her obstetrician was not effectively addressing the concerns and questions she had. At that point, Tanya began to see a doctor at Massachusetts General Hospital.

Tanya was anxious when, at 32 weeks, her baby was losing weight and not turning in the womb. Tanya was under serious distress, waking up every day worried about losing her baby. At 36 weeks, Tanya had a C-section, delivering a beautiful baby boy. “He was perfect,” she said. Mother and son went home but Jovani was soon losing more weight, having difficulty getting enough nourishment because of his cleft lip.

At that point, the family received referrals to the Boston Shriners Hospital and Dr. Eric Liao, co-director of the Cleft and Craniofacial Center. “I think Dr. Liao and Shriners [Hospitals] are just amazing,” Tanya said.

Staff members gave Jovani a special bottle and also gave Tanya instructions on how to use it. “That was a whole world of change,” she said.

While waiting for Jovani’s surgery to be rescheduled, Tanya connected with a Facebook group for families who have children with a cleft lip. Although non-emergency procedures were postponed in Massachusetts, that was not the case in every state. Tanya learned a lot from other families who were further along in their treatment plan about what to expect with Jovani’s surgery.

Jovani’s care team does not expect that he will require additional surgeries as he grows, but will not know that for sure until he is 4 or 5. As Jovani gets older, medical staff members will also monitor his speech and developmental growth.

Post-surgery, Jovani’s follow-up appointments are being conducted via Fast Track Video Visits. While the telehealth visits have been somewhat challenging, Tanya noted, “You can’t just walk into a doctor’s office and say – hey look at this please.” The family is learning a lot through the telehealth visits, including learning how to feed Jovani with the specialized bottles.

Tanya is grateful for the care Jovani received at the Boston Shriners Hospital. “Dr. Liao is awesome, super-easy to talk to and takes his job very seriously. If anyone needs a doctor for a cleft lip, he is the one. He answered all my questions,” she said.

Tanya also wants to be a resource to other families. “Anything I can do to help any mom going through this, especially to raise awareness and share my experience.” 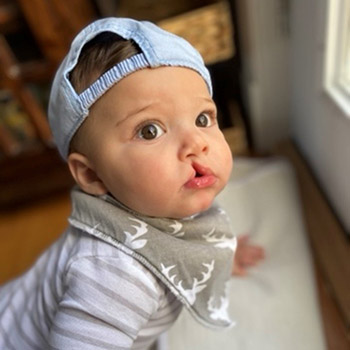 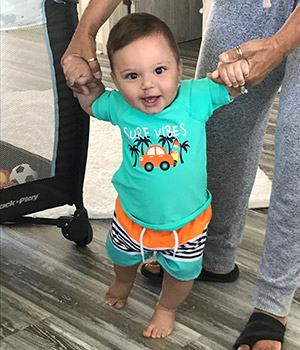