The café at Shriners Hospitals for Children ­— Chicago has a new name to honor a beloved employee. Carmelo Flores, 51, worked for years as the daily dishwasher and a hospital nutrition services team member. He was known for his friendly manner and personal greetings offered to employees. But in May 2020, Flores passed away suddenly The pediatric specialty hospital staff members were shocked and heartbroken at the loss of such a kind, dedicated co-worker. The dining destination was officially renamed Carmelo’s Café at a socially-distanced ceremony.

After Carmelo’s passing, dozens of co-workers signed a large photo poster and contributed written cards with memories of Carmelo for his family. But the staff wanted to do more for their beloved co-worker. “Members of our staff actually suggested renaming the Skyline Café after Carmelo. We took it to our hospital Board of Governors who unanimously supported the change,” Mark Niederpruem, hospital administrator, said.

At the dedication ceremony, many hospital staff members attended to see the unveiling of the café’s new name. “This is a very special moment in the life cycle of our hospital,” Niederpruem said to attendees. “Carmelo was really a part of the fabric of this place for many years.”

Pamela Patt, MS, RDN, CSP, LD, CNSC, director of nutrition services, worked with Carmelo the entire 30 years he worked at the hospital. She recalled his gift for remembering names and birthdays. “He knew everyone’s birthday and everybody’s name. People who had been pregnant while working here, he knew their children’s birthdays. And I thought it was just me because I worked with him in the kitchen. But no. I had nurses come up to me and say ‘He knew my children’s birthdays.’ He would always say ‘Suzie’s birthday is coming up. Make sure that you tell them happy birthday.’” Patt said she has also heard from many patient families who mourn his passing and remember Carmelo with his friendly smile and greetings when they returned dishes to the café.

Carmelo’s sister Norma, his mom, Maria, and his aunt attended the unveiling. The family was limited in the number of relatives who could be in-person because of COVID-19 precautions, so Norma broadcast the event live on Facebook. “My brother was my best friend…You guys were not only his co-workers, you were his family,” Norma said at the event. “Trust me, I feel like I know a lot of you. He tells me ‘so and so had a baby.’ I told him I don’t know who these people are, but that’s cool.”

She shared the family’s overwhelming gratitude for this gesture and the support they received after Carmelo’s death. “You all should be proud of yourselves working like that, as a group, as a family. Many places cannot say that they are a family. But to literally say it, for my brother, this was a second family.”

Norma said she looks forward, when COVID-19 is over, to bringing her grandkids to Carmelo’s Café, because this is now a part of him. “Because he is the best uncle in the world, according to them, because he let them do anything they wanted.”

The newly-named Carmelo's Cafe is located next to the Patient Activity Mall in the hospital's lower level. 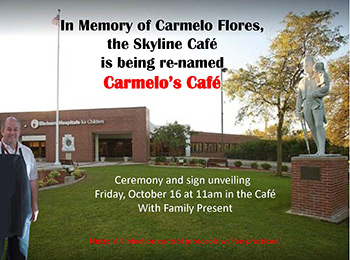 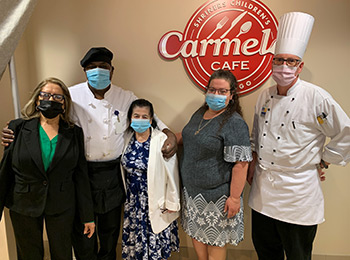 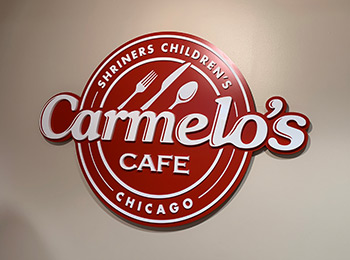