Every summer since 1947, the “Best of the Best” in Montana high school football have come together to play in the Montana East-West All-star Football Shrine Game to support Shriners Hospitals for Children — Spokane.

Three Shriners Temples (Chapters) from Montana, including Algeria in Helena, Bagdad in Butte, and Al Bedoo in Billings, work together to organize this amazing event to support the Spokane Shriners Hospital. All told, the game has raised more than $1,000,000 for Shriners Hospitals for Children — Spokane over the years.

This year, the game was scheduled for July 18 and would bring in players from across Montana. Then the COVID-19 pandemic swept the globe and the executive board of the Montana East-West Shrine Game made the difficult decision to call off the 2020 game.

Montana East-West Shrine Game player Tommy, of Butte, knew he wanted to do something when he discovered that the game was off. “It is kind of a last hoo-rah,” Tommy said, “before we split apart and go our separate ways. That is kind of how it was for us, the football players, both Butte High and Butte Central. The Shrine game was supposed to be an opportunity for us to be together and build relationships before we split apart.”

Tommy and members of the Butte High Bulldogs and the Butte Central Maroons, as well as two Butte High cheerleaders, collaborated to create an event to replace the football game. Those players included Aaron, Thomas, Guido and Trevor of Butte Central; and Scout, Konor, Lucas, Quinn and brothers Kameron and Kobe of Butte High, together with cheerleaders Larissa and Madi.

The boys decided they needed to find a way to bring the community together during these difficult times. Along with the help of their parents and volunteers, they organized a cornhole tournament to support the Spokane Shriners Hospital.

“Looking at the last couple months,” Tommy said, “everyone’s been sitting at home, isolating from everyone else and following the protocols, and there’s a reason why people are out here. There is a reason why they are here, wearing their masks and being careful and social distancing, but it is just energizing to see everyone out here. It’s exciting to be a part of something where there’s a community together, it’s not just being separate from everyone.”

Nearly $55,000 was raised between tournament team fees, sponsorships, outside donations and a silent auction, with donations still coming in. Two of the largest donations were made through matching gift commitments of up to $10,000 from the Dennis & Phyllis Washington Foundation and up to $6,000 from Town Pump in Butte. Additional sponsorships donating in the thousands included Jim and Chloe Gillman Foundation, Jordan Contracting, CCCS and Pioneer Concrete, as well as over $1,000 from Northwestern Energy in support of employees volunteering at the event.

“You can’t beat this,” said Butte Central Maroons' Scout. “Butte’s a great community and we’re coming together to raise money for the Shriners Hospital for Children, which we weren’t able to do for football. We got together and it has been a great turnout. Butte has our backs, for sure.”

The event followed the health and safety guidelines put in place by Montana Gov. Steve Bullock. Participants wore masks and the volunteers sanitized game boards after each round.

“It was unfortunate that the game got canceled, but at the end of the day that was an insignificant loss,” said Tommy. “Many other people are facing problems that are much more serious, and we are just proud we can say we did something to help them.” 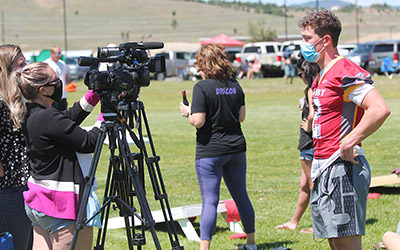 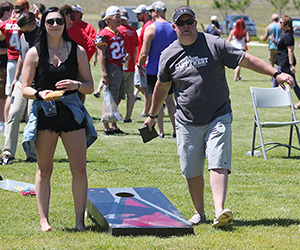