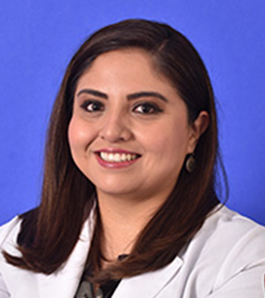 Zazhil Herrera-Caballero, M.D., got the chance to experience Shriners Children's when she was a medical student. There, she became interested in orthopedics, and then returned as an orthopedic resident and found that working for children, especially in the field of orthopedics, she can really make a difference in the quality of their lives and their function.

Now, being a part of the medical staff, Dr. Herrera-Caballero realizes that this is where she belongs. She's heard that if you choose a job that you love, you don't have to work a single day.

She thinks that children are extremely intelligent, so she decided to treat them accordingly. She has seen that if you tell children the truth about their treatments, and explain it to them and their families, the medic-patient relationship will be great.

Dr. Herrera-Caballero was born and raised in Mexico City. She studied medicine at Universidad La Salle, from 2005 to 2010. She completed her residency in trauma and orthopedics at Universidad La Salle in Sanatorio Durango. In 2016, she went to Shriners Children's for her 5th year as a pediatric orthopedic surgeon in training. She was also a chief resident in 2017. She began to work as a staff member in 2019, and is now in the hip clinic and cerebral palsy clinic.

She likes to teach, and thinks we all have the obligation educate the next generation of doctors. In Mexico City, we have the opportunity to receive orthopedic residents from all over the country, and even from other countries. Dr. Herrera-Caballero believes if we teach them well, they'll be able to provide quality treatment whenever and wherever they're needed.

Dr. Herrera-Caballero also worked as secretary of the Orthopedic Resident Chapter at Mexican Orthopedics College, and she is still a member in the Mexican Pediatric Orthopedics Society.