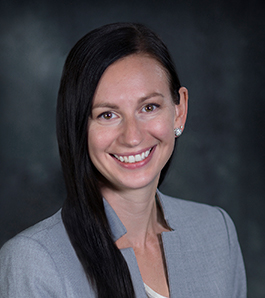 Kelsey Davidson, M.D.'s interest in orthopedics and caring for children with musculoskeletal conditions stems from multiple sources, but her family played a large role. Her mother was a pediatric physical therapist, and as a young girl, she would often watch her work with young children with developmental disabilities. When she was older, one of her first jobs was a respite care provider. Here, she spent time playing with and observing how children with disabilities interacted with others and the world. In addition, she grew up with a younger brother with Down syndrome. She learned to give him extra time to accomplish tasks, but to never underestimate his determination and ability. Both of them were involved in Special Olympics, him as an athlete and her as a figure skating coach and unified bocce partners. She loved working with the athletes and helping them find ways to succeed. This is one of the things she loves about her job -- working with children and their families to help them achieve their full potential.

Dr. Davidson also has an interest in pediatric sports medicine. She competed in figure skating all through school and college. She was fortunate enough to make it to Nationals one year, and later skate professionally with the show Holiday on Ice. Even though she was never an Olympic hopeful, skating offered much joy and a sense of accomplishment. She wants to help other children find that same joy and accomplishment in their own sport of choice, even if it's playing ball with their friends in the backyard.

Dr. Davidson's first job as a physician after training was at Shriners Children's Chicago. She is very happy to be part of the team here. In her free time, she enjoys reading, dancing, walking with her dog, Denali, and exploring the many restaurants in Chicago.

Pediatric specialty care for children throughout Illinois and beyond