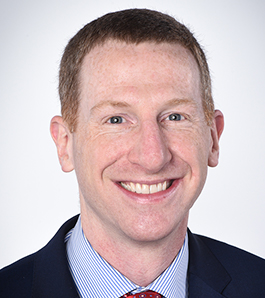 Joshua Pahys, M.D., was born and raised in Cleveland, Ohio. He was inspired to go into medicine by his grandmother, who was one of only two females in her graduating medical school class in 1944. She was a pediatrician for three generations of children in her hometown and did not retire until she was 78.

Dr. Pahys was first drawn to the field of orthopedics through his own experiences as a patient. He was diagnosed with scoliosis and wore a back brace as a teenager, similar to what he prescribes for his patients today. Dr. Pahys also underwent spine surgery to remove a small tumor in his lower back. The surgeon and his team helped him quickly get back on his feet and start his college basketball career at Johns Hopkins University only a few months later. He then moved to Philadelphia for medical school and residency in orthopedic surgery and has remained here ever since.

Dr. Pahys says it has been an incredible honor to be a part of Shriners Children's. It has afforded him the privilege to care for patients locally and from across the globe, with problems both big and small, regardless of their background. Dr. Pahys has used his own past personal experiences to help his patients and families navigate the challenges they are facing today. Dr. Pahys has also enjoyed closely collaborating with other centers including Erie, Pennsylvania and Greenville, South Carolina to help provide the most comprehensive care to patients.

Dr. Pahys spends his free time hiking the national parks with his wife, three kids, and Stella their great dane.