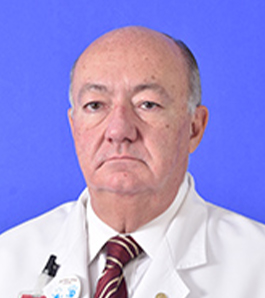 Since he was a child, Felipe Haces-García, M.D., had an admiration for doctors and medical personnel. After his high school years, he was around doctors and frequently visited the hospital because his mother had some medical complications, which meant he got to see their work up close.

It was around this time that he started to take an interest in medicine and took a pre-medicine course which confirmed that he wanted to be a doctor.

While studying medicine at university, Dr. Haces-García rotated on different specialties and was considering becoming either a pediatric surgeon or orthopedic surgeon. He landed on orthopedics because he found its reconstructive specialty more interesting. He was a resident at Shriners Children's Mexico throughout most of his training and had the opportunity to learn about the Shriners Children's mission and vision as well as how we can work to improve the children's quality of life. He believes he made the right choice and has worked at Shriners Children's for 33 years.

He has been married to his wife, Estrella, for 32 years and they have two sons; Felipe Jr. and Santiago.

When he's not at work, Dr. Haces-García likes to play golf and collect caps.