Juan Diego is Back in the House

He brings strength and positivity wherever he goes
Nov 19, 2021

There was a buzz of excitement in the air. The news traveled quickly, bringing smiles from the clinic to the lobby and everywhere in between. “Did you hear Juan Diego will be back in Boston next week?” The happy refrain echoed through the halls.

Juan Diego first came to Shriners Children’s Boston in 2018 with severe burn injuries to his hands sustained from an electrical accident in his home country of Honduras. Throughout his long stay in the hospital, Juan Diego never lost his positive attitude. He embraced every opportunity to be involved, and was an active member of Team Brave, our community reintegration program that enabled him to build his skills and confidence and make new friends.

Sometimes called “the Mayor,” Juan Diego is a beacon of positivity and hope. He is the first person to say yes when asked to help support the hospital. You may have seen his uplifting videos on our social media channels, promoting the Shriners Children’s Boston Virtual Haunted Walk and encouraging other patients to stay strong during the height of the pandemic. So when word got around that Juan Diego was returning to the hospital, people were excited.

We sat down with Juan Diego and his mom, Jackie, to find out what he has been up to since returning to Honduras. He has certainly been busy! Juan Diego graduated from school in June at the age of 16 and has already started college classes studying international relations. He is in the process of applying to colleges in the United States.

“I have learned from working hard through my recovery that I am always ready for a challenge,” said Juan Diego. “A career in international relations will allow me to help people in my country and put into action all of the gratitude I have for Shriners [Children’s] and those who have helped me since my injury.”

I have learned from working hard through my recovery that I am always ready for a challenge. 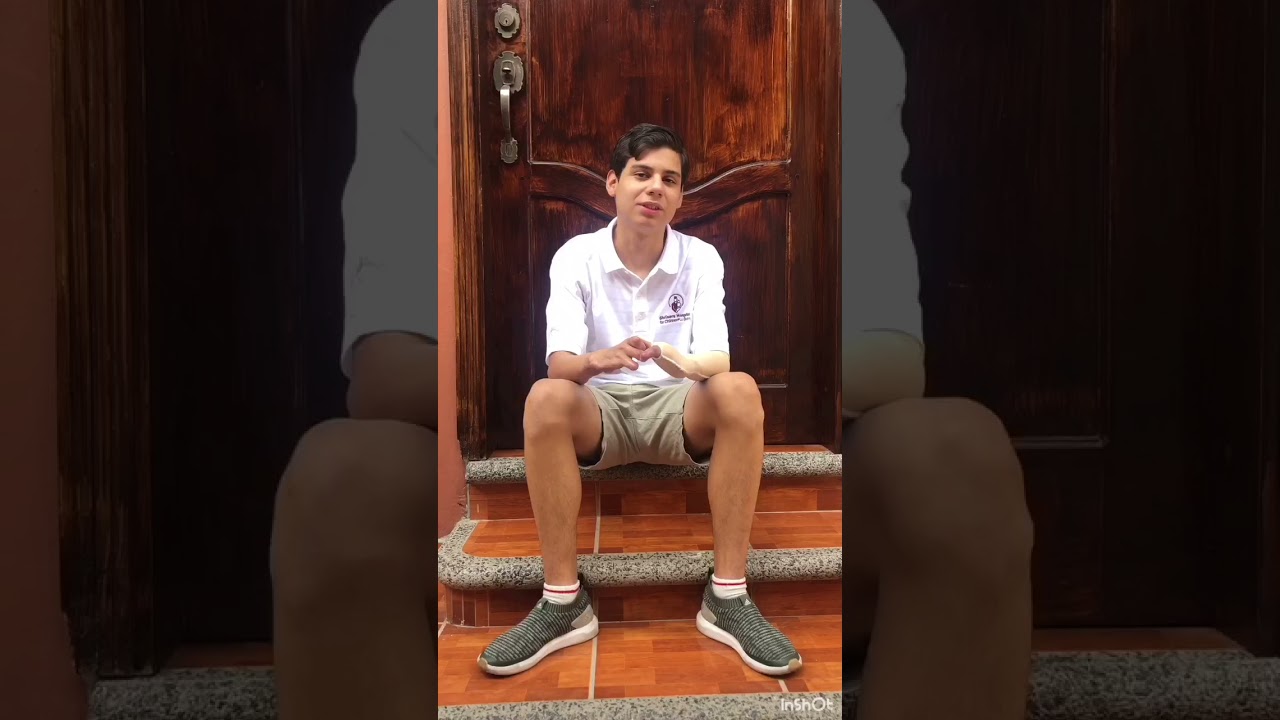 Shriners Children's Boston patient ambassador Juan Diego shared a message of hope and strength at the height of the pandemic.
View Transcript

Hello everybody. My name is Juan Diego and I'm a patient at Boston Shriners Hospital. Today I'm going to tell you about a really difficult situation we're going through right now. And this is the coronavirus. First of all, I want to talk to the staff members. Look, each one of you made the Shriners Hospital a really wonderful place, changing every single life of every single kid who enters there. And I know that every single one of you will show out their amazing qualities of faith, hope, trustworthiness and positivity to overcome this difficult situation and protect every one of the patients. [inaudible] let's keep strong because every good thing in lives comes with patience, faith, positivity and hope. Let's keep fighting and overcome this adversity and always remember, stay safe at home and wash your hands. Sincerely, your friend, Juan Diego.

Juan Diego and Jackie were excited to come back to Shriners Children’s Boston. When they walked through the doors, it did not seem to them like it had been two years since they were last here. They have connected with many staff members, but Juan Diego says that his relationship with Occupational Therapist Courtney Condon is truly special. “She’s my therapist and has always been there for me. She teaches me hard work and discipline and showed me a long time ago not to be a victim. I owe a lot to Courtney for helping me learn I can do anything I put my mind to.”

Juan Diego has also formed special friendships with other patients. Valentina, who recently “graduated” from Shriners Children's, and Juan Diego have been special friends since the beginning, he said. Even their moms have become best friends. It’s like that for many families, forging friendships and supporting each other during long hospital stays. Another such friendship is with Samantha who is almost 5 years old. They first met in 2018, and when he met her grandmother recently she said, “Oh you’re the famous Juan Diego!” To watch the two laugh and giggle and see how Juan Diego serves as a role model to Samantha is incredibly heartwarming.

When asked how he stays positive, Juan Diego shared that he puts his faith in God and knows he has to do his part as well. His mother, Jackie, said, “Three years ago the doctors didn’t think that Juan Diego would be able to do all the things for himself but now he is independent. Going through such adversity has helped my son develop strength and a positive outlook. He has the spirit to have an education and to help others.”

Both Juan Diego and Jackie describe Shriners Children’s Boston as a second family, and they could not be more grateful for the life-changing care. He gives a special shout out to his doctors, Joseph Upton, M.D., and Branko Bojovic, M.D., who are using laser and plastic surgery to improve the function and appearance of his hands.

Dr. Upton has been a plastic surgeon hand specialist at Shriners Children’s Boston for 45 years. He has extensive specialty training in orthopedics, vascular surgery and plastics, and was one of the first micro-surgeons in Boston in the late 1970s. He was also the Chief of the Hand Service at Brigham and Women's Hospital and Beth Israel Deaconess Medical Center.

Describing plastic surgeons as thinkers, planners and technicians, Dr. Upton is dedicated to helping address complex pediatric problems, and improving the growth, development and long-term outcomes for his patients.

“When Juan Diego came to us after his electrical injury, he had no function in his hands whatsoever and was using his hands like chopsticks. We have been able to restore sensation and mobility by taking tissue from another part of Juan Diego’s body and building a web space between his thumb and index finger,” he said. “Juan Diego is a great kid and I am so glad that over time, we have been able to improve the position, stability and sensation of his other fingers, as well as the mobility of the joints.”

With every improvement, Juan Diego is able to do more of what he loves. From art and music to so many sports – soccer, football, tennis and ping-pong, Juan Diego keeps very busy. He would even love to go to the Paralympics to compete in ping-pong someday. “I should probably start practicing!” he laughed.

And speaking of being busy, as our conversation came to a close, Juan Diego said he had to get going. After all, he agreed to create the artwork for the hospital’s holiday card and it’s getting to be that time!

Thank you Juan Diego, for all you do to bring light to Shriners Children’s Boston.

Whether he is working with his therapist, getting ready for surgery or having fun with other patients, Juan Diego can always be seen sporting his signature smile. 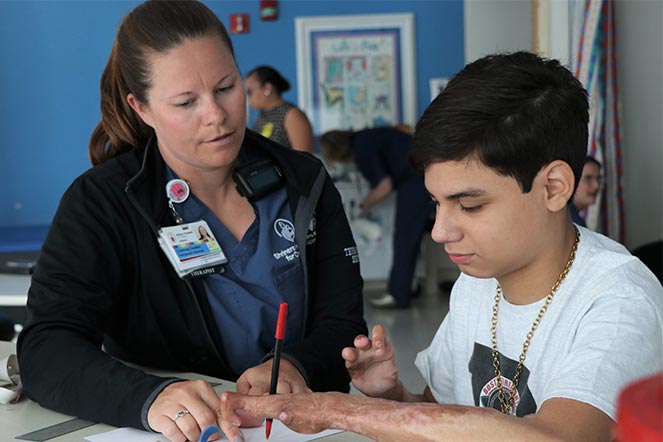 Juan Diego has formed a special bond with occupational therapist Courtney Condon who helps him maximize the function and mobility of his hands. 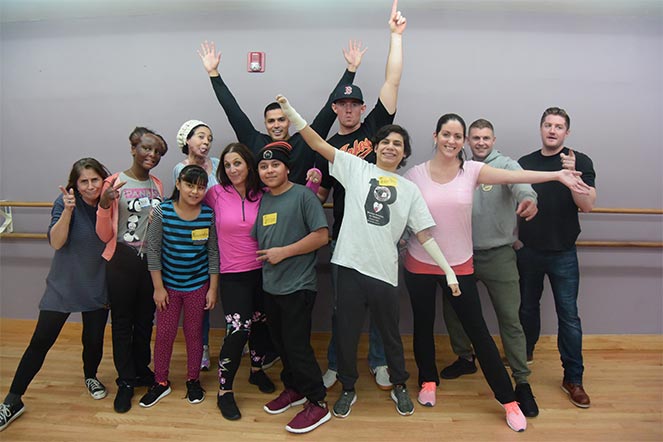 When Juan Diego first came to Shriners Children’s Boston in 2018 he was quick to join Team Brave, the hospital’s community reintegration program. 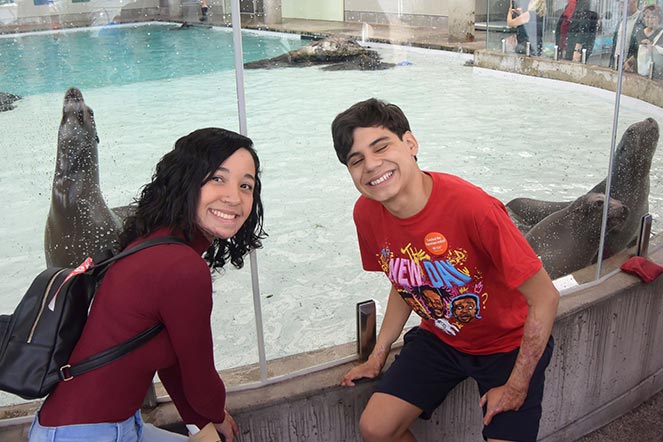 Juan Diego and Valentina have been friends “since the beginning.” 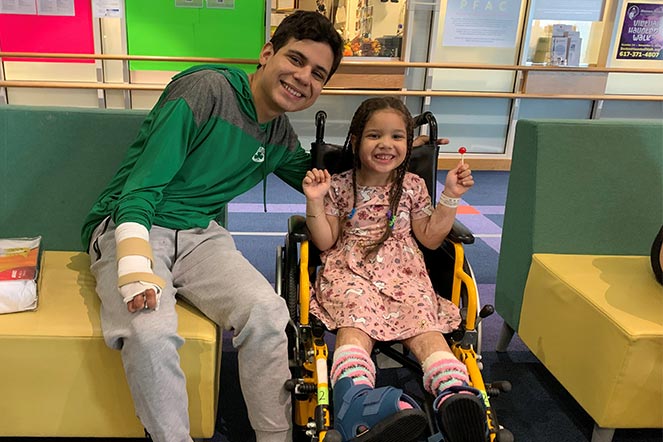 It’s all smiles when Juan Diego and Samantha are together! 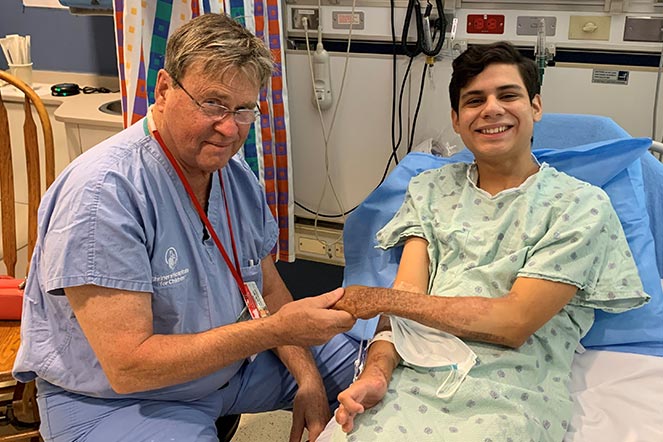 Dr. Upton consults with Juan Diego before his recent surgery to expand the web space on his hand. 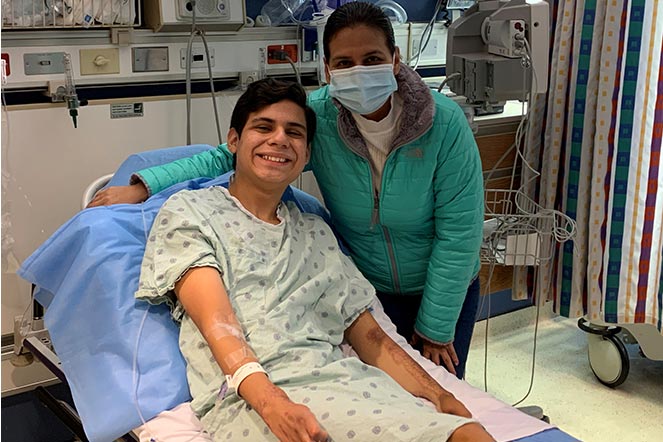