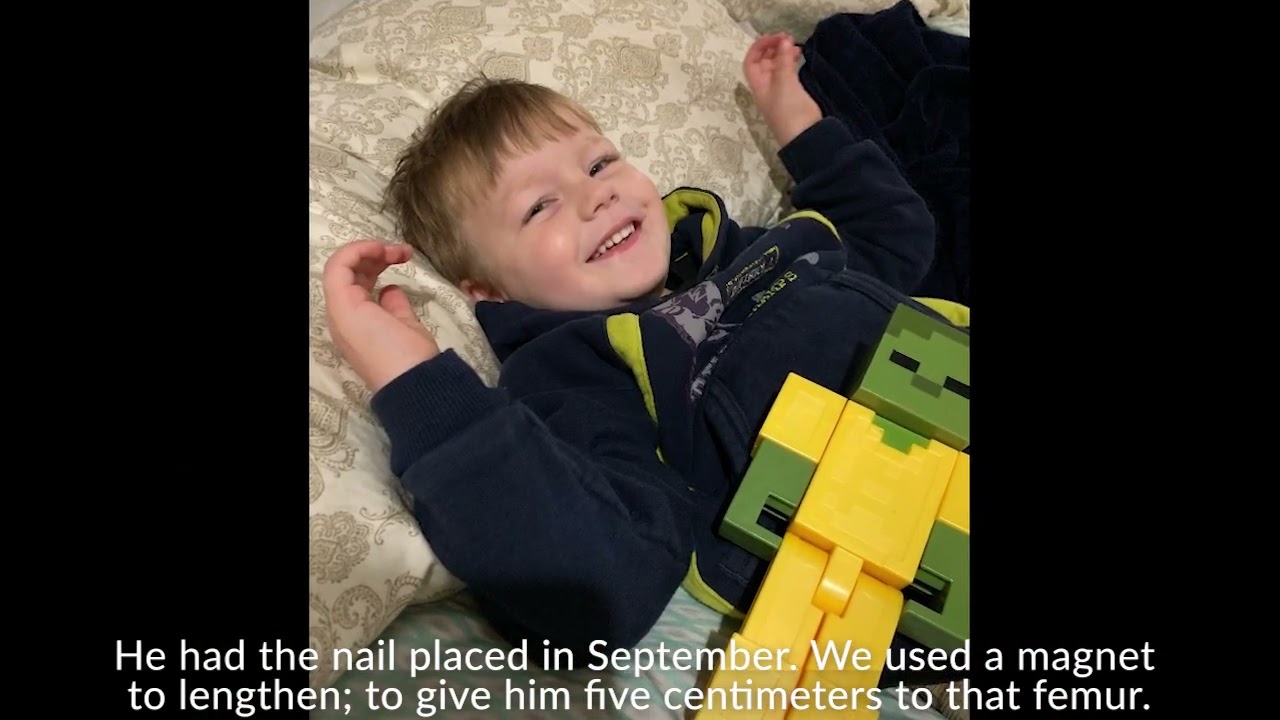 By the time Emmett's sixth birthday rolled around, his parents knew the pain was too much. He couldn't run or play like he desired. So, they returned to Shriners Children's St. Louis for his first of, what likely will be three, leg lengthening treatments.
View Transcript

Speaker 2: Unfortunately, he's only six at this point. So when we did this, we like to go ahead and put a rod down through the center of the bone, through here and do a lengthening through that (bottom third graphic: logo, title reads "Dr. Eric Gordon, Orthopedic Surgeon, Shriners Children's St. Louis). But eight is the youngest child that you can do with one of those rods. So we had to use a different technique. What we did is a technique where we put the rod outside the bone here, but underneath the cast. And what we've done is we've put it down outside the bone. We've looped some wire around here and put a screw through the rod up here to hold it against the bone up here. And then down here, we put a screw through the bone here and then two screws around the rod to hold it in place on the lower part.

Speaker 1: Had the nail placed in September. We used a magnet to lengthen, to give him five centimeters to that femur. And that finished in October. It's going to stay in until the bone fills back in where that was separated. And then the screws, like the one that switched today is holding that nail to his femur.

Speaker 2: And you can see a gap in here that's starting to form bone in this area and that's the new bone that's forming as we're lengthening this bone. Well, the alternative is to lengthen the kids with an external fixator. And especially for the thigh bone, nobody really likes having an external fixator on. They're uncomfortable for the kids. They're very awkward to get around (bottom third graphic: logo, title reads "Dr. Eric Gordon, Orthopedic Surgeon, Shriners Children's St. Louis). It's a real struggle, so for a lot of the kids who are in this situation that normally we might have used an external fixator in the past, we can use this technique with a rod down the side, and then we're planning on using it more.

Speaker 1: He can walk flat-footed at times. It's strange that his shoes are [inaudible 00:02:00], they're all too high now. They have to be shortened. And after the surgery, he was non-weight-bearing and in a wheelchair, but now he's in a walker and he just goes.