Telehealth connects Jokubas with his care team thousands of miles away.
Jan 24, 2023

Jokubas lives nearly 5,000 miles away from Missouri in the Eastern European country of Lithuania. However, as unlikely as it might sound, his orthopedic team is right in the heart of St. Louis, at the Shriners Children’s hospital.

The reason is simple: His parents wanted the best for Jokubas.

Let’s start at the beginning – on the day Jokubas was born.

“We didn't know about Jokubas’ diagnosis until his birth. By that time, it was a huge surprise. We had a lot of tears and stress, but maybe it was better for him as his mom wasn't stressed during the pregnancy,” explained his father, Rimvydas.

Jokubas has proximal femoral focal deficiency (PFFD), a condition that caused him to be born without a thighbone.

Coming to understand that the medical professionals in his home country wouldn’t be able to treat Jokubas’ leg, Rimvydas took matters into his own hands.

“I remember one surgeon told me that there was a similar case with surgery in Lithuania 20 years ago, with the assistance from doctors who worked at a U.S. Shriners hospital. This was the first time I heard about Shriners Hospitals,” said Rimvydas.

That initial internet hunt for a diagnosis eventually led this dedicated father to World Pediatric Project (WPP). As they have with so many children, WPP connected this family with the medical team at Shriners Children’s St. Louis, specifically the Center for Advanced Pediatric Limb Reconstruction and Lengthening, and pediatric orthopedic surgeon Eric Gordon, M.D.

Using the power of technology through telehealth allows the talents of Shriners Children’s teams to deliver care without boundaries and brings healing where it was not previously possible.

Jokubas’ father described that first telehealth visit with Gordon as “the sun after a storm.”

“He explained to us the case. He talked about possible treatments, even showed already grown patients like Jokubas, who were playing basketball and jogging,” he remembered.

“Using the power of technology through telehealth allows the talents of Shriners Children’s teams to deliver care without boundaries and brings healing where it was not previously possible,” explained Chris Kitchen, corporate clinical telehealth coordinator. “As we see the smiles of the patients and hear the gratitude of the families, we know telehealth allows delivery of high-quality care with outstanding outcomes.”

"Although children with severe PFFD cannot be successfully lengthened, the rotationplasty technique allows prosthetic function with an ability to do activities like bike riding that would not otherwise be possible," explained Gordon. "Our goal with these children with severe limb deficiencies is always to treat them in such a way that they are able to do as many of the activities that other children are able to do, and to live as close to a normal childhood as possible."

Meeting with Gordon was very encouraging to a set of parents who had spent many months worrying. The team at Shriners Children’s set out a treatment plan for Jokubas that included a prosthetic leg, periodic telehealth appointments, an initial visit to St. Louis for an in-person evaluation and a return to the hospital after Jokubas turns 4 years old for surgery.

"The rotationplasty procedure addresses several problems that children with severe PFFD have. The unstable hip is stabilized by fusing the highest part of the femur to the pelvis. When doing this, the femur is turned backwards so that the knee functions as a hip, allowing a more normal gait. The foot is turned with the femur so that it turns backwards as well, which sounds strange," explained Gordon.

"With the leg being shorter on this side, however, when the foot is turned backwards, the ankle can work as a knee allowing active motion at the level of the knee. This allows improved function and the ability to do more things when combined with a specialized prosthesis," he continued.

After surgery, a prosthetic will allow Jokubas’ ankle to operate like a knee, offering a more functional long-term use of his prosthetic leg.

“We are very happy and thankful to God that we were lucky to meet such a great organization, that is helping Jokubas to live a valuable life,” his father said.

Jokubas' diagnosis doesn't stand in the way of him having fun. 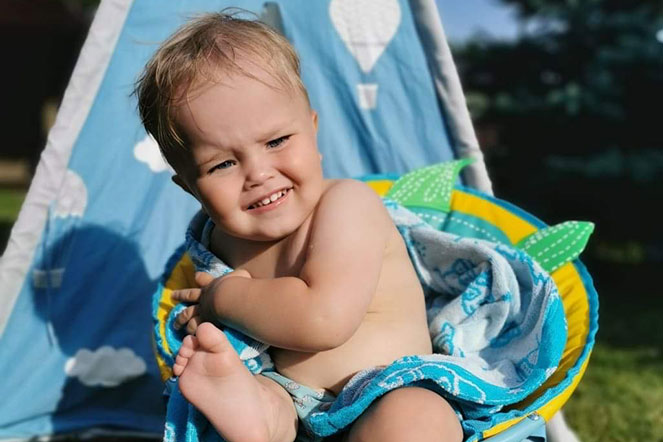 Jokubas smiles for the camera 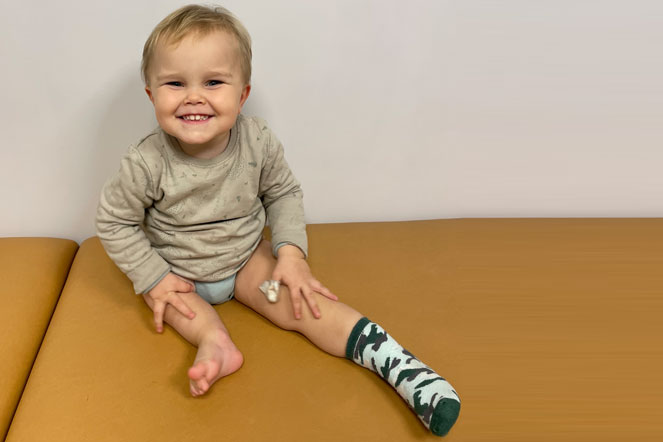 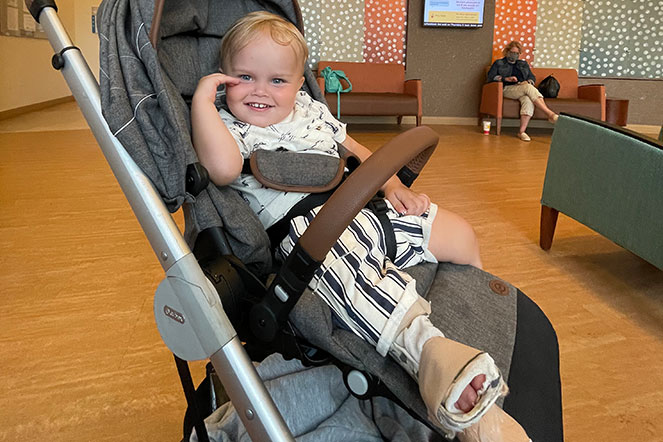 Jokubas shows off his prosthetic 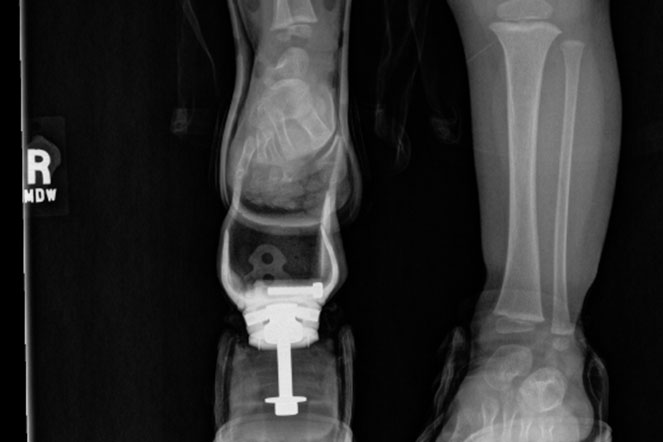 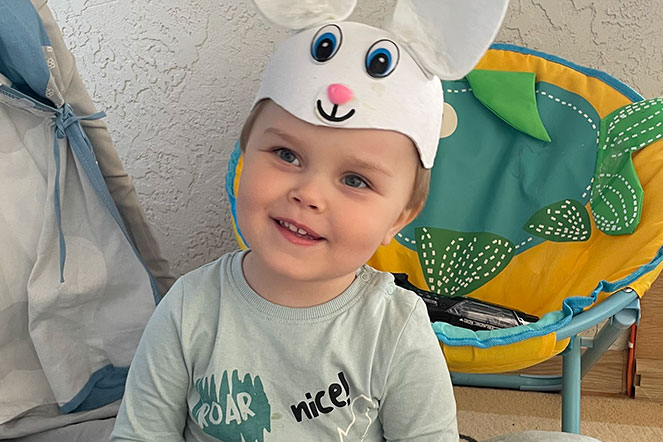 Jokubas is a little boy who knows how to have fun