Nine-year-old Cadence was enjoying a spring evening with her family at their home in upstate New York when a terrible accident occurred around their fire pit. As she and her three sisters were roasting marshmallows, there was a sudden explosion that severely injured Cadence.

While her 8-year-old sister Madison and 4-year-old sister Aria suffered minor injuries, Cadence sustained third and fourth degree burns over 50% of her body. Her twin sister, Kennedy, was not hurt. After being transferred to two different hospitals, the prognosis was grim. Cadence’s family was told she might not make it through the night.

With her family by her side, Cadence pulled through. Friends and family contacted her mom, Angie, about the possibility of seeking treatment at Shriners Children’s Boston. “What we heard from just a few stories sounded so amazing,” Angie said. “We spoke to Dr. Robert Sheridan in Boston and knew it was the right move for us.”

As Cadence’s care was transitioned to Shriners Children’s, Angie was grateful for the support they received before even arriving at the hospital. “Liza, our social worker, walked me through the process for transfer and took care of everything she could,” she recalled.

Cadence had two skin graft surgeries and was an inpatient for a month. During that time she formed special bonds with members of her care team. “Nurse Shannon, Nurse Sam and Nurse Rich were just a few of the many amazing staff that cared for Cadence,” said Angie. “Rebecca from child life gave her a trusting friendship when she needed it the most.”

As Cadence’s recovery progressed, she worked hard to overcome the obstacles that remained. “Jessica from physical therapy gave Cadence the hope of being able to walk, feed herself, and play the violin again, which she achieved with the encouragement and persistence of the entire staff,” said Angie. “Every time she reached a new milestone, the whole floor would come in throughout the day and congratulate her.”

We are so thankful to be a part of the Shriners family. They helped guide us through the darkest time in our lives, and it felt like they held our hand as we navigated Cadence's treatment and recovery journey.

After Cadence returned home, she wanted to do something to help other patients at Shriners Children’s. During her hospital stay, Child Life Specialist Rebecca had recommended a piano key app for her tablet that helped stimulate finger movement. “Cadence remembered how happy she was to finally "play" on her tablet and have some movement in her fingers,” said Angie. “She came up with the idea of donating tablets because she thought it would bring joy to other children, and her sister Madison said she wanted to do the same.”

Along with her three sisters, Cadence had a lemonade stand fundraiser over the summer. At a July visit, both Cadence and Madison presented a donation of Fire 7 tablets to Shriners Children’s Boston.

This fall Cadence is focused on returning to her favorite activities, including cheerleading, gymnastics and playing the violin. A very active and outgoing fifth grader, she also enjoys school, reading, and playing with her sisters.

Cadence will be back at Shriners Children’s Boston every few months for scar treatment and possible future surgeries. “We are so thankful to be a part of the Shriners family,” said Angie. “They helped guide us through the darkest time in our lives, and it felt like they held our hand as we navigated Cadence's treatment and recovery journey.”

She is back to school and enjoying her favorite activities. 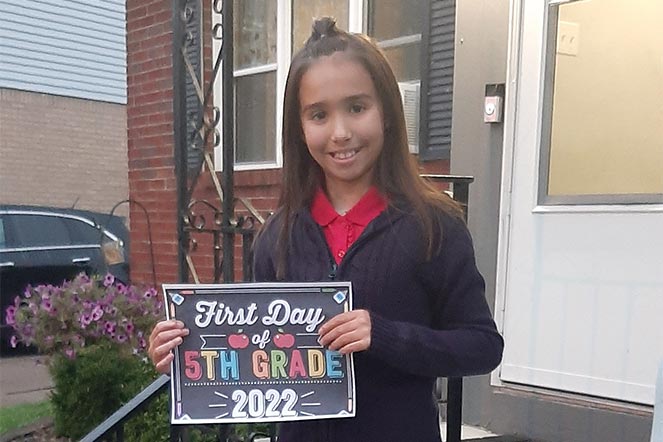 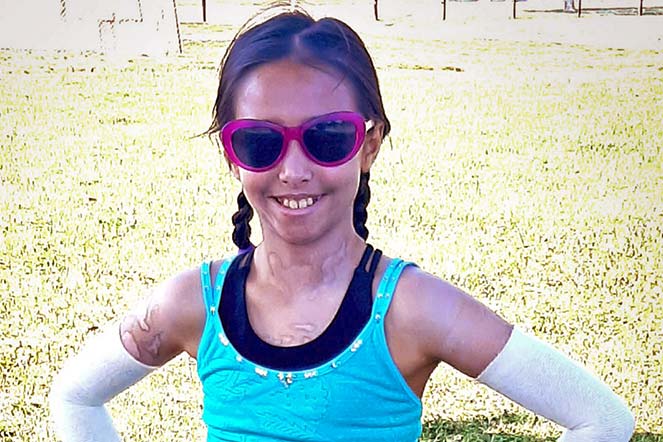