Annabelle has been a Shriners Children’s Boston patient since she was 10 months old. Her parents met in Japan while Travis was serving in the United States Marine Corps. After Annabelle was born, her parents noticed she did not have a fully formed right ear. Her pediatrician explained that Annabelle had level three microtia, a common birth difference where one or both ears is not fully developed. Travis and Sachiko initially sought treatment in Japan where Annabelle was born but because the family was soon moving to the United States, they decided to search for a physician closer to central New York, where Travis grew up and the family would be living.

Once they arrived in New York, they began contacting providers, searching for the right fit for their family. Travis’ stepfather Mike is a Shriner. He told Travis and Sachiko about Shriners Children’s and the reconstructive surgery treatments offered there. Also, Travis’ mother Robin is a registered nurse. “Her grandchildren mean everything to her and my mother was looking for the best care she could find for Annabelle. She told us there was a Shriners Children’s in Boston and a doctor named Dr. Liao - she said he is one of the best in the world. My mom found Dr. Liao and we haven’t looked back since,” said Travis. Eric Liao, MD, PhD, is co-director of the Cleft and Craniofacial Center, a collaboration with MassGeneral Hospital for Children.

Dr. Liao met with the family and detailed the surgeries he would perform to build an ear for Annabelle. Travis described the whole process as “pretty amazing.” He said, “Cartilage was harvested from Annabelle’s rib and her ear was basically built from that. The only part of her ear that was not built was her earlobe.”

The family is particularly grateful for care manager Sandy Barrett. “Sandy has been our point of contact and a shoulder to lean on the entire time.” The family also loves seeing medical photographer Susie, who has been taking photos of Annabelle since she was a baby, documenting the changes to her ear.

Travis and Sachiko are full of praise for the care Annabelle has received. “Shriners Children’s Boston is a place like no other. I have never looked forward to going to a hospital before,” Travis said.

Shriners Children’s Boston is a place like no other. I have never looked forward to going to a hospital before.

Since she was 10 months old, the family has been making the five-hour trip to Boston from the Utica, New York area for appointments. The family has had the same Shriners driver every trip, Tom Blackstone from the Ziyara Shrine Center in central New York.

Annabelle's Care Inspires Her Dad to Become a Shriner

Inspired by the care that Annabelle received and the dedication he experienced from Tom and other local Shriners, Travis decided he wanted to do something to give back. Travis recently became a Shriner himself, and plans to volunteer for the transportation program as a driver. “I can give families firsthand experience of what the hospital is like and how kind everyone is. When I told my Shriner stepfather that I wanted to find a way to support the hospital, he told me there is no better way to give back than to become a Shriner myself,” he said.

A lively 8-year-old, Annabelle enjoys playing her Nintendo Switch and attending gym class. She recently finished the third grade. Annabelle loves animals and wants to foster pets when she is older. The family has two furry friends: a chinchilla named Gus Gus and a dog named Gunnar.

Annabelle named Gus Gus after the iconic mouse from Cinderella. Gunnar is Travis’ military therapy dog who loves indulging in ice cream with his human family. Gunnar’s favorite treat is the “puppy cone” - vanilla ice cream with whipped cream and a dog biscuit.

Travis and Sachiko have some advice for other parents navigating a medical diagnosis like level three microtia. “Pick up the phone and ask questions; don’t just rely on a website. Talk to someone and ask your questions. That’s what we did and every time we had a question Sandy was there with an answer.”

Travis added that it can be daunting to navigate a journey like this as a new parent. “There is no class you can take to learn how to help your child born with a medical condition. What you can do is your research, then pick up the phone and ask your questions.”

After a recent visit, the family played the elevator game one more time as they prepared to meet Tom in the lobby for the ride back to New York.

Annabelle Celebrates With Family and Staff 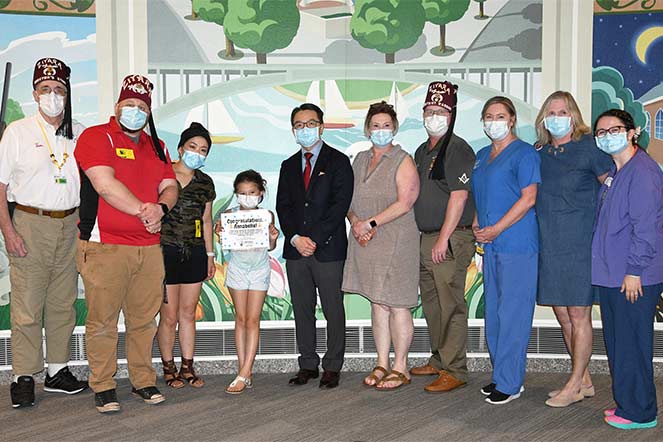 Annabelle rang the bell on her last visit, surrounded by family and staff. 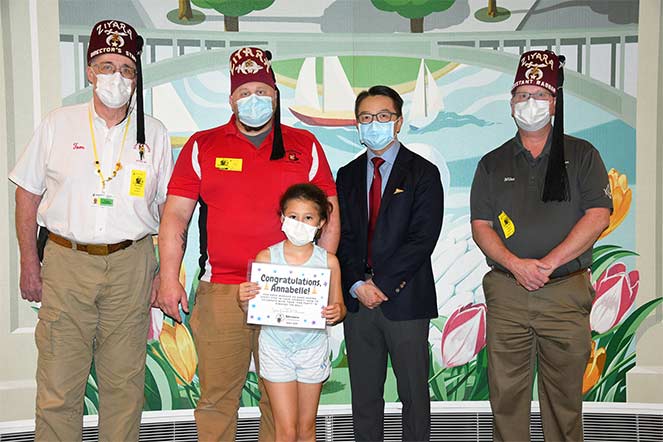 Annabelle with her father, grandfather, Shriner driver and Dr. Liao. 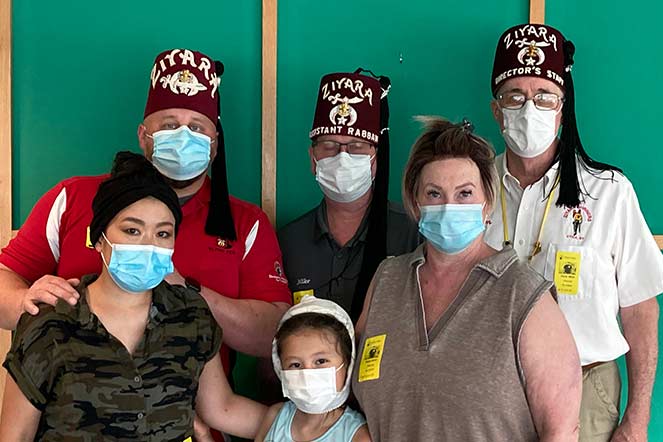 Annabelle and her family before her last clinic visit.