After amputation Tommy succeeds with special leg.
May 05, 2022

A rare birth defect, fibular hemimelia, has not stopped Tommy from an active life thanks to an experienced care team at Shriners Children's.

At their 20-week ultrasound, doctors at Prentice Women’s Hospital delivered shocking news to a Chicago couple. Their developing baby appeared to be missing a lower leg bone. The likely diagnosis was a rare condition known as fibular hemimelia. “These doctors had only seen this condition three times ever,” MaryKay, a Chicago mom, said. The diagnosis was confirmed when their son Tommy was born in 2010 without a fibula in his left leg. In addition, Tommy’s ankle bone had developed differently, causing his tiny foot to roll to one side.

Every year, roughly four of every 10,000 babies will be born with an upper limb deficiency, while two in every 10,000 will be born with a lower limb deficiency. Some babies are born with both. Limb deficiency occurs when part or all of a child's limb does not completely form during pregnancy. The family dove into researching their newborn’s condition online, looking for answers on how to help their son. “There is no known cause. It is something that happens in the first eight weeks of pregnancy somehow,” O’Leary said. They visited medical experts around Chicago and even traveled to an expert in Florida, trying to find the best course of treatment for their baby.

Eventually they began to consider amputation and a prosthetic because they believed it would allow Tommy the best quality of life. “It’s very scary. I felt like my decisions ranged from bad to worse. What decision am I going to make? It is so difficult to make a decision for someone else, for your child, about his leg and his future life.” An orthopedic surgeon at a large teaching hospital in Chicago was the one who suggested Shriners Children's Chicago. “I remember she asked ‘Have you ever heard of Shriners?’” MaryKay was familiar with Shriners Children's because she works in a Chicago school for students who have special needs. “Many of my students receive care at the hospital. I was always under the mistaken impression it was for families who don’t have insurance and needed special financial support,” she said. “But this orthopedic surgeon said ‘Go see Dr. Ackman at the Chicago Shriners hospital if you’re going to do the amputation.’ She said, ‘If it was my child that's what I would do.’”

A mom told me ‘When you get to the other side, you’ll feel so differently.’ And she was right. We are on the other side. Having a prosthetic leg doesn’t define Tommy. It’s just a small part of who he is.

Tommy Gets a Special Leg 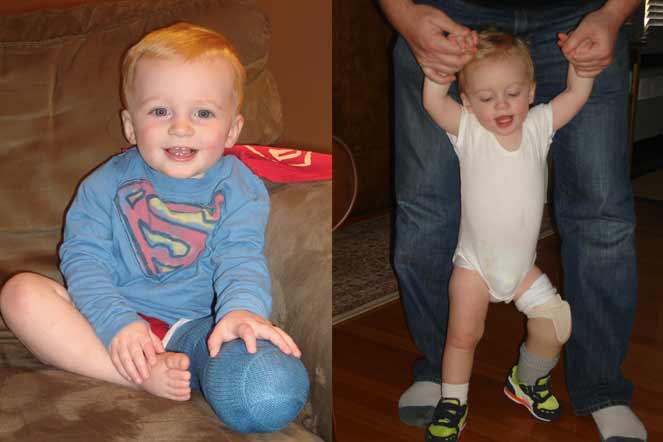 Tommy is "super" after surgery. (left) Tommy learning to walk with a little help. (right) 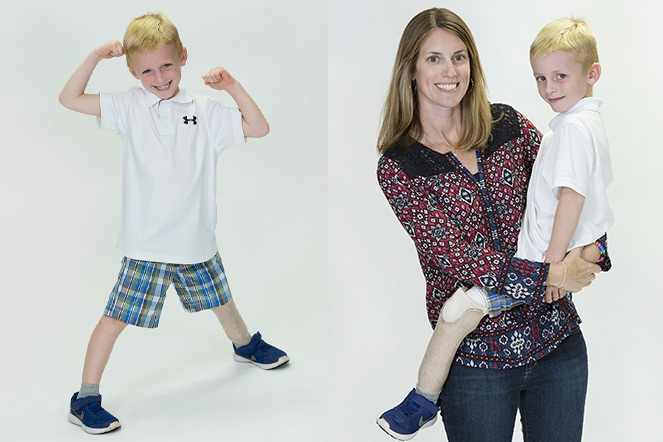 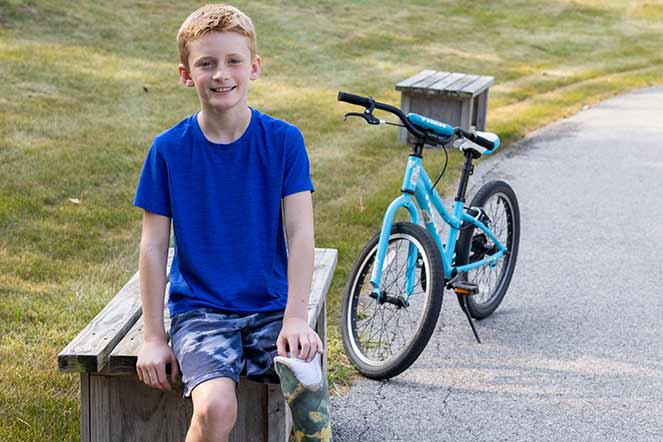 During the pandemic, Tommy learned to ride a bike with his prosthetic leg.

of bracial plexus birth injuries heal on their own