Leigh Thanks Shriners Children's for Helping Her Achieve Her Dreams

Leigh, 21, is like many other typical college students her age.

She is in nursing school at the University of Tampa, and is on track to graduate in May. She also has a part-time job in the Orientation and Family Engagement office on campus. She and her service dog, Nerf, are well known on the university campus where Leigh is active in Orientation, UT Diplomats and the Honors Program. She plays the violin, is an excellent driver and is also big sister to siblings Taylor and Skyler. There is just one difference.

Leigh has osteogenesis imperfecta (OI), known as brittle bone disease. Her bones can break very easily, and they have. She’s had 45 fractures and 14 surgeries at Shriners Children’s Florida, where she has received pediatric specialty care for most of her lifetime.

At the early age of 3, Leigh adopted a platform of gratitude. When people asked what she wanted for her birthday, she was quick to say she wanted people to donate money to Shriners Children’s Florida instead of gifts. What started as a small backyard BBQ turned into a spectacular event widely supported by Shriners International (the fraternity that founded and supports Shriners Children's) and the community. Leigh was on a quest, and in the Fall of 2015 she reached her goal of raising $1 million for Shriners Children’s Florida. Crucial to the success of this annual event was Leigh’s ability to connect community leaders, sports figures and donors to the amazing Shriners International mission.

Everyone who meets Leigh is drawn to her bright eyes, magnetic personality and amazing ability to articulate her thoughts and feelings. At a very young age, Leigh became the 2007 National Patient Ambassador for Shriners Children’s. That exposure led to travel and speaking engagements all over the country that have continued to today. Leigh continues on her quest to educate others about her condition. She has also inspired countless individuals, businesses and groups to donate to Shriners Children’s in her name.

Leigh is well-respected and admired not only by her peers, but in the community as well. She has received the Athena Society’s Young Women of Promise Award and the Anne Frank Humanitarian Award. She was also honored with the WEDU PBS “Be More Inspiring” award, and the Hillsborough County School District also presented Leigh with an award for her exemplary community service. She was named Tampa Bay Business Journal’s Healthcare Philanthropist of the Year and Community Hero by the Tampa Bay Lightning. She was the youngest donor to have a plaque installed on the Philanthropic Society Wall at Shriners Children's Florida, honoring her contributions and commitment to Shriners Children’s.

Thanks to the support and care I received at Shriners Children's, I am one step closer to my dream career as a nurse.

For many children, birthdays are about themselves. For this extraordinary young woman, her birthday became an opportunity to change the world with her birthday fundraising efforts. Her passion for helping children with disabilities has made a lasting impact on the mission of Shriners Children’s.

Despite reaching the point where she is close to transitioning to adult care and completing her portion in the National OI Study, Leigh is determined to continue her lifelong relationship with the Shriners Children's community. Leigh is grateful for the superior care she has received throughout her life, and continues to bring awareness about Shriners International and their mission. The Shriners Children's community has truly left a mark on Leigh that has shaped her into the woman she is today.

Leigh is excited to be an early member of the Patient Alumni Network. The Patient Alumni Network was formed in 2022 as part of Shriners Children's 100th Anniversary Celebration. The goal of this new network is to connect former patients with each other and provide opportunities for them to share their stories and accomplishments with patients, Shriners, donors and the public.

There is no doubt that Leigh will pass on the compassionate care she learned from her nurses at Shriners Children’s to her patients throughout her future career. This semester she completes her nursing preceptorship in the transitional nursery at Tampa General Hospital.

“Shriners [Children's] has given me the opportunity to have a successful, independent life. They will always have a very special place in my heart.”

A Lifetime of Care

Leigh became a patient when she was 3 weeks old, and two decades later she looks forward to caring for kids with the same compassion she received at Shriners Children’s Florida. 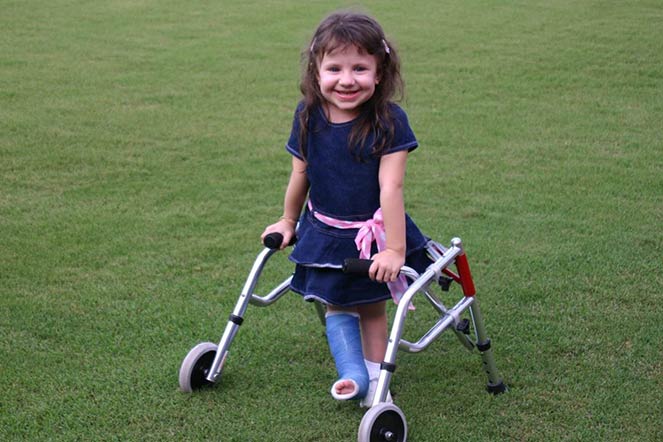 Leigh’s ambassador role for Shriners Children’s started at an early age, and she was called upon frequently to educate supporters about her condition. At age 7, she represented our healthcare system as a National Patient Ambassador. 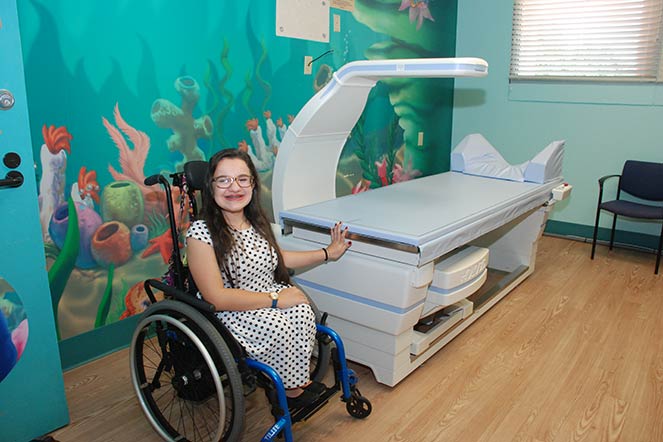 Throughout the years, the money Leigh raised helped to fund medical supplies and equipment needed for children receiving care locally for osteogenesis Imperfecta. This included the installation of a pediatric bone density-measuring machine called a “DEXA scan,” which she proudly posed in front of during the ribbon cutting ceremony in 2016. 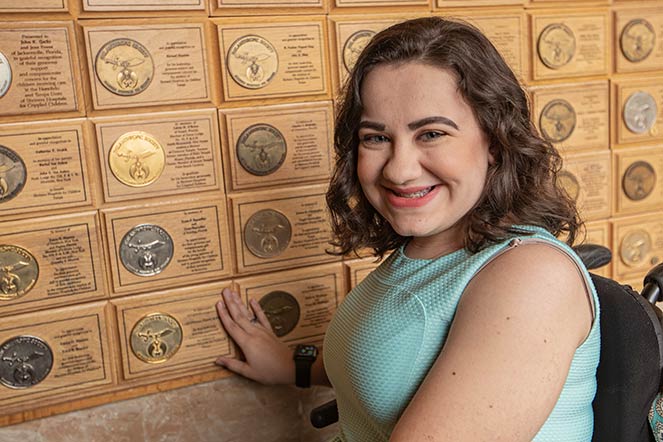 In 2015 Leigh reached her goal of raising $1 million for Shriners Children’s Florida, and her plaque on the Philanthropic Society Wall honors those contributions and her commitment to giving back.