As Cole was riding his bike a few months ago, he was struck by a vehicle and was thrown a distance of over 30 feet. He was airlifted to be treated for his traumatic brain injury (TBI). He was then referred to Shriners Children's Philadelphia for rehabilitation and speech therapy, where he has made tremendous progress. Before his accident, he played on three competitive basketball teams. Basketball is his entire life. It was an honor to be able to send Cole to play with the Temple Owls during one of their practices, and for him and his dad to watch them play at the Shriners Children's Charleston Classic

CTA.ViewTranscript
<p><strong>Kenny Craven: </strong>Today, we are partnering with Temple University to have one of our patients from the Philadelphia Hospital to come over, Cole, to be part of the basketball team.</p> <p><strong>Jennifer:</strong> Cole was going to his friend's for dinner. My phone rang and it was a FaceTime from him and a strange woman was on the other end of that phone call.</p> <p><strong>She said,</strong> "Your son Cole's been in an accident. You need to get here." She said she had walked past Cole, his friend was behind him on his bike as well. She heard the impact of his head, his head hit the windshield, and then he flew about 30 feet. She said she turned around the saw flying through the air. He cracked his frontal lobe, his temporal lobe, his brain was bleeding, he had two bruises on his brain. Shriners called me Friday with an appointment on Monday. So that's how quickly we were there. It was like we were meant to be there. We worked primarily with two different therapists that were amazing. Everybody was very helpful.</p> <p><strong>Cole:</strong> Physical therapy, that was fun because she made me lift a little bit of weights. It's really nice that they want to save other kids' lives like mine and they helped me get back to what I was normally from the accident. They kind of put me back together.</p> <p><strong>Khalif Battle:</strong> Everybody goes through something, some people worse than others. He's been through something so traumatic and he's able to bounce back that quickly. So it shows a lot about the person he is.</p> <p><strong>Aaron McKie: </strong>Sometimes you need a inspiration. I speak with my eyes about taking advantage of opportunities and just looking in young Cole's eyes, he was taking advantage of the moment, aspiring to be a college basketball player one day.</p> <p><strong>Cole:</strong> Shriners Hospital has helped me get back on the court and let me play.</p>
Dec 17, 2021

Looking at him from across the gym, you would think Cole is just like any other 13-year-old basketball-loving boy.

However, a few months ago in August, Cole sustained a traumatic brain injury after being struck by a car while riding his bicycle in the resort beach town of North Wildwood, New Jersey, where his family spends their summers. Cole's recovery is nothing short of a miracle.

Cole's injury was so significant that he required air transport to Cooper Medical Center, Camden, New Jersey, where he spent a week in the ICU. Cole sustained an intracranial hemorrhage (bleeding on the brain) as well as multiple skull fractures. It was anticipated that Cole would transfer to Shriners Children's Philadelphia for acute inpatient rehabilitation. However, his mobility had improved so dramatically that he was sent home from Cooper Medical Center and instead initiated outpatient therapies at the Philadelphia Shriners Hospital.

Mike and Jen, Cole's parents, were thrilled to have access to Shriners Children's within a short drive from their home in the suburbs of Philadelphia. Cole is the youngest of three children; he also has two sisters, Allison and Brooke, who have been cheering for their brother since the accident to make strides in recovery.

Cole's therapy program has consisted of physical and speech therapies that have focused on higher-level mobility and cognitive tasks. In physical therapy, Cole's session began with activities that challenged his balance and cardiovascular conditioning; and have progressed to speed and agility activities to fatigue. In speech therapy, Cole initially had moderate word-finding and memory recall challenges; sessions now focus on memory recall and attention to task and problem-solving. Sessions continue to progress through co-treatment, where Cole will be physically challenged while simultaneously completing a cognitive task.

Cole's amazing progress has allowed him to return to school full-time, and although he is not allowed full-contact sports yet, he is happy to be practicing skills and drills with his basketball teams.

Over the past couple of months, he has made functional and cognitive gains while working with our multidisciplinary rehabilitation team. Cole has a passion for basketball, sports and is a full-time student. At Shriners Children's, we can address his medical, physical, and cognitive needs via return-to-learn and return-to-play protocols. He is also just a great kid; it has been a joy to work with Cole.

Often, there are various opportunities at the hospital for Patient Ambassadors to have an experience, including attending fundraisers, concerts and sporting events. This is the first year that Shriners Children's has partnered with ESPN for the newly named Shriners Children's Charleston Classic (SCCC), a multi-team tournament with some of the top college basketball programs highlighting their skills. One of the eight teams playing in the SCCC is Temple University Men's Basketball team. The event took place November 18-20. Shriners Children's Philadelphia is on the Temple University Health Science Campus; the playing facility is about 1 1/2 miles down the street.

An opportunity to visit and watch the Temple Owls practice became available, and an email request was shared with the rehabilitation team at Shriners Children's Philadelphia. One of his physical therapists, Christen Krey, PT, remembered how much Cole loved basketball. When it was presented to his mother, Jen, she knew Cole would enjoy this experience. The rest of the family was welcomed to attend the practice as well.

His mom kept it a secret. She told Cole that the whole family was going to the doctor's appointment, and then they would go to lunch or do something fun. Cole usually takes some time in the central activity area of the hospital to shoot basketball on the arcade basketball game or grab a meal in the cafeteria.

Cole and his sisters, Alison and Brooke, all skipped school that day, and it was worth it! Since Cole's accident, it has been difficult for his whole family. His mom and dad snuck his basketball sneakers in the car before they left home. They kept driving past Shriners Children's down to the practice facility on North Broad Street. That is where members of the Temple Basketball Program and Kenny Craven, First Vice President, Board of Directors, Shriners Children's, greeted Cole and his family.

Cole had no idea what was going on and why he was not at a doctor's appointment! He was whisked upstairs to the practice floor to have a front-row seat of practice. Third-year head coach and one of the greatest players in Temple Basketball history, Aaron McKie, leads the squad. After practice wrapped up, Cole shot some hoops and heard Coach McKie's motivational speech to the players at the end of practice. Coach McKie welcomed Cole and his family to hang out on the court and shoot some hoops with the team. They were also escorted over to the locker room in the game facility. Cole and his family really felt the love shown to them.

Jen sent a thank-you and said, "Cole truly hasn't been this happy since the accident. He has had smiles all day long, even now, as he is getting ready for bed! He was still wearing the new Temple hoodie that was gifted to him."

Cole and his dad attended the Shriners Children's College Classic, nearly three months from the day of his accident. He may not be able to play basketball right now, but he has hope that one day he will be back playing contact sports after finishing his rehabilitation program at Shriners Children's.

Learn More About Our Rehabilitation Program

Request an Appointment
Compassionate, innovative care that improves the quality of life for children and their families.

Fun On and Off the Court

Cole was playing in a summer basketball league, hanging out and having fun. He was riding his bike to meet up with friends and was struck by a car. After his initial hospitalization, his family needed a rehabilitation hospital for his next phase of care, and that’s when they came to Shriners Children’s. 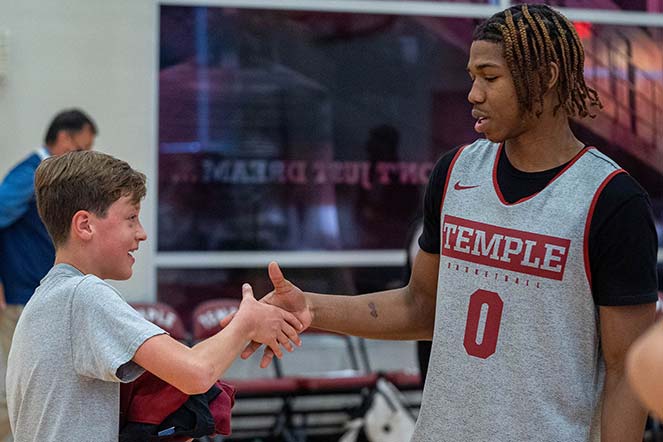 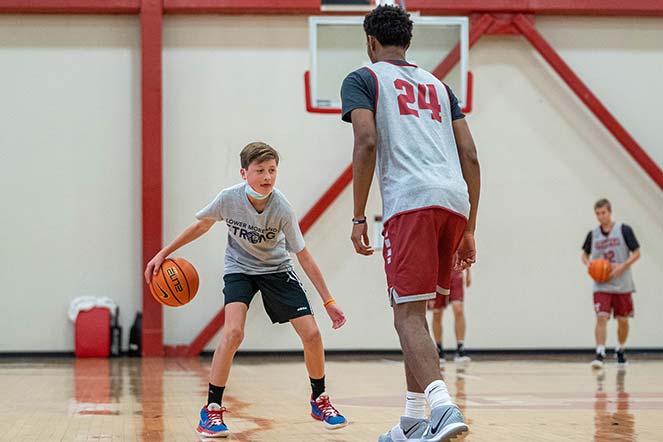 Cole is on the court with some of the players. 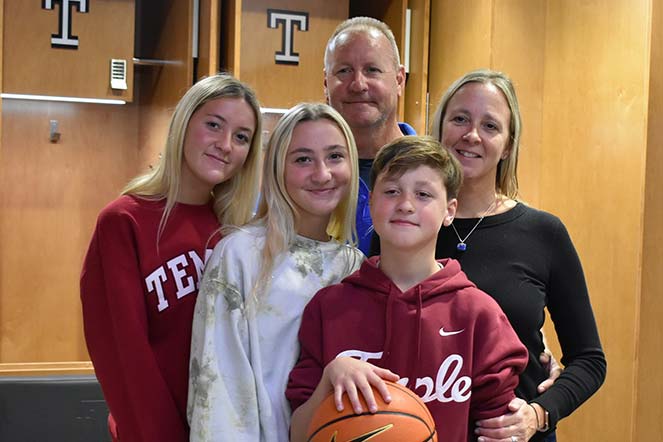 The whole family got to experience the behind-the-scenes at practice. 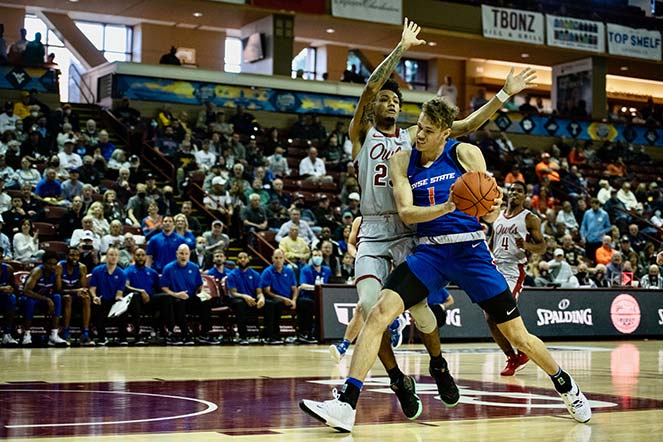 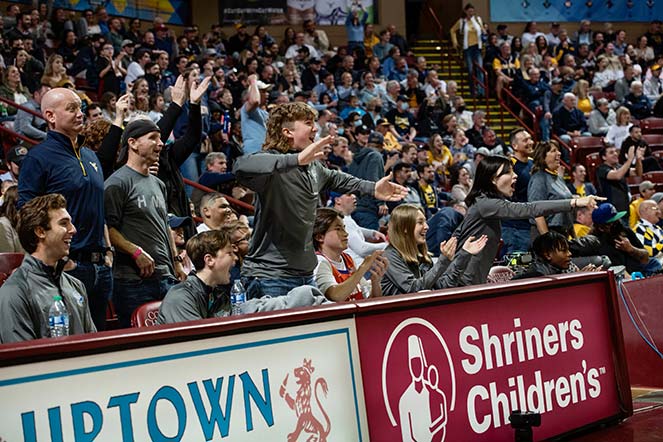 The Patient Ambassadors cheering on at one of the games at the Shriners Children's Charleston Classic. 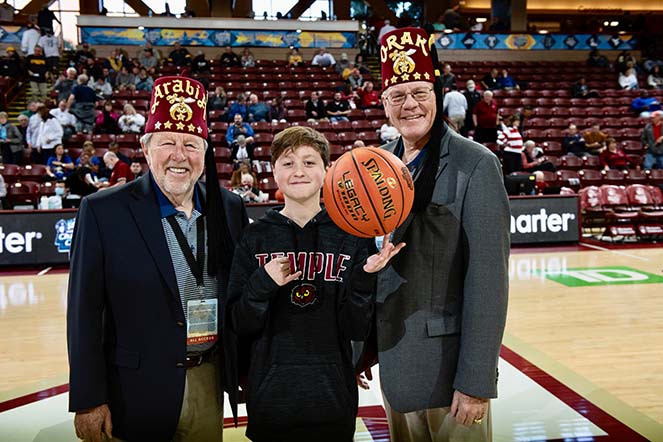 Cole was able to meet members of the Joint Boards of Shriners Children's.