Inspiring others through resilience and positivity
Sep 13, 2021

When Mykyta first came to Shriners Children's Boston four years ago, he was 14 and facing a mountain of uncertainty.

He had suffered a life-threatening electrical burn in his home country of Ukraine that covered 80% of his body. Mykyta’s treatment and recovery were sure to be difficult and tiring filled with ups and downs that would span many years. Since 2017, Mykyta has undergone multiple procedures and spent months at a time away from his home. Much of that time has been devoted to surgeries and subsequent lengthy recoveries.

Mykyta faced it head on — all with a smile on his face. Now 18, Mykyta is out playing sports with his friends just like he used to. Basketball and soccer are two of his favorites. He’s also in college, majoring in management at Kyiv-Mohyla Academy and currently working in social media and marketing. He hopes to one day run his own marketing company.

Recently, Mykyta returned to Shriners Children's Boston. He and his mother are working with his doctors to consider several reconstructive surgeries. One procedure was a complex nerve reconstruction. This surgery, performed by plastic surgeon Jonathan Winograd, M.D., has improved his range of motion in his right elbow.

In addition to Dr. Winograd, Mykyta’s care team includes Gennadiy Fuzaylov, M.D. who was key to facilitating Mykyta’s transfer to the United States from Ukraine in 2017. Plastic/reconstructive surgeon Daniel Driscoll, M.D. who has performed surgeries concentrating on scar improvement for Mykyta, is also part of the team.

“It is rewarding to work with a patient like Mykyta who is very involved in making decisions about his care. Mykyta is a remarkable young man; his strength and perseverance have been instrumental to his progress,” Dr. Driscoll said. Dr. Driscoll and pediatric anesthesiologist Pacifico Tuason, M.D. recently performed a surgery that will improve Mykyta’s function and appearance in his neck and head.

Robert Sheridan, M.D., interim chief of staff and medical director of the burn service at Shriners Children's Boston, managed Mykyta’s treatment in collaboration with the acute care team when he first became a patient. “High-voltage electrical burns are difficult to manage for several reasons. Currents at these energy levels can take multiple unpredictable paths through the body creating deep entry, exit and arch wounds, while damaging deep tissues and organs, including the heart. Clothing often ignites creating extensive surface burns. And patients can suffer blunt trauma from falls and intense muscle spasms that occur during the electrocution. Mykyta’s injuries were among the most difficult we see, requiring multiple operations and critical care during the early phase of his care. His resiliency and drive are really remarkable,” said Dr. Sheridan.

Shriners is a big and kind family that saves lives. Shriners saved my life and I will be grateful for the rest of my days.

Despite being so far from home, Mykyta and his mom, Maryna, are happy to return to Shriners Children's Boston after the COVID-19 pandemic made international travel impossible for months. “We’re happy to be here…we have a lot of emotions with this whole building and so many special memories with the staff members,” Mykyta recalled, reflecting on his first visit to Shriners in 2017. One special staff member is Occupational Therapist Courtney Condon. Mykyta remembers that Courtney was the first person to get him up and outside as he was recovering. In turn, Courtney has great admiration for Mykyta. “Mykyta always has a positive attitude and is up for any challenge in therapy. The success from his recent procedure is a direct correlation to the amount of hard work he has put in,” she shared.

Because Mykyta was injured at 14, he has spent nearly all of his teenage years in and out of the hospital dealing with intensive surgery and care for his injuries, a journey that very few teenagers can relate to. He has this advice for other teens who have suffered a serious burn injury: “Don’t think about why it happened. It may be difficult to accept, but the sooner you do, the sooner it becomes easier. You may be able to grow even stronger because of what you go through.”

For Mykyta, keeping a positive attitude has been key for his recovery. He acknowledges that he has always been a positive person, but he adds, “I think it’s because of Shriners…every staff member helped me to be happy, to understand that everything is fine, that everything will be better.” Mykyta and Maryna are so grateful for the hospital’s mission to care for patients like him regardless of the ability to pay or insurance status. Drs. Driscoll, Fuzaylov and Tuason are all Aleppo Shriners, which adds a special connection between his care team and the invaluable philanthropy of the Shriners International fraternity.

Mykyta also talks about having the support of not only the staff at Shriners Children's, but the support of his own family as well. Back home in Ukraine, Mykyta lives with his mom, dad, grandmother and younger brother Matvey. He and his family have a very strong emotional bond. “Family is very important to me, I love them and they love me. It helps us to get through this and just be happy.”

Similar to his prior visits to Shriners Children's Boston, Mykyta will be spending a few months in the city. When he can, Mykyta likes to walk around Boston with his mother,and they often go down to the Charles River to spend time outside. When he’s not at Shriners Children's for an appointment or taking in the sights, Mykyta works remotely, managing the seven hour difference between Boston and Ukraine.

“Everything is cool, actually.” Mykyta remarked. The casualness of his statement serves as a powerful indicator of just how far he has come. From what his mother described as “the worst time of his life,” to living the life of any average young adult, Mykyta has triumphed in the face of tremendous adversity.

Mykyta says that he is simply living his life “just with new scars.” To Mykyta, Shriners Children's Boston certainly helped him with the physical aspects of his injury, but the hospital and staff also helped him with the emotional and mental aspects of his journey to recovery, allowing him to resume the life of a teenager and look forward to exploring all that adulthood has to offer. In his own words, Mykyta said, “Shriners is a big and kind family that saves lives. Shriners saved my life and I will be grateful for the rest of my days.”

Due to an electrical burn injury, Mykyta has spent nearly all of his teenage years in and out of the hospital. During this time, he has formed strong bonds with staff members who have cared for him and supported him over the years. 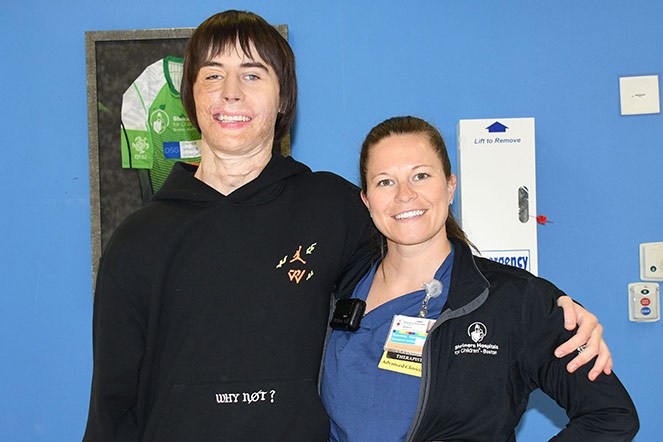 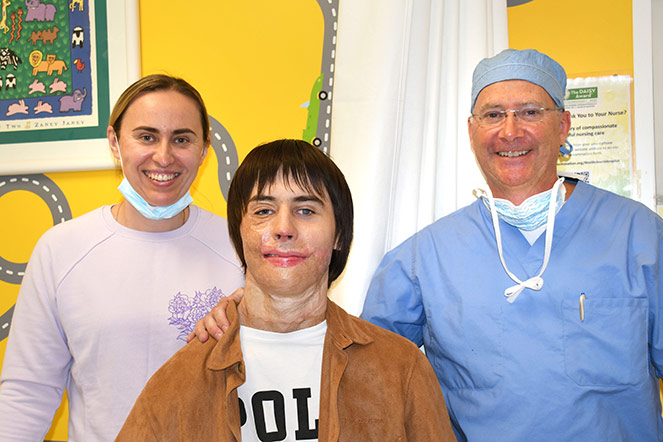 Mykyta with his mother, Maryna, and Dr. Dan Driscoll.