Eighteen-year-old Griffin is an avid golfer who also enjoys video editing and production.

Griffin recently graduated from Phillips Academy in Andover and is now a student at the University of Florida in Gainesville.

Griffin has been coming to Shriners Children's Boston for cleft lip and cleft palate treatment most of his life. “Whenever we go into Shriners for an appointment, they make us feel like we are the only people there. As I got older, it almost did not feel like I was going to a hospital because everyone knew me. The surgeon, the nurses and the people at registration were the same people even after years of being a patient,” Griffin shared.

Griffin’s mother Jennifer described how she and her husband Dave learned of Griffin’s diagnosis. During an 18-week ultrasound at Mass General Hospital (MGH), Griffin’s hand was covering his mouth, obscuring the image. Clinicians tried to get Griffin to move his hand, but were unsuccessful. They also noticed a white spot on Griffin’s heart.

“We were told the spot would only be concerning if it was in conjunction with a short femur bone or other abnormality. My obstetrician ordered a second ultrasound at 24 weeks to ease my mind about the white spot. That was when we learned Griffin would be born with a cleft lip and cleft palate,” Jennifer said.

The expectant parents were confused and devastated. They were referred to Michael Lewis, M.D., who practiced at both MGH and Shriners Children's Boston, to develop a care plan upon the baby’s arrival.

Griffin had cleft lip surgery at MGH when he was four months old and cleft palate surgery six months later. Dr. Lewis then asked the family to consider transferring to Shriners Children's Boston because he would be spending more time practicing there moving forward. The new parents wanted Griffin to continue seeing Dr. Lewis so they made the transition to Shriners Children's. Jennifer describes that moment as “the beginning of an unbelievable journey.”

As Griffin got older, his visits to Shriners Children's Boston became more routine. He had an annual clinic visit with the plastic surgeon, maxillofacial surgeon, and orthodontist. The majority of Griffin’s care became orthodontic as he got older. Griffin is scheduled to have jaw surgery next summer, which will be his final surgery.

“We feel part of the Shriners family, and this is a unique experience,” Jennifer and Griffin shared. They pointed out how helpful it is that treatment here is not dependent on money from patients’ families. “Shriners does not even charge for parking! Removing these worries enables families to focus on their child and their care and recovery,” they said.

Knowing that people have absolutely no idea my 18-year-old son was born with a cleft lip and palate is a tribute to Shriners.

The family appreciates Care Manager Sandy Barrett, who has worked with Griffin for over 15 years, answering questions and addressing any concerns. Nurse Kathy Hannigan makes the family feel right at home during clinic visits. Medical photographer Sue Brogna has been taking photos of Griffin since he was a toddler. “It is evident the joy she gets from working with these children,” Jennifer said.

Over the years, the family developed an appreciation for the life-changing burn care at Shriners Children's Boston. “Knowing the impact that Shriners has had on families’ lives is beyond heartwarming. I distinctly remember a visit shortly after the earthquake in Haiti. Several severely burned children traveled from Haiti for care. We felt fortunate to be at such a world-class hospital,” said Jennifer.

Jennifer believes the challenges of managing a cleft lip and cleft palate diagnosis made her family stronger. “During the years of the surgeries, our family tried our best to stay positive. It was not always easy, especially when Griffin was a baby, screaming in the grocery store. People would stare at his face wondering what was wrong. After the initial surgeries, life got easier,” she said.

Jennifer says her family is fortunate to live near Boston with access to the incredible care at Shriners. “As I look back on our experience, I truly feel that Griffin’s cleft lip and palate was a gift. We never took our health for granted, and we never judged people based on their physical appearances.”

During Cleft and Craniofacial Awareness month, Griffin is sharing his story to give other families hope. Jennifer says, “When you go through a crisis, it is your crisis, and you work through it in the best way you can. Knowing that people have absolutely no idea my 18-year-old son was born with a cleft lip and palate is a tribute to Shriners.”

Now 18 years old and a college student, Griffin has been a patient at Shriners Children's Boston since before he was even born. 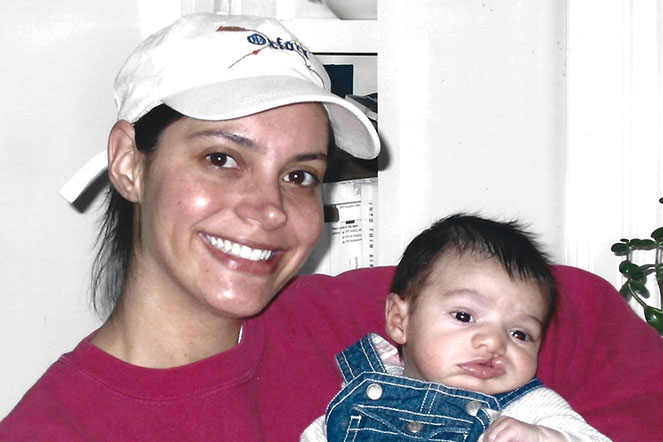 Jennifer said that Griffin's cleft lip and palate diagnosis made their family stronger.