Kendyl's journey: fueled by specialty care and a bond with her father
Jun 02, 2021

Hearing your child has clubfoot in utero can cause concern for new parents. However, this family was at peace, drawing from their own history overcoming club feet with the help of Shriners Children's.

Brent and his wife, Jillyn, took the diagnosis in stride when other parents might have been alarmed. Even the ultrasound tech was rattled. The exam revealed their daughter had a clubfoot.

Clubfoot may be related to a combination of genetic and environmental factors, and having a family history of clubfoot can increase chances of a child being born with a clubfoot. Even though they’d already had two children born without club feet, Brent and Jillyn were prepared for the possibility. Brent described even feeling happy at the prospect of returning to his beloved hospital to seek care for his newborn daughter, Kendyl.

Kendyl’s family drove from Chubbuck, Idaho, to Salt Lake City, Utah, to begin Kendyl's serial casting when she was just 10 days old. Her customized treatment plan has been successful, including the Ponseti method and a surgery performed by Assistant Chief of Staff Theresa Hennessey, M.D., to give her a little more flexibility.

The Ponseti method is the most widely used technique today to treat children with clubfoot. It includes massage and serial casting, Achilles tenotomy in most cases, and bracing, all of which can be done at most Shriners Children’s locations .

Kendyl, now 5 years old, has been a happy patient from the beginning, embracing her care like a pro. As early as age 2, she would dutifully bring her nighttime braces to her parents, explaining that she was tired and ready for bed.

Prior to her treatment, Kendyl’s parents took a mold of her foot to preserve the memory and to be able to show Kendyl her remarkable transformation when she was older. The mold shows how she would have been walking on the side and top part of her foot if it weren’t for her early intervention.

She doesn’t stop … she goes and goes and is able to keep up with her siblings. Without her care at Shriners Children’s Salt Lake City, she wouldn’t be able to do any of that.

Brent has nothing but gratitude for his own life-changing care, but recognizes treatment methods for clubfoot have modernized since he was a child. He sees how Shriners Children’s has adapted. Though it has been decades, Brent, now in his forties, remembers his clubfoot journey well. Both Shriners Children's Portland and Salt Lake City had a hand in his care, giving him the ability to live life to the fullest – walking, running and even mountain biking.

Brent’s treatment included a number of surgeries and braces from the hips down. This is quite different from today's treatments, with surgery necessary less often and the use of braces is minimal.

“Back then, interventions were more invasive,” he explained.

One thing that hasn’t changed is the loving care, a common thread he sees throughout his and Kendyl’s experiences. He remembers the staff making him feel like "the best kid on the planet," and that culture remains today.

“Everyone there makes Kendyl feel like a million bucks,” said Brent, and he marvels at the compassion.

“Every single person who has had a hand in Kendyl’s care has been great, from front desk greeters to the doctors – everyone makes her feel special,” said Brent. “Not all hospitals are like that.”

He also appreciates how everyone makes his daughter feel. “The doctors do a good job of making sure Kendyl’s questions are answered and that she feels safe,” said Brent. “If she is in a new situation, she shuts down speaking-wise, but the whole long drive home, she is chatting about her positive experience, even down to the smallest details – like the colorful clinic rooms.”

Their shared experiences have been bonding for both father and daughter. At every step in Kendyl’s treatment, Brent has had the unique opportunity to relate. When she had casts applied, he showed her pictures of his casts.

“I can say with certainty that this is going to be okay,” said Brent. “We don’t spend time crying about it, or wondering why did this happen to us. For us it’s more about gratitude for the staff and the specialized care.”

Hope for the Future

Kendyl is looking forward to starting kindergarten next year, with a variety of interests and skills in tow. She is an incredibly creative little girl who loves markers, crayons and coloring. Her lively imagination helps her make up stories. With her last surgery complete in spring of 2021, clubfoot is a thing of the past and now she can focus all of her energies on learning, making friends and having fun.

“She doesn’t stop … she goes and goes and goes and is able to keep up with her older sister and brother,” said Brent. “Without her care at Shriners Children’s, she wouldn’t be able to do any of that.”

Diagnosed with clubfoot during an ultrasound, Kendyl would quite literally follow in her father's footsteps, who also credits Shriners Children's for his ability to walk today. 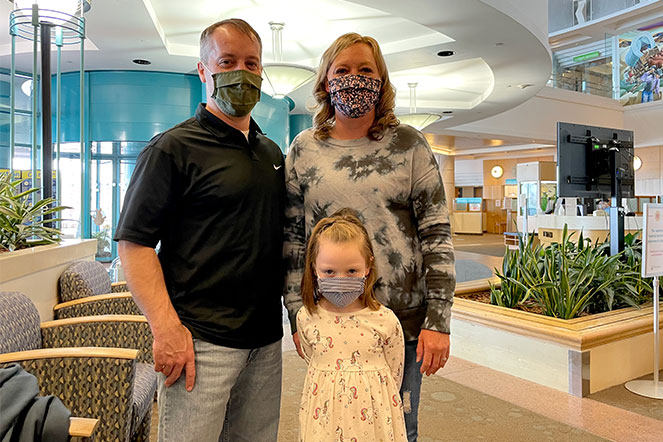 Kendyl poses with her mom and dad moments after getting a cast off at Shriners Children's Salt Lake City. 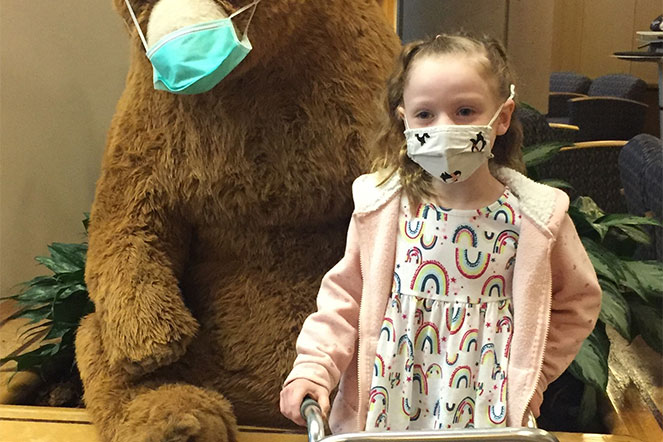 Kendyl uses her walker for support following a successful procedure to help give her more flexibility. 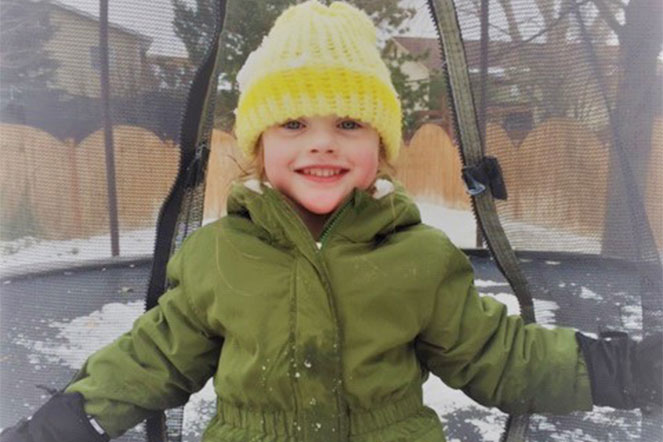 Nothing can stop Kendyl from enjoying trampolines - not winter, and certainly not clubfoot! 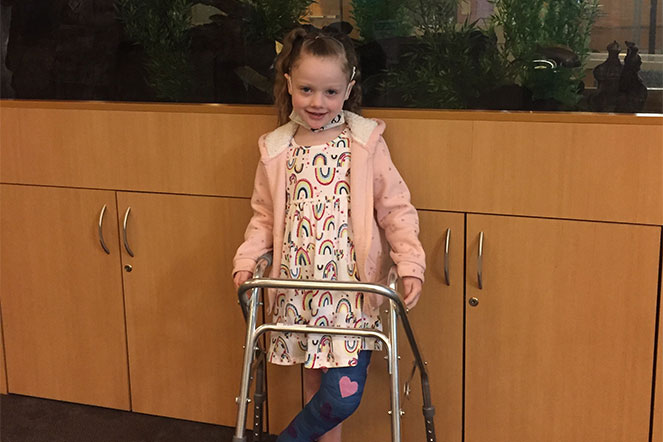 It wouldn't be a visit to the Salt Lake City location without saying hi to the fishies. 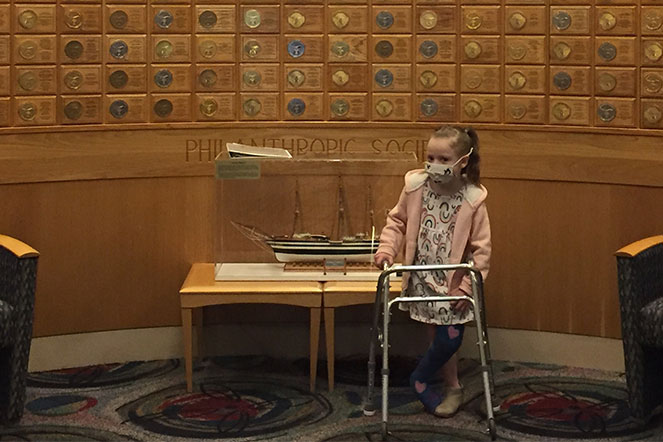 Kendyl checks out the philanthropy wall which recognizes donations of $250,000 or more.