Jordan has grown up with the mindset that she can – and will – make her dreams a reality.

Yet, throughout Jordan's 13 years, she and her parents have been told numerous times by medical professionals, teachers and coaches what she cannot do.

Jordan was born with Focal Dermal Hypoplasia, also known as Goltz syndrome, which is a rare genetic condition that often causes skeletal abnormalities in utero. Because of this syndrome, Jordan had an amputation to remove her foot at just a few months old, and was referred by her surgeon to Shriners Children’s Twin Cities. She had her first appointment at 10 months old, and was immediately fit for her first prosthesis in the Pediatric Orthotic and Prosthetic Services (POPS) department.

But that’s just the beginning of her story.

“Ever since that first appointment, we began thinking of Shriners as Jordan’s ‘Dream Team’,” said her father, Chris. “And this Shriners team has impacted our whole family.”

When Jordan turned 5, her parents signed her up for Camp Achieve — a camp that Shriners Children’s offers to children with limb deficiencies. Here, patients try activities and sports they may not have otherwise been given a chance to experience.

“When Jordan showed up for her first day of camp, she was quiet and reserved,” said Maureen Johnston, the child life specialist who created Camp Achieve. “However, it did not take long for her to join in and bond with the other campers and start trying new things.”

Throughout the following eight years, Jordan attended not only Camp Achieve, but several other camps that Shriners Children’s Twin Cities offers — such as the Winter Achieve downhill ski day and acting camp, Camp Bravo.

“She would come home so exhausted from Winter Achieve and Camp Bravo,” her mother, Rachel, said. “These two camps took her so far out of her comfort zone — but in the most positive way possible."

Maureen said that not once in eight years of attending camp did she ever hear Jordan say, “I can’t do that.” Whether it was sports or acting – she tried it all.

“Watching Jordan’s confidence grow through our camp program has been such a joy,” said Johnston. “At her first Camp Bravo when she was 6, she shared lines with another camper. Over the next seven years, she went from reciting her own dialogue to having larger parts, singing parts and even using her gymnastic skills in the productions. Confidence indeed!”

But it’s more than just the medical care and the camps that Shriners Children’s has contributed to Jordan’s confidence and abilities. A couple of years ago, the clinic gifted her an adaptive bike through a grant the facility received. For an 11-year-old, a bicycle represents freedom.

“The bike has been an absolute dream,” Chris said. “She has severe vision loss and uses a prosthetic leg – so we could never afford the kind of bicycle she needs. But now, we can ride bikes as a family. It’s helped her cardio capacity and has expanded her world.”

Expanding her cardio capacity is important for this avid gymnast. She’s currently on the high school varsity gymnastics team as a 7th grader. Her love of gymnastics was kindled at age 4 when her parents enrolled her in community education classes for the sport.

“She took to it immediately,” Rachel said. “When that first class ended, the instructor invited her to attend classes for older kids – because she was ready for a more structured and advanced class. It slowly evolved to us turning our living room into a gymnastics training center with a beam, mats, mini trampoline and a set of bars!”

Jordan has accomplished all these things because she’s a strong and determined young woman, and her parents are supportive and encouraging. But she and her parents give credit to her team at Shriners Children’s, too.

“Every time we get to a place that feels like limitations are closing in, they have been there for us. Jordan's prosthetic leg had become a significant roadblock to advancing to higher levels on her gymnastics team. The weight and lack of ability to push off of her foot to jump was stopping Jordan from advancing. We talked about this with our Shriners prosthetics team and a decision was made to try a different foot that has propelled Jordan into a new level of gymnastics,” Chris said. “The people at Shriners are our DREAM team.”

Intro Description: With the help of custom prosthetic legs built in POPS, Jordan has conquered her goals of doing gymnastics, riding a bike, performing on stage and showing everyone what she can do! 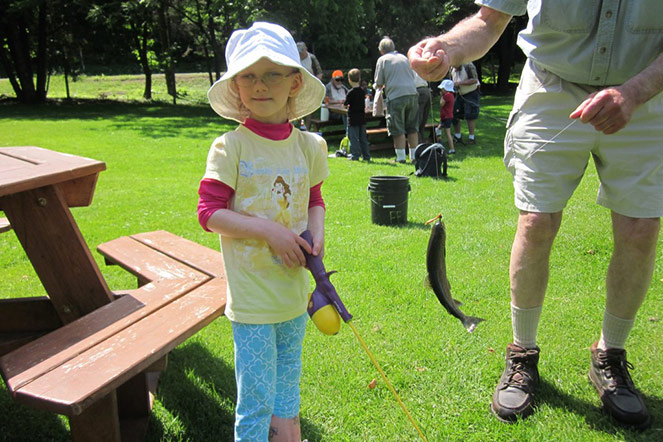 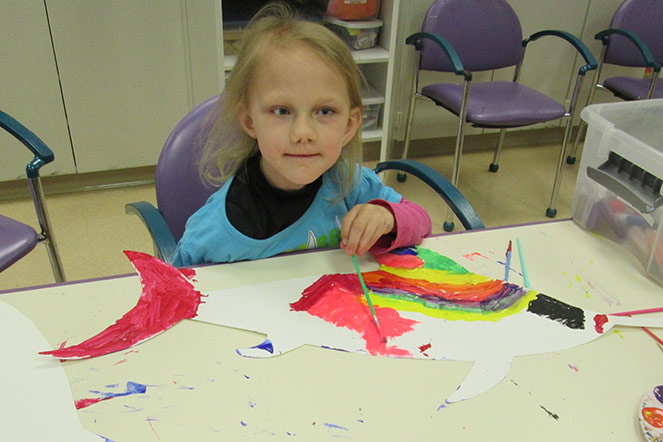 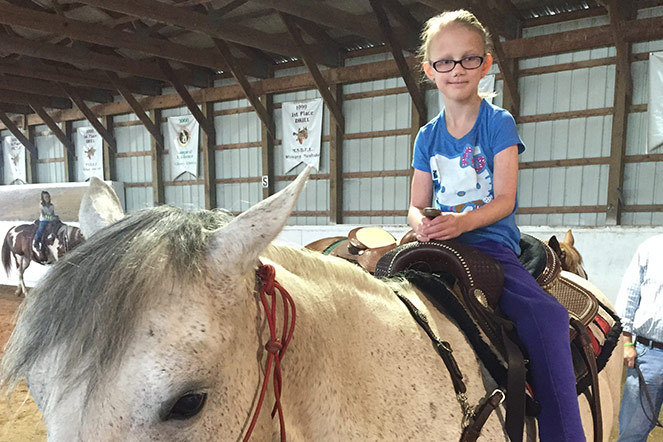 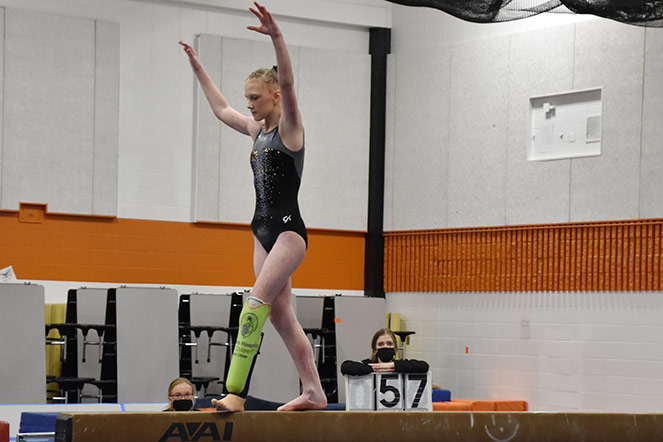 Don’t just dream, get on the beam. 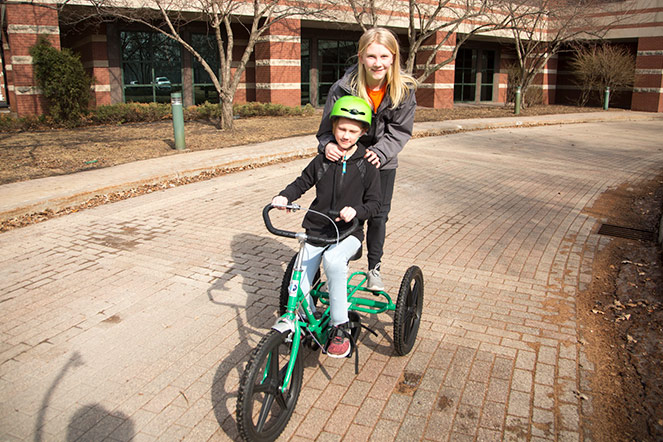 Biking with your sister is the best! 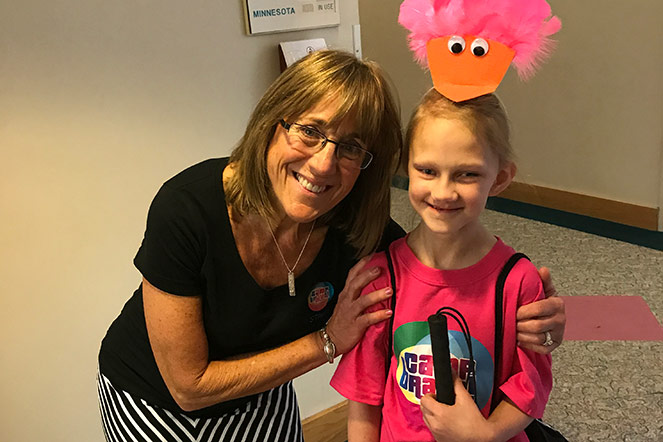 Jordan and Maureen at Camp Bravo 2017. 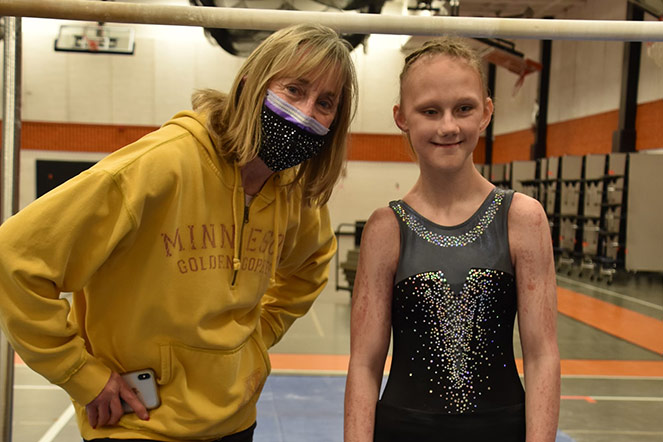 Jordan and Maureen at gymnastics 2021.