Brace Yourself to Meet Alexis

Alexis sees her scoliosis diagnosis as a way to positively help others.
Alexis explains her organization EmBrace You

When Alexis was diagnosed with Juvenile Idiopathic Scoliosis, she made it her goal to find a way to help others diagnosed with her same condition. EmBrace You is her organization that makes and provides Brace Bags for kids to keep their brace in during activities. For more information about EmBrace You, or Brace Bag pickup/mailing options, email: Info.EmBraceYou@gmail.com or call: 701-226-8536

CTA.ViewTranscript
<p>Alexis:</p> <p>Hi my name is Alexis I'm 13 years old live in North Dakota and am the proud founder of embrace you. In March of 2018 I was diagnosed with adolescent idiopathic scoliosis instead of letting this life-changing diagnosis get me down i decide to use it as a way that I can help others so I created my own organization called embrace you embrace you was founded to promote scoliosis awareness provide peer-to-peer support and my favorite part getting to create and distribute brace bags to scoliosis patients which is what i wanted to talk about today. Even though I had to wear my back brace 20 hours a day there were times when I had to take it off for gym class at school or for other activities my gym locker wasn't big enough and it's hard to find a bag that's large enough to fit the bulky back braces many scoliosis patients have to wear I carried mine around in a large crinkly shopping bag which was embarrassing until i realized that something needed to change talking with other scoliosis patients I realized that this was a problem that many others had too and so the idea for brace bags was created. My aunt helped me to create the pattern for brace bags which are large drawstring bags helpful for brace transportation.&nbsp;<br /> <br /> Embrace you currently partners with Shriners Children's the goal is to get these bags distributed to all scoliosis patients doctoring at shriners locations around the country but with each location needing an average of 100 bags per year a lot of brace bags must be completed and that's where you come in. Embrace you is in need of your help so we can continue to provide these bags free of charge to scoliosis patients do you like to sew brace bags. Are easy and fun to make with a good understanding of instructions and when all materials are purchased on sale each bag costs less than ten dollars and can be completed in under one hour contact me for easy to follow instructions. Donations of materials to help make the bags as well as monetary donations are all so appreciated. We use donations to help create the bags as well as cover shipping costs. Thank you so much for supporting embrace u and for helping scoliosis patients like me around the country.</p>
Jul 08, 2021

"I know that dealing with scoliosis can be difficult and sometimes a bit scary. But, instead of letting my life-changing diagnosis get me down, I decided to turn it into a way to positively help others." - Alexis

As the reigning Miss Pre-Teen Flickertail State International, Alexis spent much of 2018 giving a talk about "Choosing Happiness." At 11 years of age, not only was Alexis' stage presence impressive, but the content proved she was wise beyond her years.

"Listening to Alexis present at such a young age was literally jaw-dropping. I don't know a lot of adults who give presentations with the ease and grace that she does," recalls Lauren Elm, marketing manager at Shriners Children's Twin Cities.

"Each and every morning, we have the opportunity to choose to be happy. I'm on a mission to spread sunshine and smiles," Alexis beautifully presented.

Alexis' mindset to choose happiness was challenged when she was diagnosed with adolescent idiopathic scoliosis in March 2018.

"A seamstress who was altering one of Alexis' pageant dresses noticed that her shoulders were uneven," said Nicole, Alexis' mother. "Shortly after she pointed that out, I saw a flyer in our hometown of Bismarck (North Dakota) for a Shriners Children's Twin Cities screening clinic that was being held locally. It was at that screening that our lives forever changed, as the doctor there found three curves — one in her neck and two in her spine — and diagnosed Alexis with scoliosis."

Over the next few years, Alexis and her family made the seven-hour trip (each way) to the Twin Cities roughly 12 times. They felt Shriners Children's Twin Cities was the right option for them and worth the drive because of the benefits of seeing Drs. Christopher Vara and A. Noelle Larson, who both specialize in pediatric orthopedics, with a sub-specialty in caring for children's spines. On-site custom orthotists to make her scoliosis brace, physical therapists and a radiology suite were all added bonuses.

"We were thrilled to find all of the treatment Alexis needed under one roof, so it was worth spending 14 hours in the car and staying a night or two in a hotel for every visit," said Nicole. "The fact that we were able to stay in the same building for her X-rays, physician visits, physical therapy and for her bracing needs, it was a no-brainer to us."

Alexis enrolled in the Scoliosis Specific Exercise (SSE) program, which is a non-traditional 3-D treatment approach through physical therapy. The SSE program focuses on educating patients about body awareness while using sensory-motor and kinesthetic training, with a goal of creating stability around their corrected posture.

The in-house orthotists in Pediatric Orthotic Prosthetic Services (POPS) built three custom scoliosis braces for Alexis. She also had the benefit of low dose radiation X-rays via the EOS imaging system for the nearly 20 images she's needed during her care.

I feel it's important to practice what you preach, so even though I was sad and worried about my scoliosis diagnosis, I decided to focus on positivity and ways to be happy.

Her first positivity project was a toy drive.

"While at Shriners, I got to pick out a toy after my tests and procedures. I realized there weren’t many toy options for kids my age, so I organized a toy drive specifically focusing on toys and items that adolescents would find interesting and enjoyable," said Alexis.

"While in the SSE program at Shriners, I met other North Dakota girls with scoliosis. I thought it would be nice to have an organized place to gather and talk about what we were going through and after doing some research, I learned about Curvy Girls, but realized that they didn't have a presence in my state," said Alexis. In June 2019, Alexis started the first Curvy Girls chapter in North Dakota, which now has approximately 25 members.

Her third positivity project was a public awareness campaign for Scoliosis Awareness Month in June 2019.

Alexis put her public speaking skills to use to advocate for scoliosis awareness. "I worked with TV stations, local magazines and health care providers to do features about girls with scoliosis and how to be proactive in early detection. It was really impactful seeing a high school friend, who hadn't previously talked openly about her scoliosis, go on TV and social media for the first time with her own story to help raise awareness."

In addition, Alexis and Nicole promote the use of the Shriners Children's SpineScreen app for early detection of scoliosis. The SpineScreen app is available to download in the Apple and Google Play stores.

Alexis' most recent positivity project is the founding of her organization, EmBrace You.

"EmBrace You was inspired by my love of public speaking, being a scoliosis awareness advocate and my desire to help others with peer to peer support." Alexis' favorite part is providing stylish and discreet bags for kids to transport their scoliosis brace.

"One of the challenges I found was having a place to store my brace when I would take it off to participate in physical activities, so I created my own brace bag. My dream is for all patients at Shriners Children’s Twin Cities, when they are given their first brace, to be able to take an EmBrace You bag home. I would also love to expand Brace Bags to all Shriners locations and provide them for ALL scoliosis patients!" In the first year of EmbraceYou, 75 brace bags have been distributed to Twin Cities patients.

Despite Alexis diligently wearing her brace and participating in the SSE program, her spine continued to curve. Her scoliosis started at around a 22 degree curve in 2018 and by the summer of 2020, her curve was almost at 50 degrees. Due to the big jump in her curvature so quickly, her care team determined that surgery was the only answer. In August 2020, A. Noelle Larson, M.D. performed a seven-hour vertebral body tethering (VBT) surgery to correct the curvature of Alexis' scoliosis. She now has a metal tether and seven screws straightening her spine and is happy to report that her curve is down to approximately 25 degrees.

Alexis' advice to others is to EmBrace You and your scoliosis journey, "Be confident in the beautiful and unique way in which you were created. And know there are others like you who are walking with you along this path. Always know you are not alone."

For more information about EmBrace You, or brace bag pickup/mailing options, email or call: 701-226-8536.

Alexis' story with Shriners Children's Twin Cities began at a screening clinic in her hometown of Bismarck, North Dakota

Diagnosed with adolescent idiopathic scoliosis, Alexis and her family were thrilled to find that Shriners Children's Twin Cities offered her an individualized care plan all in one location, making it worth the seven hour drive from their home. 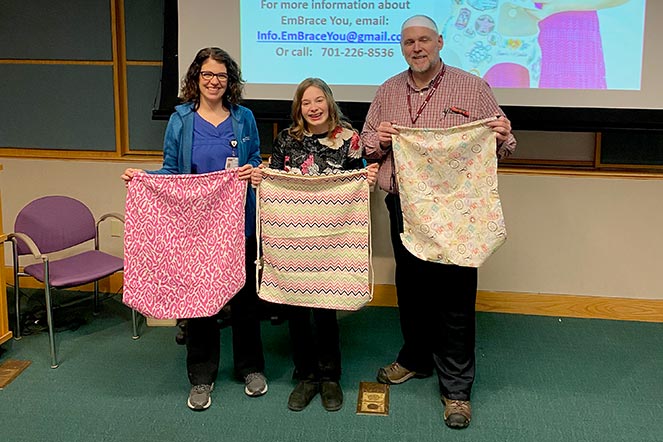 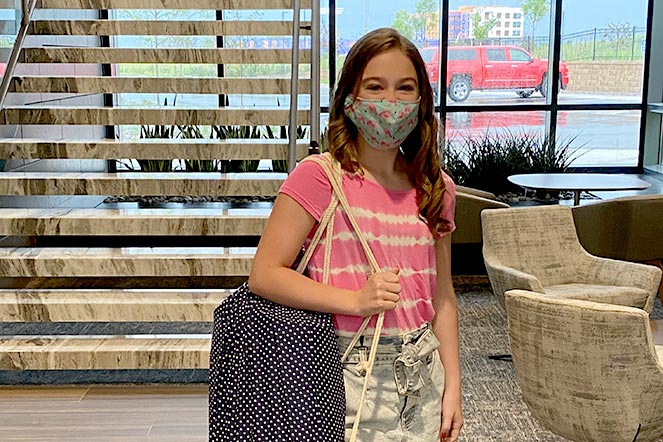 Alexis was the first patient to be cared for in the new Woodbury location of Shriners Children's Twin Cities on June 29, 2020. 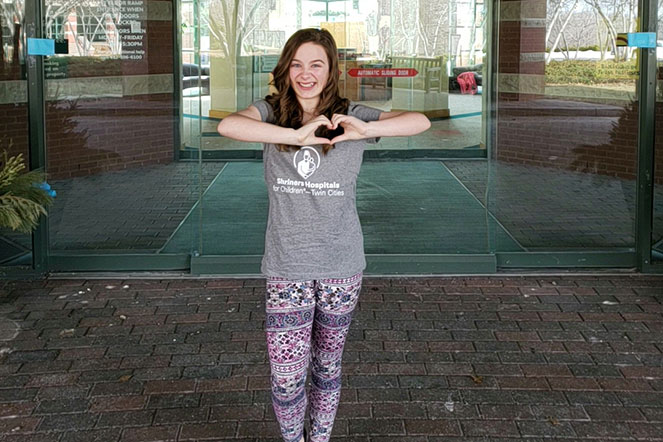 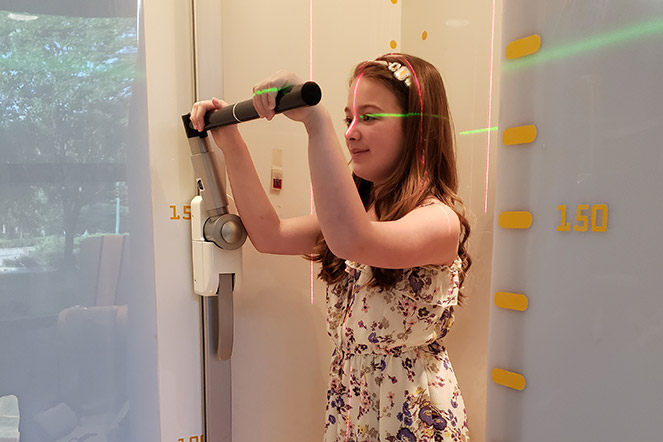 Alexis getting an X-ray in the low-dose radiation EOS Imaging System. 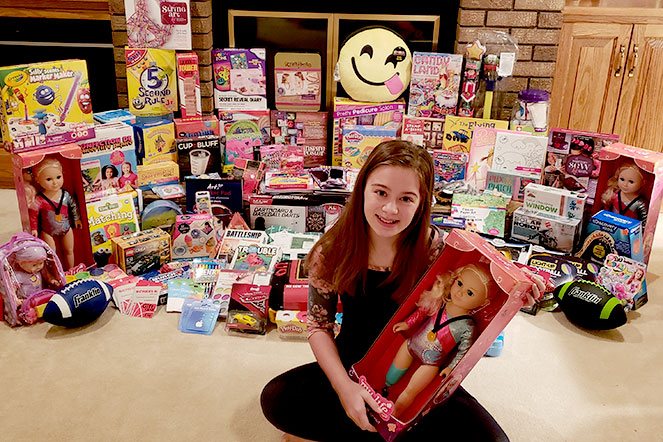 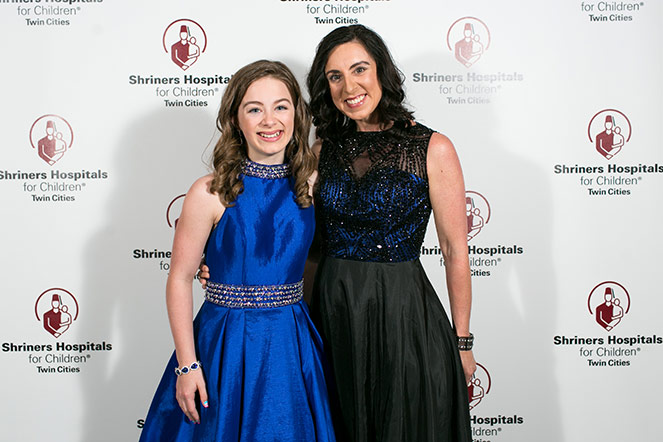 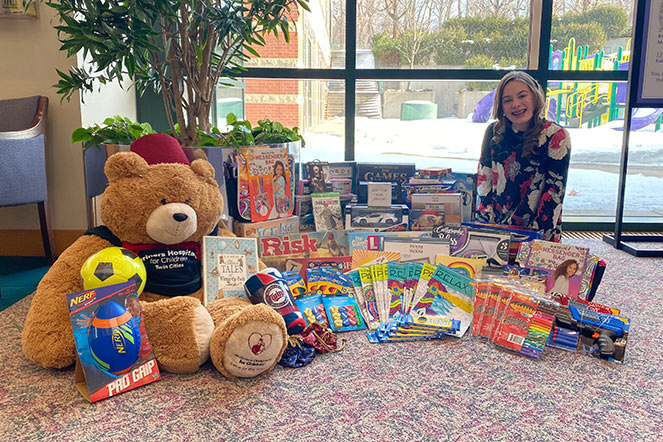 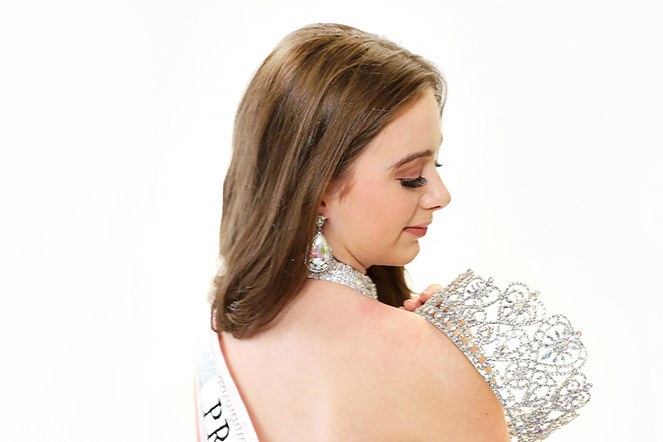 Princess of America Junior Ambassador 2020 — and proud of her VBT surgery scar.