When he was 18 months old, GianLuca was spending time with his grandfather, who had just made a cup of tea. GianLuca saw the tea, thought it was water, and reached for it. The hot liquid spilled all over his head, face and shoulders. Initially, his family did not realize how serious the burns were because GianLuca did not appear to be in any pain. Just to be safe, his mother, AnnaLisa, took him to their pediatrician’s office. Immediately recognizing the severity of the injury, the pediatrician directed the family to a local hospital emergency room. They in turn sent the family to the Boston Shriners Hospital.

GianLuca traveled by ambulance with his mother into Boston. While it was an incredibly stressful ride for her, she would later report to her husband, Greg, that GianLuca really enjoyed the sirens and the speed of the ambulance that brought them to the Boston Shriners Hospital. Greg explained that he and his wife did not know anything about Shriners Hospitals for Children at the time. They quickly learned a great deal and grew to appreciate the level of care and comfort provided to their son. They also discovered that they had connections to the Shriners network, including Greg’s primary care provider, who works at Massachusetts General Hospital and volunteers at the Boston Shriners Hospital.

The week after GianLuca’s injury was frightening for the family. GianLuca developed a high fever and irritated skin that Greg described as “red as a tomato.” The symptoms were the result of a delayed reaction to an infection GianLuca developed due to the burn. He was seen in the Boston Shriners Hospital’s outpatient clinic and returned home covered in bandages. At that point, Greg and AnnaLisa had to wait 48 hours to see if their son would need surgery, and were incredibly relieved when doctors ruled it out. The care team instead closely monitored GianLuca. “It was a hard time for us,” said Greg. GianLuca came in weekly for about a year, and then returned every few months for follow-up care.

At one point during an appointment, GianLuca’s doctor had to shave one side of his head to manage wound healing. “We have a cousin in the family who is a barber, and it was a little bit of comic relief for us watching a doctor only cut half of his hair. We had a good laugh,” said Greg. The family called their cousin and went to the barbershop so GianLuca could have the rest of his hair trimmed.

Greg described the Boston Shriners Hospital as a welcoming and calming place. In the eyes of young GianLuca, his regular visits were “fun!” When the family would return to the outpatient clinic, they saw children of all ages with burns ranging in severity. Greg said that the patients “...always were smiling. The resiliency of youth is just amazing.”

Now 8 years old, GianLuca is passionate about playing soccer and football. He also loves lacrosse, and recently tried out for his first team. An avid swimmer, he enjoys the beach but prefers to do most of his swimming in a pool.

As GianLuca has healed, the family wanted to give back in some way and help raise awareness about the Boston Shriners Hospital. Greg is now an Aleppo Shriner, a journey he started about a month after GianLuca was injured. A co-worker who is a Shriner helped guide Greg through the process. The family also collects can tabs, with donation sites set up at school and work. “People who know us just come up and hand us zip lock bags full of tabs,” Greg said.

The family also raises awareness of the care their son received at the Boston Shriners Hospital. Recognizing the power of social media, Greg regularly posts about his family’s experience. Every year on Shriners International Awareness Day, Greg does a workout and posts frequent updates. “Sometimes you touch somebody and maybe inspire them to support the hospital,” he said. He has been posting and sharing for seven years, with no plans to stop.

Greg shared that, despite being so young, GianLuca remembers his time at the Boston Shriners Hospital. He recognizes the Shriners Hospitals for Children logo when he sees it and tells his friends to save their can tabs for the hospital. “Our hope is that GianLuca carries his experience with him forever and continues to give back,” said Greg. 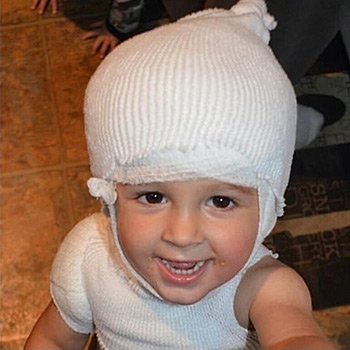 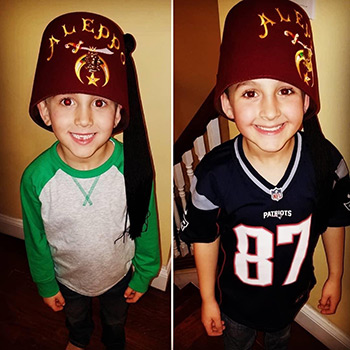