July is Cleft and Craniofacial Awareness Month, and we’re putting the spotlight on the wonderful outcomes for patients at Shriners Hospitals for Children — Boston.

From the day Sarah found out about her second pregnancy, she had an uneasy feeling that something was different from her first experience. A year earlier, Sarah and her husband, Gill, welcomed their first child, Gill Jr., into their lives. Despite having an almost identical pregnancy up until the 19-week ultrasound, Sarah’s initial uneasiness was justified.

Sarah’s 19-week ultrasound was booked for November 21, 2018, a day after Gill’s first birthday and the day before Thanksgiving. When the ultrasound technician said that everything looked fine, Sarah burst into tears of joy. However, when the doctor arrived to talk with the couple, those tears of joy turned into fear and uncertainty. A cleft lip and palate was the diagnosis.

Despite the couple’s wish to keep the gender of their second baby a secret, after undergoing genetic testing it became inevitable to learn they were having a son. Right away, the couple knew that this little boy needed a special name. They decided on Beau, the French word for handsome. “We knew right away there was no better name,” Sarah said.

The first time Sarah saw Beau was when Gill shared a picture of their newborn son that was taken with his phone. In April, Beau was born via cesarean section at Mass General Hospital (MGH). Although Beau was not premature, he was born with respiratory issues and coded only minutes after delivery. Once Beau was stable, the family took him home and larger concerns arose as he failed to thrive. He was not gaining weight, was frequently vomiting, and with his cleft, the vomit was forcefully going through his nasal cavity. Beau cried in pain for 22 hours a day, which eventually led to an umbilical hernia.

Sarah and Gill would lie awake at night, just making sure that their son was still breathing. They knew something else was wrong. The couple turned to MGH and Shriners Hospitals for Children — Boston. After months of extensive testing, the worried parents finally had answers. Because of his cleft, Beau was swallowing air, which made him vomit and have constant gas pain.

The family met with Eric C. Liao, M.D., Ph.D., co-director of the Cleft and Craniofacial Center, a collaboration between Shriners Hospitals for Children — Boston and Mass General Hospital for Children, even before Beau was born. They immediately knew they had found the right place to treat their son. Not only did Dr. Liao keep in touch with the family, but he also communicated with Beau’s other providers to develop a treatment plan that was right for the baby. In September, Beau's first reconstructive surgery and g-tube placement were performed by Dr. Liao. This past March, Beau received his second and third surgeries, which included a lip and nose revision, and palate surgery.

“Dr. Liao is warm, empathetic, supportive and extremely intelligent,” Sarah said. “He has a way about him that makes you feel like you've known him or he's been a friend of yours for years.”

Now 14 months old, Beau has surpassed many goals. “He is eating us out of house and home, sometimes eating more than his 2-year-old brother, Gill,” said Sarah. Furthermore, although Beau was not predicted to begin walking until at least 18 months old due to his failure to thrive and poor weight gain, he recently took his first steps on Father's Day. Beau continues to grow and exceed the expectations of his doctors and parents.

In honor of Beau and how far he has come, Sarah was planning to run the Boston Marathon this spring. While the marathon has been canceled due to COVID-19, she plans to run those 26.2 miles on September 13. She will be wearing her home-made hot pink cleft awareness ribbons called #bows4Beau, and has mapped a route that passes both MGH and Shriners Hospitals for Children — Boston.

“It's scary to be a parent, but being a parent to a child where there are so many unknowns... that's a whole different ballgame,” said Sarah. “I had started to think that I was the problem because nobody really heard me… but Shriners [Hospitals] always did. I truly cannot say enough about Dr. Liao and his team. He has given Beau a new life. He saved Beau, he saved my family and he saved me.” 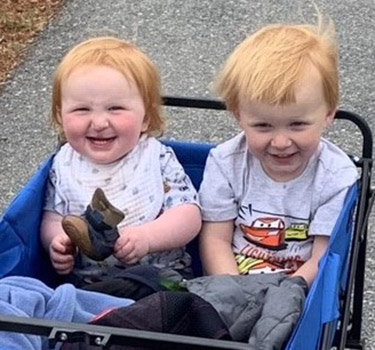 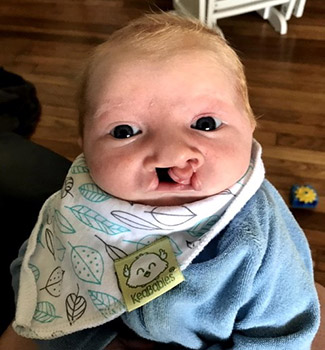