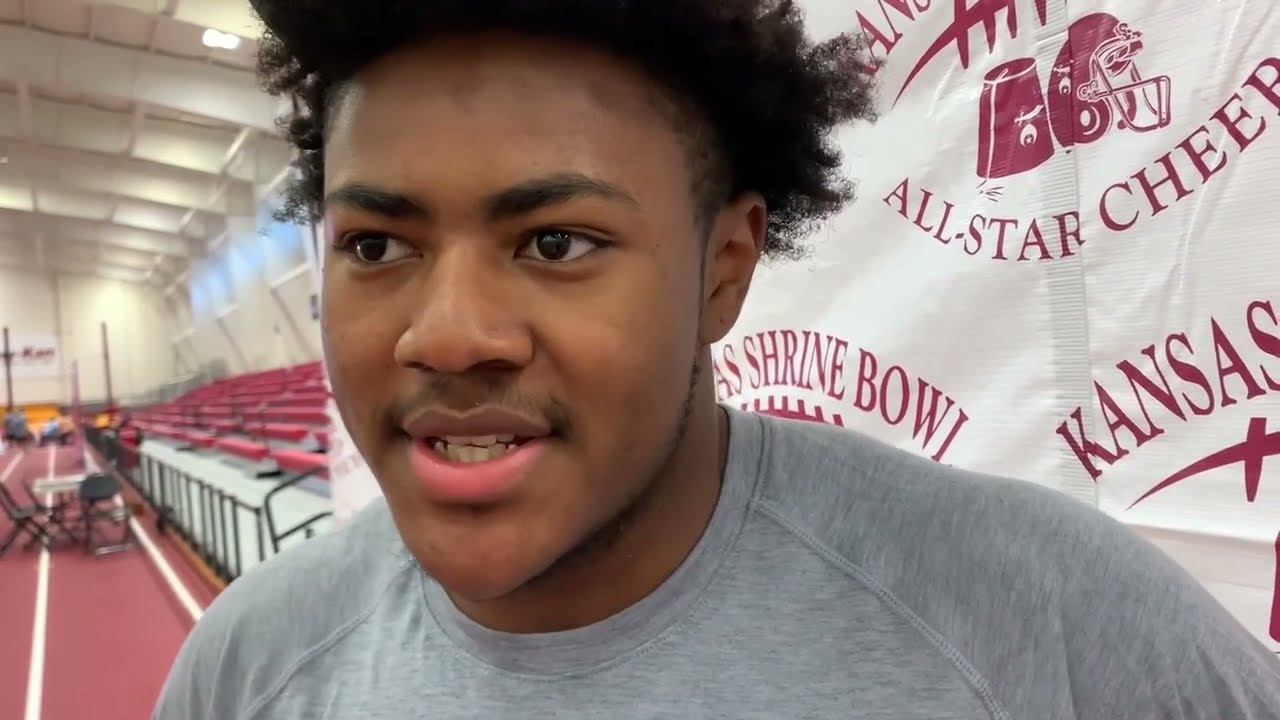 Kansas Shrine Bowl Proves to be More Than a Game

The Kansas Shrine Bowl Hospital Experience expanded minds and moved hearts. We are so thankful for to our passionate patient ambassadors who led this important charge at Pittsburg State University. Let's say it together: ALL ABILITIES ARE AWESOME!
View Transcript

Basically you put on oven mitts and then take the [inaudible 00:00:04] and you try to unscrew it and then put back on.

Welcome to the Kansas Shrine Bowl.

When he was born I didn't know he was going to be born that way. And I wondered if maybe he'd even be able to write, hold a pencil. He has an AB average in school. Does well. Now he plays competitive baseball.

He does not have the fibula bone in his left leg. And the one in his right leg is very short.

I might struggle with some things here and there, especially in sports, but it does not compare to things that these guys have to go through every single day.

People with disabilities can do things the same or even better with people that don't have disabilities.

They understand what [inaudible 00:01:31] all about. It's really for the kids and they get to interact with the kids, which is really special.

Old McDonald had a bank...

Those guys, they put all their energy into something already without a full grasp probably of why they're doing it. And this is the why. This puts the why in our game. Really, you see that light bulb kick on for these guys and they recognize that this is bigger than themselves. And for some of these guys, it might be the first time they've done something like that, bigger than themselves, and for somebody else. And I've always thought that's one of the coolest things about our event is that it's win or lose it's for the kids.

That yes, she's different, but even though that she's different doesn't mean that she can't do anything that you can. We can do the same things as you guys can.

Some people call it fall, some call it autumn. At Shriners Children’s, we call it football season. That faint chill in the air is ushering in more than just tailgating, cheering stadiums and end zone celebration dances. Thousands of high school seniors across the nation are lacing up their cleats on their final year of high school football — a year that will determine whether or not they make their local Shrine Bowl All-star team. Players would tell you every game counts, but arguably, those who get to play for the kids at Shriners Children’s will tell you it’s the most meaningful game of their lives.

Shriners Children’s is known for its well-publicized East West Shrine Bowl, 98 years strong, with players from all across the nation taking part in the annual televised game. What’s lesser known are the many high school all-star football games scattered throughout the U.S., all supporting specific Shriners Children’s locations.

Let’s take a closer look at a few of these time-honored Shrine Bowls in the east, central and west regions of the country.

The Shrine Maple Sugar Bowl, played at Castleton University in Vermont, brings together young athletes, patient ambassadors, Shriners and the entire community to support the specialty pediatric care provided at Shriners Children’s locations in Boston and Springfield, Massachusetts and Montreal, Canada. All three facilities were represented at this year’s event, with patient ambassadors Mason, Giavanna and Jenson participating in the festivities.

The Shrine Maple Sugar Bowl has raised nearly $5 million since it began in Nashua, New Hampshire in 1954. Being named to the roster is a tremendous honor that many players dream of from the time they are young. “Representing their state while supporting the mission of Shriners Children’s makes this a unique and memorable experience for our players,” said Mt. Sinai Shriner Kristi Morris, general chairman of the Shrine Maple Sugar Bowl since 2014. “Hearing the stories of hope and healing from our patient ambassadors reminds us all of the importance of this annual tradition.”

All proceeds equally support patients at the Springfield, Boston and Montreal facilities. The tradition will continue in 2023, as the Shrine Maple Sugar Bowl celebrates a very special 70th anniversary milestone.

The Shriners Children’s Twin Cities location uniquely supports three Shrine Bowls in their service area: Iowa (started in 1973), Nebraska (started in 1959) and North Dakota (started in 1974). While the geography may be different, the facility’s goal for each game is the same; to give the football players, cheerleaders and coaches an understanding of what is it like to be a patient at Shriners Children’s. Local patient ambassadors from each area spend the day sharing their care story, talking about different departments, and challenging the players to activities related to their physical challenges. A couple of favorite activities include challenging the players to tie their shoes with one hand and having them use a prosthetic arm to move building blocks. The competition is rowdy, but so is the fun.

“It’s always great to get a different perspective on life and what others have to deal with and just how blessed we are to be able to play the game,” recalled Nebraska Shrine Bowl South team’s Tyson Denkert. After spending the afternoon playing yard games against Nick, who was born with no hands yet was the champion at Jenga, Tyson realized, “we’re not very different at all.”

Between the music rehearsals, stunt practices and running plays, Pittsburg State University was a very busy place the third week of July. It was host to the Kansas Shrine Bowl. In total, this year’s event welcomed 77 football players, 185 cheerleaders and 149 marching band performers – all elite members of their high school teams, squads and bands.

Beyond the big game itself, each participant looks forward to the Kansas Shrine Bowl Hospital Experience. The chance to meet patients is similar to the Twin Cities’ program, where participants get a chance to understand the mission behind the effort. This year, 14 patient ambassadors joined the charge. Over the course of two days, they helped the participants “step into someone else’s shoes” to better understand that ‘all abilities are awesome.’ The activities included using prosthetic legs and arms, challenging their balance and posture, using a wheelchair, attempting tasks without the use of all of their fingers, etc. To say it simply: fun was at the forefront but everyone walked away with a new perspective.

Kansas Shrine Bowl director, B.J. Harris, comments on the impact the hospital experience has on the players. “This puts the ‘why’ in our game. You see that lightbulb kick on for these guys. They recognize this is bigger than themselves. For some of these guys, this might be the first time they’ve done something like that – something bigger than themselves and for someone else. I’ve always thought that’s one of the coolest things about our event is: win or lose, it’s for the kids.”

Since its inception in 1974, the Kansas Shrine Bowl has brought $3.5 million to Shriners Children’s St. Louis. Next year will mark the 50th game and you can bet big celebrations are in the works!

Since the first Wyoming Shrine Bowl game in 1974, the players, coaches, cheerleaders and event organizers have traveled the roughly 800 miles roundtrip between Casper and Salt Lake City by bus to learn more about the charity they are playing for. The hospital experience aims to set the right tone for the week. Amidst all the hustle and bustle of bonding with a new team in a matter of days, physically demanding practices, and recognition banquets, event organizers want the players to walk away with a life-changing experience, not just another win.

“The highlight of the week is the trip that the participants make to the hospital to visit the patients and physically see what the Shrine organization does,” said Frank Selby, Wyoming Shrine Bowl executive director. “The week’s activities are at no cost to the participants and the profits of the game are sent to Shriners Children’s Salt Lake City to benefit the patients.”

The hospital experience for Wyoming Shrine Bowl participants includes interaction with patient ambassadors – children who receive care at the hospital and who want to help share their story to bring awareness and resources back to the hospital they love. The patient ambassadors helped the players better understand their conditions through interactive activities focusing on adaptive sports, occupational therapy, prosthetics and and orthotics, and surgical services.

Thanks to fundraisers like these Shrine Bowls, Shriners Children's is able to provide medical care to children up to age 18 who can benefit from the specialized services available.

Inspired to do your part to help change a child’s life? Go to lovetotherescue.org where fundraising is made easy. It only takes a minute to set up a campaign. Choose the Shriners Children’s location you’d like to fundraise for. Decide on what to fundraiser for. Pick a name. Pick a photo. And BAM! Just like that, TOUCHDOWN! You’ll be ready to start raising money for the organization you love.