A celebration took place at a Northern California elementary school in honor of fourth-grade school teacher, Ms. Sutherd, whose class raised $50,000 for the Northern California Shriners Hospital – a fundraiser organized by her students that will support specialty pediatric care.

Ms. Sutherd found herself in a slimy situation as she upheld her end of the fundraising promise and braved an enthusiastic sliming from her students. She sat on a chair in a kiddy pool outside her classroom as full buckets of slime covered her head and students laughed and cheered. Ms. Sutherd cringed as slime slid down her face, then smiled, knowing she had successfully taught her students an important lesson about giving back during the pandemic.

“I never actually thought I would be slimed,” said Sutherd. “I still can’t believe these kids collected $50,000 from all over the world. These kids are absolutely incredible.”

It all started earlier this year when Ms. Sutherd started to gain an impressive following on TikTok after creating a few TikTok challenge videos assigned to her by her students.

“I quickly realized I could use this social media following as an opportunity to teach my students a lesson about giving back and supporting our community,” said Sutherd. “After all, this was something we built together – their creativity.”

With community service in mind, her students came up with another TikTok challenge, which involved getting shout-outs from a few celebrities, including professional skateboarder Tony Hawk. Students agreed that if her video were to complete the challenge, they would give all their hard-earned classroom “ticket money” to Ms. Sutherd, who would turn it into real money and donate $1,000 to a charity of the students’ choice.

She presented a few different nonprofits the students could donate to, and in the spirit of her students wanting to help other kids, they chose Shriners Hospitals for Children — Northern California.

A day into the challenge, the TikTok video went viral with over 1.5 million likes in addition to thousands of shares and comments. Tony Hawk responded to the TikTok video with a video of his own, agreeing to match their donation of $1,000. With the TikTok challenge complete in under a day and unprecedented social engagement, students were motivated to do more. They increased their fundraising goal to $50,000, and Ms. Sutherd promised to let students slime her if they reached it.

Donations continued to pour in from around the world, and with an unexpected and extremely generous donation of $20,230 from the Saladin Shriners in Grand Rapids, Michigan, the students achieved their fundraising goal. The message on the importance of giving was quickly spreading across the nation.

“This last year has been hard for students,” said Jonathan Duley, the Shriner who came across Ms. Sutherd’s video on TikTok and initiated the $20,230 donation. “When I saw what Ms. Sutherd's class was trying to do for Shriners Hospitals for Children, I felt compelled to get involved. Being a Shriner myself, this was even more important to me. The officers of Saladin Shriners in West Michigan got together and decided that there was no other option but to make sure these students met their goal so they could be a part of something much larger than themselves.”

The global pandemic and teaching from home didn’t stop Ms. Sutherd from educating her students about giving back. It just took a little creativity and the power of social media. Their donation to the Northern California Shriners Hospital will help make the impossible possible for children needing specialty pediatric care.

“This is a beautiful example of kids helping kids in our community and how everyone has the power to make a difference, even in these difficult times. Every dollar that’s donated to our hospital, directly supports patient care,” said Alan Anderson, director of development at Shriners Hospitals for Children — Northern California. “This is one of the largest donations we’ve seen come to our hospital this year, and to think it came from a group of fourth-graders, is truly remarkable. It really goes to show that kids can do anything and make a positive impact in this world.” 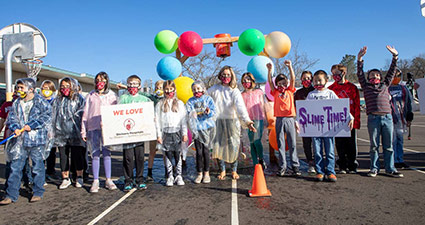