The annual Walk for LOVE at Shriners Hospitals for Children — Salt Lake City is a tradition for many people who love and support the hospital. When the 2020 Walk went virtual, it caused many to get creative. Hospital animal volunteers Zee and Molly and their owners were no exception. They were committed to creating a Walk for LOVE to remember.

Mitzi and Craig Dunford have been bringing Zee to the hospital, offering volunteer animal therapy for over a year. Craig noticed how well his mother’s retirement community received Zee when they visited, so he decided to apply to the volunteer program at Shriners Hospitals for Children — Salt Lake City. Mitzi’s father had been an engineer at the hospital and a volunteer. “He always said he got more from his service than he gave,” said Craig. “We totally know that now. We were so thrilled to be accepted as volunteers.”

When the pandemic hit early this year, the volunteer program was closed to limit traffic in the hospital. This included animal volunteers. It’s been tough for the Dunfords to miss their regular visits to the hospital with Zee, but they were thrilled to be able to participate in the Walk for LOVE. In fact, they were one of the top fundraising teams and were named a Champion for LOVE. “We were fortunate to have many family members and friends support this great cause,” said Craig. “I think our success came from telling everyone about our experiences at Shriners [Hospital]. I want to especially thank my sister Jayne for her support.” From their regular visits to the hospital, they have been incredibly moved. “Witnessing young people experiencing unimaginable pain, but having many caring people to repair and support them, is astounding,” said Craig. “We feel fortunate to be a small part of that. Quite honestly, it is very far out of my comfort zone to do something like this Walk. But thanks to Shriners, Zee, and the support of our family and friends, we did it!”

Zee herself is a miracle dog. The breeder almost threw her away with the afterbirth. As she was about to close the garbage bag, she saw a small white paw sticking out. Quickly realizing it was one more pup, she pulled her out, proceeded to breathe life into her, and watched her come to life. A few weeks later she told Mitzi, who had been her therapist, about the pup. “I knew this dog should belong to you,” she said. “You saved my life, I saved this life. She’s yours.”

The Dunfords were joined on their walk by fellow animal volunteers, Molly and her owner, José (pronounced J-oh-see). “Molly is a 7-year-old Goldendoodle who loves everyone, especially children,” said José. “Her special bond with children makes her an ideal therapy dog for the Shriners Hospital. The children love her and for those who are a little timid, her gentleness helps overcome any fear they may have. She loves to snuggle in bed when invited and is also a great motivator for children in physical therapy.”

José has been involved in animal-assisted therapy for 27 years. Her husband is a Shriner and she’s a Daughter of the Nile, so when the Salt Lake City Shriners Hospital started the animal therapy program, it seemed an obvious step to start bringing her dogs.

“We've been participating in the Walk for LOVE at the hospital for several years, but of course this was a year like no other,” said José. “So when Craig, our newest and perhaps most enthusiastic pet partner, asked me to join him in Sugarhouse Park for a Walk, how could I refuse?” The Dunfords, José and their dogs walked in the park with their hand-made sign, which drew attention from other park-goes who asked questions about the cause they were supporting.

“It's always a pleasure to be at Shriners Hospital,” said José. “We love the staff and they love Molly! I have made many friends there over the years. The Daughters of the Nile's major philanthropy is Shriners Hospitals for Children. I feel fortunate that I am able to contribute to the children in more than one way.” 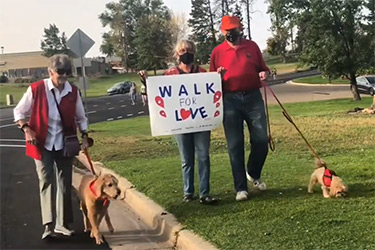 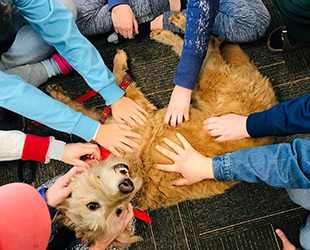