The strength of the Shriners Hospitals for Children health care system

Maxim was 13 months old when he and his family took part in a large study on arthrogryposis multiplex congenita (AMC). The study was conducted at four institutions within the Shriners Hospitals for Children health care system (Canada, Northern California, Philadelphia and Portland), and was led by Reggie Hamdy, M.D., Frank Rauch, M.D., and Noémi Dahan-Oliel, M.D., from Shriners Hospitals for Children —Canada. Among the 300 participants, Maxim’s family is particularly valuable and interesting from a scientific perspective, as there have been several cases of AMC in the family over the generations.

“At the beginning of my pregnancy, doctors noticed that Maxim’s fingers didn’t open. At the time we were living in Calgary. The doctor at the clinic did more in-depth ultrasounds which revealed that both of the baby’s feet weren’t developing normally either. His feeling was that we were looking at a distal arthrogryposis,” said Carol-anne, Maxim’s mother. Carol-anne couldn’t help but think of her husband, who has had surgery on both his legs, but has never been diagnosed with arthrogryposis. Then there’s her father-in-law, who was finally diagnosed with arthrogryposis after living most of his life with problems in his hands and feet. The family felt that they were most likely dealing with a hereditary disease.

However, before jumping to conclusions, an amniocentesis was performed. Genetic testing using a sample from the amniocentesis revealed that Maxim and his father have a similar genetic variation in their DNA. This time there’s no doubt: It’s arthrogryposis. Three months after Maxim’s birth, the family moved to Montreal. Maxim’s files were transferred to Shriners Hospital for Children — Canada, where the family knew they’d be in good hands.

“My baby was in casts for the first 10 months of his life until he had surgery on his talus bone. The casts helped correct his foot positioning and he wore them until he healed. The results were great! Now I can see my baby’s toes! The service we received at Shriners [Hospitals] was outstanding," said Carol-anne. "Nancy, our physiotherapist, and Nathalie, our occupational therapist, taught us stretching exercises for hands and feet. During COVID, we had follow-up appointments online because sometimes Maxim would fall over and then try to sit up – only to fall over again. The physios made us a short video to show us how to strengthen his feet. The support from the Shriners [Hospitals staff members] was excellent."

"Because of Maxim’s casts, the car seats have to be wider and we use lots of pillows to help us adapt spaces to accommodate his needs. William, my eldest, is 5. He understands what’s going on with his brother and often helps me with Maxim’s finger therapy. It’s a nice quiet family moment," said Carol Anne. "Maxim is luckier than his grandfather, who never received a real diagnosis but instead was told by his doctor, 'You’d better be smart because you’ll never be an athlete.' His grandfather became a lawyer. He worked so hard on his hands that he’s able to play the saxophone and the piano, but when he’s at rest his hands are closed. He had an extremely difficult childhood in school and people weren’t very nice. Our generation has support. Maxim will be followed until he’s 18 because arthrogryposis tends to reoccur as a child grows. It’s like we’re part of a big family.”

When we take a closer look at Carole-anne’s family tree, the picture is clear: Maxim’s great-grandfather had two sons, and one of them had arthrogryposis (Maxim’s grandfather). His grandfather also had two boys, and one (Maxim’s dad) also had arthrogryposis. Lastly, Maxim’s father has two boys of his own and one of them has arthrogryposis. But what about the other son? So far, it seems that William hasn’t inherited the disease, even though he had one foot that pointed up and two toes that were stuck together. The casts he wore when he was 3 months old seem to have rectified the situation, and 5-year-old William walks and runs with ease.

“We’re going to continue to dig deeper during our research,” said Dr. Noémi Dahan-Oliel. “Maxim’s family is taking part in the research’s genetic component, which consists of whole genome sequencing for Maxim and the other members of his family. The results from the genome sequencing can be used to build a more comprehensive clinical table of the patient’s condition, thereby contributing to the advancement of personalized medicine, which is very promising for arthrogryposis.”

Arthrogryposis multiplex congenita is clinically defined as congenital joint contracture in two or more areas of the body. AMC affects approximately one in 3,000 people. Babies who can’t move around in utero sometimes develop this rare disease.

“AMC is a rare disease on which there is little scientific data. My family is very happy to take part in the Shriners’ [Hospitals] research project. Even though Maxim’s case is considered to be a mild one (his spine is fine, he can bend his arms and legs and has even started to crawl), we want to help ourselves and others because, who knows? Maybe they’ll have found a cure by the time Maxim is an adult, or at least have made some medical advances. That’s my wish,” said Carol-anne. 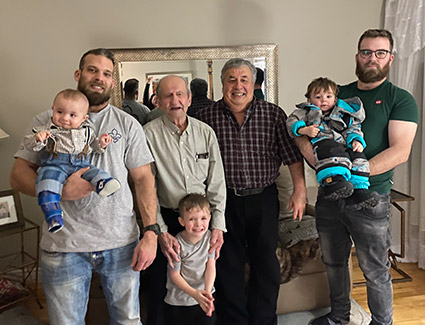 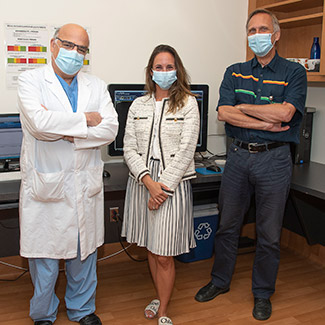