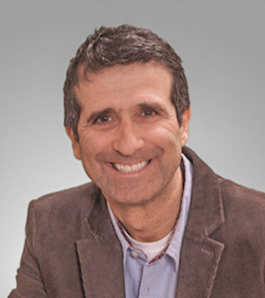 Thierry Benaroch, M.S., M.D., FRCS(C), realized his love for orthopedics when he was first exposed to musculoskeletal anatomy and was intrigued by the biomechanics of the locomotor system. During his orthopedic residency at McGill University, he was attracted to pediatrics because of its diversity and the fact that correcting deformity at an early age can prevent adult pathology. His fellowships at Hospital Ste. Justine in Montreal, Texas Scottish Rite Hospital in Dallas, and a four-month stint at Boston Children's Hospital reinforced his love for pediatric orthopedics and solidified his desire to pursue the rest of his career in that field.

He and his parents immigrated from Morocco when he was 4 years-old and have lived in Montreal ever since. When he was given the opportunity to return to Montreal to work at the Montreal Children's Hospital and Shriners Children's Canada, it was a very easy decision for him to come back home. He has now been associated with Shriners Children's for 27 years and has loved every minute of it.

Academically, Dr. Benaroch has been the site director for the Montreal Children's Hospital for the last 20 years, program director for McGill University Orthopedic Surgery Residency Program for the last eight years, and more recently, appointed chief of staff of Shriners Children's Canada. He is very excited to undertake this new challenge and is looking forward to giving back to Shriners Children's what they have done for him and his patients. He has found a niche in clubfeet, foot deformities, DDH and cerebral palsy. Dr. Benaroch loves going to work and looks forward to going to his "second home" every day.

After Dr. Benaroch's passion for his family and his work, biking has also played an important role in his life. He owes this passion to his fellowship director who introduced him to cycling in 1992. He cycles close to 20,000 km a year and finds it refreshing and energizing. It makes him happy and this happiness translates to his constant good mood which those around him feel. The mood in his clinics and operating rooms is stress-free. Top patient care and education are the themes of his work environment.