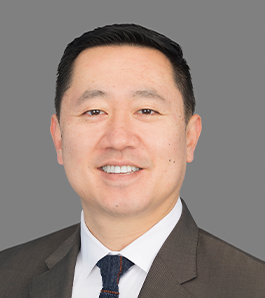 Robert H. Cho, M.D., is a pediatric orthopedic surgeon and chief of staff of Shriners Children's Southern California, and clinical assistant professor of orthopedic surgery at UCLA. He graduated from Cornell University with honors in 2000 with a degree in chemistry, and minors in biochemistry and near Eastern studies. He went to medical school and residency at Drexel University College of Medicine in Philadelphia, Pennsylvania. During his residency, he rotated at Shriners Children's Philadelphia where he developed his passion for treating children with neuromuscular and orthopedic disorders.

He completed his fellowship in 2010 in pediatric orthopedics and scoliosis at Rady Children's Hospital San Diego. Dr. Cho then took on a staff position at Shriners Children's Southern California as a pediatric orthopedic surgeon with subspecialty in scoliosis and spinal surgery. Since that time, he has become fully integrated into the mission of providing world class orthopedic care to children from all walks of life throughout the Southwestern United States and internationally.

Dr. Cho became the chief of staff of Shriners Children's Southern California and helped to orchestrate its move to its new home in Pasadena. Dr. Cho has presented papers, posters and presentations all over the United States as well as internationally including in Switzerland, France, Mexico, Japan and China.

As a social media expert, Dr. Cho was invited to give the inaugural symposium at the 2015 American Academy of Orthopedic Surgeons meeting on Orthopedic Surgery in the Digital Age: Using Social Media and the Internet to Improve Patient Care and Grow Your Practice.

He is also involved in healthcare advocacy – he was an invited member to the National Orthopedic Leadership Conference in Washington D.C. to discuss the state of healthcare and orthopedic surgery with the United States Congress. He recently served on the board of directors of the Pediatric Orthopaedic Society of North America as the communications council chair. He serves on the Physician Executive Council for the Shriners Children's healthcare network.

Dr. Cho believes that every child deserves individualized care, regardless of their medical challenge. Innovation is key to his practice; he is the only surgeon in the Los Angeles area that performs Anterior Vertebral Body Tethering for children with adolescent idiopathic scoliosis. He has also helped to design many implants and instruments to help children with scoliosis and spinal deformity. Under his leadership, Shriners Children's Southern California has become a world leader in decreasing pain in surgical patients by developing a novel preoperative pain protocol that minimizes the use of narcotics.

Dr. Cho lives in Los Angeles with his wife and two beautiful daughters. He enjoys playing the guitar, smoking meats, playing video games with his children, dining out and traveling.