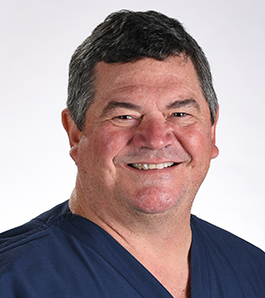 J. Michael Wattenbarger, M.D., is a board-certified pediatric orthopedic surgeon who has served as chief of staff at Shriners Children's Greenville in South Carolina since February, 2015.

Dr. Wattenbarger initially pursued a career as a petroleum engineer, following the footsteps of his father and grandfather. He enjoyed engineering, but soon realized that he wanted a career where there was more immediate impact on people's lives. He made the decision to pursue a career in medicine.

Dr. Wattenbarger's research interests include basic science work on physeal fractures and the formation of physeal bars. He received a POSNA grant for work in this area and has published numerous papers on the topic. He also has a strong interest in clinical research in scoliosis of children and adolescents,

Dr. Wattenbarger's special interests are in pediatric scoliosis and spinal reconstructive surgery. He has performed over 1,500 spine surgeries across his more than 25-year career in pediatric orthopedics. He also practices general pediatric orthopedics including cerebral palsy, clubfoot, myelomeningocele, skeletal dysplasia and other congenital deformities. Before his arrival at Shriners Children's Greenville, Dr. Wattenbarger was included in Charlotte Business Magazine's Top Doctors list consecutively from 2008-2013.

Dr. Wattenbarger is passionate about the mission of Shriners Children's and feels lucky to be able to practice in such a special place.