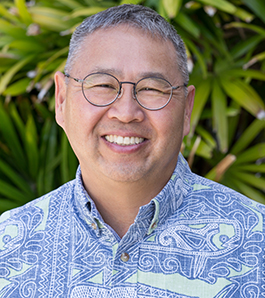 Craig M. Ono, M.D., FACS, FAAOS, FAOA, FAAP was born in Albuquerque, New Mexico, the son of a career Army officer. He finished high school in Indianapolis, Indiana, and went to Northwestern University for a chemical and biomedical engineering degree. He obtained his medical degree at Northwestern University Medical School. He joined the United States Army as a medical student as a way of paying for school. He completed his internship and orthopedic surgery residency at Tripler Army Medical Center, Honolulu, Hawaii, with duty at Fort Campbell, Kentucky, and in Saudi Arabia for Operation Desert Shield and Storm. He completed the pediatric orthopedics fellowship at the Shriners Children's Hawaii. He then completed Army duty assignments at Tripler Army Medical Center, the 121st General Hospital and the 2nd Infantry Division in the Republic of Korea, Madigan Army Medical Center in Tacoma, Washington, and with a Forward Surgical Team in the Republic of Macedonia. He returned to Shriners Children's in 2000 and felt fortunate to have the opportunity to have two parallel careers as a pediatric orthopedic surgeon and as an officer in the United States Army Reserve.

As a surgeon at Shriners Children's, he enjoys caring for wonderful children and their families from throughout the state of Hawaii and the south and western Pacific islands. He is part of a team that does an amazing job providing the highest-quality of care for a broad range of musculoskeletal problems. He is part of a team involved in developing high quality physicians and surgeons. He teaches medical students from the John A. Burns School of Medicine and orthopedic surgery residents from Tripler Army Medical Center and the University of Hawaii. He is part of a team that is academically rigorous with cutting-edge research and presentations for continuing medical education courses.

As a military officer in the US Army Reserve, he served as chief of professional services and then commander of the 1984th US Army Hospital. He served as command surgeon and then chief of staff for the 9th Mission Support Command. He served one combat tour in Iraq and two combat tours in Afghanistan as an orthopedic surgeon for forward surgical teams.

Dr. Ono was attracted to orthopedic surgery first because of the physical nature of the practice. He stayed because of the patients, families, practice partners and mentors. Dr. Paul Meyer at Northwestern University showed him the compassion needed to be a spine surgeon to those who have had catastrophic spinal cord injuries. He was the ultimate surgeon, physician, scholar and gentleman. Dr. Kent Reinker at Tripler and Shriners Children's demanded rigorous academics through reading and research. Dr. Richard Haynes at Tripler and Shriners Children's provided Dr. Ono a well-respected model for quality leadership.

His wife, three daughters, and a few dogs, keep him grounded and well cared for. He enjoys music, and he has a drum practice pad, a conga, and bongos in his office and two drum sets at home. He fishes, and he has a set of travel rods for use as he travels around the south and western Pacific islands for Shriners Children's. He also watches Korean dramas and anime, an obsession passed on to him by his mother and further encouraged by his daughters.