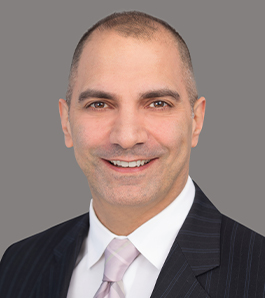 Andre Panossian, M.D., is a board-certified craniofacial and plastic surgeon who has devoted his career to pediatric plastic surgery. He has performed over 4,000 surgeries on children afflicted with facial paralysis, ear deformities, cleft lip and palate, large birthmarks, burns, vascular anomalies and congenital hand disorders.

Dr. Panossian completed medical school in 2000 at the top of his class at Tufts University School of Medicine in Boston. While in Boston, he pursued scientific research in tissue engineering at Massachusetts General Hospital (Harvard Medical School). During four years of research, Dr. Panossian helped develop some of the current concepts that are used today in cartilage and bone engineering.

Dr. Panossian went on to complete his plastic surgery residency at the University of Southern California, followed by advanced training in pediatric plastic surgery and facial paralysis reconstruction at the world-renowned Hospital for Sick Children in Toronto, Canada. Dedicated to the reconstructive care of children, Dr. Panossian then went on to complete further sub-specialization in congenital hand deformities and vascular anomalies at Boston Children's Hospital.

Having chosen a career in pediatric plastic surgery, Dr. Panossian further enhanced his approach to achieving natural, dynamic results by training in Caen, France. There, he adopted and refined the lengthening temporalis myoplasty for facial paralysis reconstruction. His work has received a Best of the Best Paper Award from the Plastic and Reconstructive Surgery Journal and the American Society of Plastic Surgeons.

After completing his training, Dr. Panossian returned to Southern California to join the division of plastic & maxillofacial surgery at Children's Hospital Los Angeles, where he founded and served as the director of the Facial Paralysis Center.

Dr. Panossian is now in private practice in Pasadena, California. He is also on staff at Shriners Children's Pasadena, where he performs ear reconstructions as well as treating children with burns.

In his spare time, Dr. Panossian volunteers regularly with Operation Smile and serves as a board member for Mending Kids and the Gondobay Manga Foundation.

Specialties and Areas of Care