2022 Rose Parade Float: About Our Float and Float Riders

Children often have big dreams for their future – dreams of what they want to become, and what they would like to accomplish. Often, children with medical issues or disabling conditions may be encouraged to scale back those dreams, or even abandon them entirely, and settle for something much smaller. However, at Shriners Children's we believe in dreams and limitless possibilities. We take the time to truly listen to our patients and families, and acknowledge their goals and dreams as we create their personal plan for care and treatment.

Our Rose Parade float, Celebrating 100 Years of Believing in Dreams, will honor this philosophy and the difference it has made in the lives of the more than 1.5 million children since our first hospital opened in 1922. Watch the parade on New Year’s Day to see our celebration of Shriners Hospitals for Children depicted in the beautiful language of flowers. Our National Patient Ambassadors Sydney, Seth, Connor and Mia will join our mascot, Fezzy, and other honored guests on our float at the traditional parade in Pasadena, California.

How to Watch the Parade

How/Why Our Theme Was Chosen

Our entry, Celebrating 100 Years of Believing in Dreams, honors Shriners Children's century of providing quality care to children with complex medical conditions, regardless of the ability to pay or insurance status. Equally, the theme recognizes the power of hopes and dreams, and celebrates our patients' resilience and determination as they discover how much is possible, begin to believe in their dreams and gain the confidence to achieve their goals. Helping our patients discover how much they can accomplish has been a hallmark of the philosophy of Shriners Children's throughout its history. We look forward to a second century of transforming the lives of children.

How Our Float's Theme Relates to the Parade Theme

The 2022 Tournament of Roses Parade's theme of Dream. Believe. Achieve. can be seen throughout our float. Aspects of our theme, Celebrating 100 Years of Believing in Dreams, emphasize the parade theme. Our float illustrates the power of dreams, even in the face of adversity, as our patients learn to believe in those big dreams – including becoming a ballerina despite having scoliosis – and achieve more than even they can imagine. Shriners Children's locations are places where the apparently impossible is possible, and dreams become achievements. 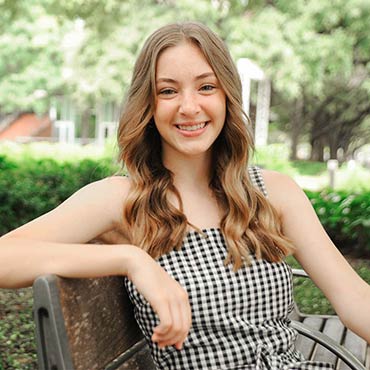 Sydney, who is from Oklahoma City, Oklahoma, learned she had scoliosis when she was 10. Her treatment began with bracing, but despite a strict exercise regimen and wearing her brace 23 hours a day for 1½ years, her curvature progressed. Searching for an alternative to spinal fusion surgery, Sydney and her family learned about the VBT treatment option.

Sydney had her VBT procedure at Shriners Children's Philadelphia in 2018, performed by Steven W. Hwang, M.D. "VBT has allowed Sydney to retain her flexibility and to get back to all the things she loves faster and stronger than ever," said her mother, Melissa.

Now 16, Sydney loves playing oboe in the school band, and enjoys painting and swimming. Sydney, whose great-grandfather was a Shriner, looks forward to continuing that family legacy as a National Patient Ambassador.

"To make my scoliosis journey a more positive experience, I had to reach out and to help others," Sydney said. "I said 'yes' to being a National Patient Ambassador because Shriners Hospitals has done so much for me, and I feel I could never repay that. That surgery has changed my life. It has shaped me to be the person I am today." 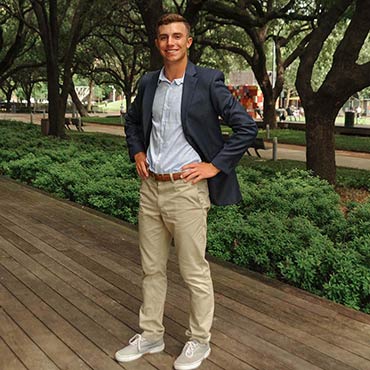 Seth was 11 when his doctor noticed a curvature in his spine. They began with a "wait and see" approach, and later treatment from a chiropractor. Still, the curvature of his spine quickly progressed to a severe degree. He and his family learned about Shriners Hospitals for Children from a social media group focused on the Vertebral Body Tethering (VBT) treatment for scoliosis.

Seth, who is from Fort Wayne, Indiana, underwent VBT surgery at Shriners Children's Philadelphia in 2017. The surgery, performed by Joshua Pahys, M.D., helped the young athlete quickly return to the playing field. "My pain has been reduced dramatically, my curvature is half what it used to be, and my flexibility is on par with my peers," Seth said.

Seth, now 17, enjoys playing many sports, including football, baseball and basketball, and is now focusing on competitive golf. "VBT has given me the opportunity to perform my best in athletics without the limitations of scoliosis;' Seth said. "The extra inch I gained on the operat­ing table didn't hurt on the basketball court either."

Seth is pleased and proud to have the opportunity to be a National Patient Ambassador for Shriners Children's. "I was impressed by the amazing treatment that I received at Shriners Hospitals, and I would be honored to guide someone to their care:' Seth said. "It will mean a lot to me to give back to the Shriners community because of the gift that they gave me." 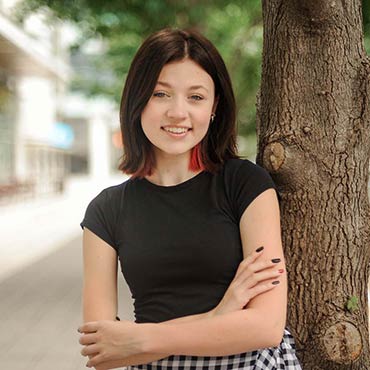 Mia, 17, was born with a severe case of infantile idiopathic scoliosis. Her journey with Shriners Children's began at age 2, when she was first seen at the St. Louis location. Mia's treatments have included halo traction to gradu­ally straighten and stretch her spine, as well as nearly 20 surgeries.

During her extensive time in the hospital, Mia and her care team developed a tight bond, and Mia considers the people she knows at Shriners Hospitals – her doctors, nurses, therapists and even the security guard – family. She has served as a patient ambassador for Shriners Children's St. Louis since she was 4, and has appeared in promotional videos and media interviews. Mia's passion is theater and singing, and she was featured singing I'll Be Home for Christmas in our holiday commercials. Mia is also part of the Shriners children's choir that performed in the recording of Foreigner's new version of their hit song I Want to Know What Love Is.

"I am so honored to be in this position:' Mia said. "For as long as I can remember, I have always loved Shriners Hospitals. Not just because of the life it has given me, but the real love that comes from it. This community consists of the best people, and it truly makes my heart soar to know I'm a large part of it." 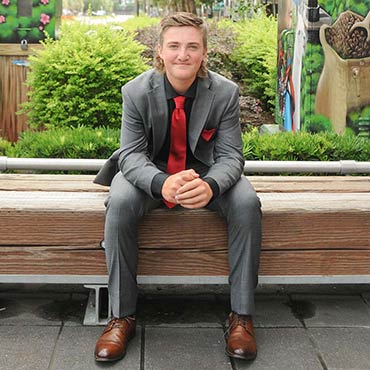 Connor, 15, was born with a bilateral incomplete cleft lip and complete cleft palate involving the hard and soft palate. As a newborn, his condition was so severe that he was unable to create the suction needed to feed and was failing to gain weight. That's when a Shriner recommended the family contact Shriners Children's Chicago. There, his RN care coordinator gave Connor's mother, Kelly, a special syringe, making it possible for her to finally feed her baby. From that moment, Connor began an extensive treatment plan of surgeries and interventions that will continue until he is 21, so that some repairs can be made after he has stopped growing.

Connor's condition affects not only his teeth and his ability to eat, but also his speech, hearing, and social and emotional well-being. He also has a connective tissue disorder that made it difficult for him to participate in contact sports. Connor umpires for youth baseball, is a physical education mentor for other kids with disabilities, and is an advocate and community volunteer. Connor is also a golfer. He has a busy training schedule and hopes to one day become a pro. Connor and his family are part of a local annual golf tournament that has raised more than $200,000 over the years for Shriners Children's.

"I want kids to know that no matter what they look like, or how they walk, or what makes them different – that they shouldn't let anyone else make them feel bad," Connor said. "I want to help other kids feel good about themselves and their differences." 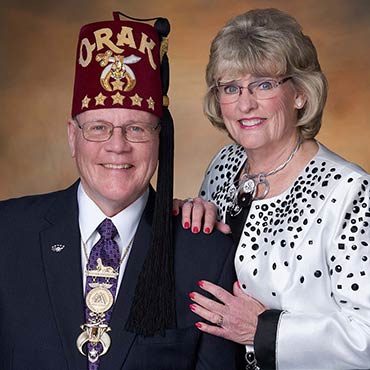 Bailey served as the leader of his local Shriners chapter in 2009 and has been on the fraternity's international board for 10 years. He serves on many international level committees and is the liaison officer for several locations in our healthcare system. In 2005, he received the Award of Merit, the highest honor of the fraternity. Bailey is Vice President of Investments for Marcus & Millichap in Chicago, where he sells commercial investment real estate.

Debby has taught blind and visually impaired children for 33 years. She is also active in Masonic-affiliated women's organizations. As First Lady, Debby leads a fundraising effort benefiting Shriners Children's. Her program, Transforming Lives, shines a light on the amazing contributions that Shriners Children's brings to the field of scoliosis care. 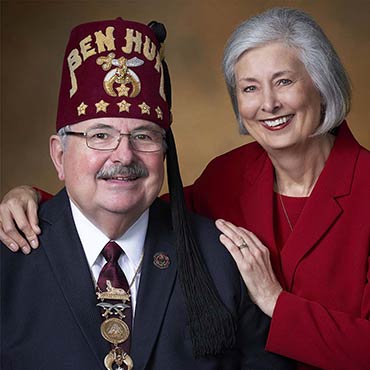 Smith became a Mason in 1999, a Shriner in 2004 and served as the leader of his local Shriners chapter in 1999. He is currently a member of Shriners Children's Board of Trustees and also serves on several international level committees.

Smith grew up in Racine, Wisconsin, and for more than 30 years he worked in the material handling business. He and his family lived in Wisconsin, Minnesota, Illinois and on the East coast, eventually purchasing a fuel company in Phillips, Wisconsin.

As First Lady, Alice led a fundraising program called Rising Stars that supported the availability of adaptive and assistive technol­ogy that helps Shriners Children's patients achieve their goals and become as independent and self-sufficient as possible.

Jim and Alice live in Georgetown, Texas, and have been married for 49 years. They have a son, Jason, and a daughter, Abby, and five grandchildren: Lynn, Grace, Jacob, Josie and Lincoln. The fraternal tradition continues in the Smith family as both Jason and Abby's husband, Greg, are also Shriners. 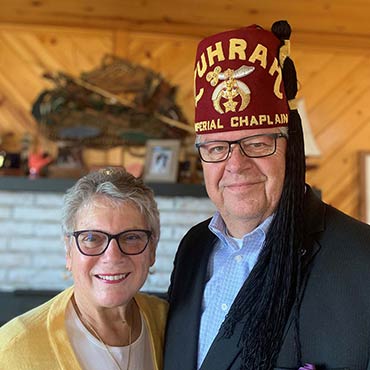 Jerry Oliver and his wife, Peg, live in Rush City, Minnesota. Oliver serves as Imperial Chaplain for Shriners International. In his position, Oliver leads the invocation and benediction for all international level Shriner events.

Oliver is a Master Mason and has served in many leadership positions among the Masonic family organizations of which he is a member. He was Potentate (leader) of Zuhrah Shriners temple (chapter) in 1997, has been a member of every Zuhrah committee, and takes part in many other temple activities including the ceremonial unit pipes and drums and Legion of Honor. He also served on the Shriners Children's Twin Cities Board of Directors for 15 years.

Oliver is the Director General of the 2022 Imperial Session of Shriners International in Minneapolis, Minnesota. He, along with a committee, is responsible for planning this annual gathering of Shriners.

Oliver is a United States Navy veteran. He retired after working for over 40 years in the steel fabrication industry. He and Peg have been married for more than 47 years, and they are the proud parents of two children, Laura and Brandon. 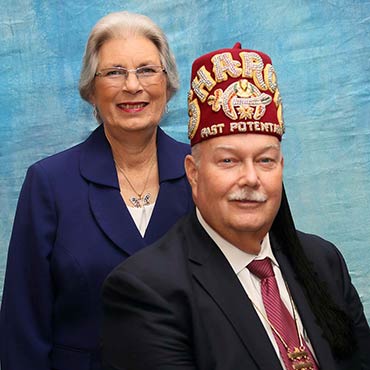 Hamm is a second generation Mason and Shriner, following in the footsteps of his father, Denver Hamm. He served as Potentate (leader) of Sharon Shriners in 2012 and has been the Treasurer since 2014. He is active in other groups within Sharon including having served as Drill Captain and Colonel of the Jeep Patrol and Ritualistic Potentate of the Ceremonial cast. He is also active in the Texas Shrine Assiciation where he served as President in 2012, Secretary-Treasurer of the Texas Shrine Directors Association in 2013 and Secretary-Treasurer of the Texas Shrine Shotgun Sports Association in 2019. His wife Charlene is a member of Sharuhan Temple No. 127 Daughters of the Nile and served as the Queen in 2009.

Hamm served for 20 years in the U.S. Navy and is a qualified Submariner. He was awarded three Navy Commendation Medals, two Navy Achievement Medals, five Good Conduct Medals and various service and campaign awards. He is currently employed as the National Director of Safety and Compliance officer for MagneGas Welding Supply.